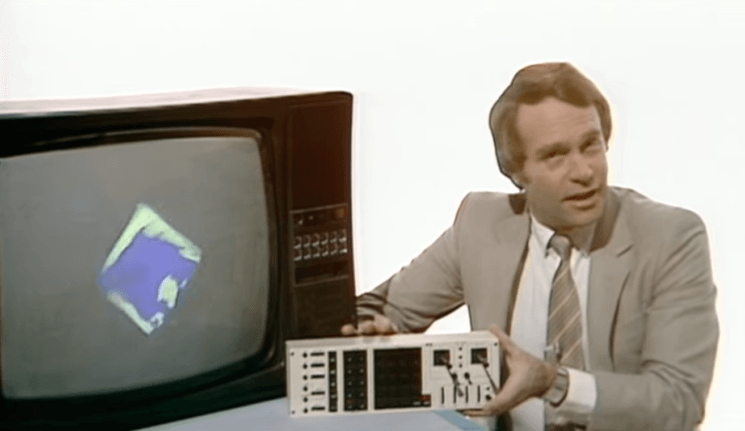 Computer generated graphics has been in our lives for quite a while now. We can’t accurately predict what it will bring in 35 years, but we can go that far into the past and see where it all began.

This video from BBC’s show Tomorrow’s World demonstrates the beginnings of CGI in 1982. The witty presenter Michael Rodd explains and illustrates what it looks like to transform a 2D image into a 3D model on the television screen. And it’s pretty impressive to watch the very beginning of what’s so common nowadays.

Before the computer generated effects, the only alternatives to making a model had been film animation. It would take two weeks to draw each frame, photograph and animate it for a short news sequence you can see in the video.

Before the ancient CGI, you could have seen different effects, but in 2D. They were created when 625 lines of the television picture would get rearranged to show different shapes. Like when the host “becomes the star of Australian television” and turns upside-down on the screen.

The CGI controller took the leap into 3D, as Rodd explains. It divided every line of the television picture into 1,000 points. This means there were 625,000 points and you could rearrange them in the screen as you like. The host demonstrates the revolutionary effects on still images, but on a video as well. I wasn’t even born when this was invented, but I remember these effects from some videos and commercials that ran on TV when I was little.

Over the course of 35 years, computer generated graphics has gone a long way. And 35 years is not really that much of a time for such a huge technological advancement. Who would have thought that, from making the flat world into a spinning sphere, we would get to raising people from the dead with help of CGI? And who knows what the future holds. Still, I always find it impressive and awe-inspiring to see the beginnings, when some of the revolutionary inventions of technology were just being born.

« Photographer shows dogs from underneath in this fun photo series
How to get that cinematic look with an f/1.2 lens in bright sunlight »