One of many double standards oddities of Instagram is that it doesn’t allow nipples, but only if they’re female. Not even a famous movie director like Pedro Almodóvar can’t post a female nipple on the platform. After sharing a poster for his new movie Parallel Mothers, the director had it removed “because it violated Instagram’s nudity standards.” But did it really?

The movie poster features a lactating nipple (a female one, obviously) in an eye-shaped frame. Since no nipples are allowed on Instagram (unless you’re a guy), the post quickly got removed. However, Instagram soon realized the mistake and apologized. “We do, however, make exceptions to allow nudity in certain circumstances, which includes when there’s clear artistic context,” Instagram said in a statement. “We’ve therefore restored posts sharing the Almodóvar movie poster to Instagram, and we’re really sorry for any confusion caused.” 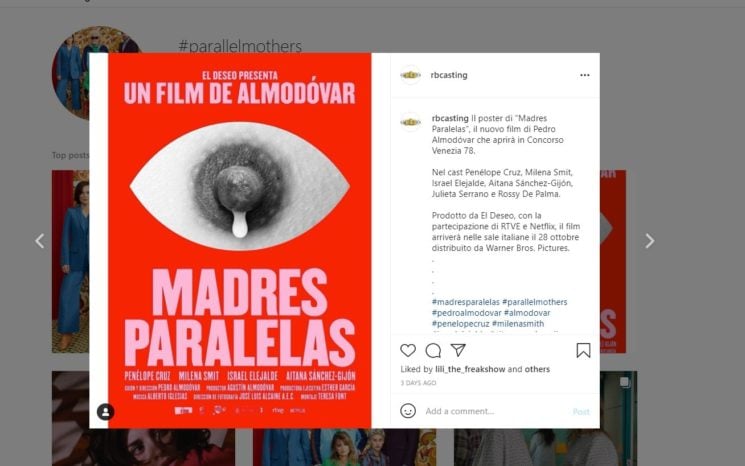 Javier Jaén is the designer of the controversial poster. In a statement to AP, he said. “[Almodóvar] told me that he had made films with posters his whole life, long before Instagram, and he would keep doing so after Instagram, too.” So even though they were aware of Instagram’s rules, they agreed to still publish the poster, which I totally support.

Now, for “breaking nudity standards.” The content that’s considered as “sexually suggestive” is something that Instagram filters out, but doesn’t remove. It’s a part of the so-called “sensitive content,” which you can control yourself since recently. However, the poster was removed, which is something I have a problem with here.

“Where such intent is clear, we make allowances for the content. For example, while we restrict some images of female breasts that include the nipple, we allow other images, including those depicting acts of protest, women actively engaged in breast-feeding and photos of post-mastectomy scarring. For images depicting visible genitalia or the anus in the context of birth and after-birth moments or health-related situations we include a warning label so that people are aware that the content may be sensitive. We also allow photographs of paintings, sculptures, and other art that depicts nude figures.”

“Uncovered female nipples except in the context of breastfeeding, birth giving and after-birth moments, health-related situations (for example, post-mastectomy, breast cancer awareness or gender confirmation surgery) or an act of protest.”

What I see here is “uncovered female nipples in the context of breastfeeding, birth giving and after-birth moments.” What Instagram initially saw was, obviously, sexual activity, considering that the post was removed. I guess someone missed the primary purpose of female nipples, which has nothing to do with sex.

To be fair, someone at Instagram has realized the mistake and brought the poster back, and I respect the decision. But I can’t help but remember the time when they censored Rubens’ paintings, ancient Roman statues, The Venus of Willendorf, and my favorite – onions! Because of those cases, Instagram and Facebook have refined the nudity policy so that it doesn’t happen again… But it looks like there’s more work to be done.