Benjamin Von Wong, Montreal Based Photographer here to bring you guys yet another post for DIY photography! 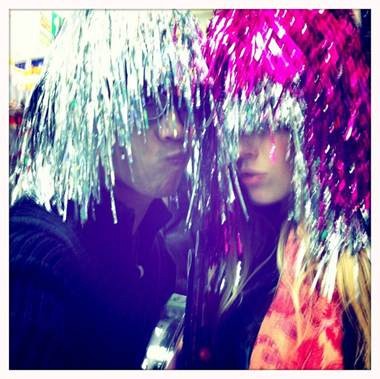 Recently, I’ve been looking for simple ways to improve the production quality of my Behind the Scene videos and one of the things I noticed that were lacking were some smooth rail pans that you see pretty much in any professional production.  Unfortunately, I did not have the 1000$+ required for a set of real professional sliders such as the Cinevate Pegasus so I began searching for affordable alternatives… which is where I stumbled upon the IGUS Camera Sliders. IGUS is a plastic development company and one of their products just happens to be an oil-free low friction camera slider with various DIY options… even better, they were extremely competitively priced varying between 130-210$ for a 3 foot piece of rail/slider system!

Personally, I’ve never been much of a DIY type of guy and I wasn’t relishing the idea of poking my own holes into metal, I went for the easy way out and purchased the IGUS W1080-B which came pre-drilled and capable of easily supporting a dSLR and medium sized zoom lens. Paired with a Manfrotto 701HDV, and tripod I already had, the total came up to less than 300$ for a full rail system including head, slider and rail for an extremely well constructed and efficient system.

In an ideal world, I would have two heads, one to control the angle and tilt of the rail and one to control the camera head but since I was on a pretty tight budget, I had the rails screwed directly onto to the tripod by simply rotating it on! It did make it hard to angle & balance the rail at times but remained perfectly adequate for the job.

One of the things I liked about the rail system (more of a bonus than anything else) is that it could be placed on a flat surface and that it would still slide smoothly back and forth eliminating the need for having an additional mini-tripod system You can see me use that technique effectively with a wide angle Tokina 11-16 for quite an odd POV at 1:17 in the video.

Overall, I have to say that I was rather pleased with the rails: It’s lightweight, easy to transport, very simple to use and simply does the job. I did find it was slightly fragile so I would highly recommend transporting it in a case. In addition, I did notice that there was a slight but distinct noise when sliding the camera around… so if you record audio, that’s definitely something to keep in consideration. That being said, price/quality ratio, I do not know of any system that comes even close to the quality you are getting. Check out the footage in the BTS and judge for yourself and if you like it, click here to check out the various IGUS Camera Sliders models available!

I also wanted to take a couple lines to actually talk about the DIY bokeh that I created to make the review more exciting. Since I didn’t want to just do a plain old review, I was trying to think of a random but creative way to do something original. I’m not quite sure where the idea sprang from, but I figured I really wanted to attempt and create spontaneous bokeh. Initially, I had planned on using glitter purchased from dollarama, but finally, while waltzing around the dollar store, I settled on these metallic wigs instead.

We cut them out during the shoot, and threw them around while shooting wide open at f1.4 or f1.8 to get the neat bokeh effect. The only problem we had was figuring out how to light both our subject as well as the background properly. That being said, I was quite happy with the final results and though that things actually turned out reasonably neat… with the shots looking like they were taken outdoors on the street, when in reality they were entirely built in studio with a set of hot lights I had never used in my life! 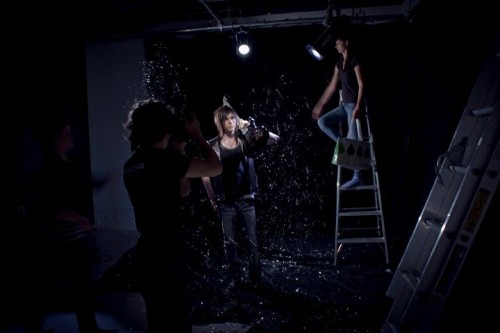 While we were at it, I figured that since my model Yameki actually looked kinda sad in some of the shots, that it would be interesting to create a rain effect so we poked some holes in a water bottle and had Jess standing on a ladder shake it above his head to create rain! Combined with a reasonably slow shutter (1/60th) I think we managed to get some pretty convincing rain effect.

Here are some of the shots, hope you enjoy them! 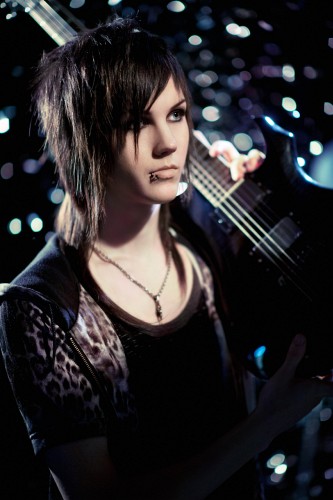 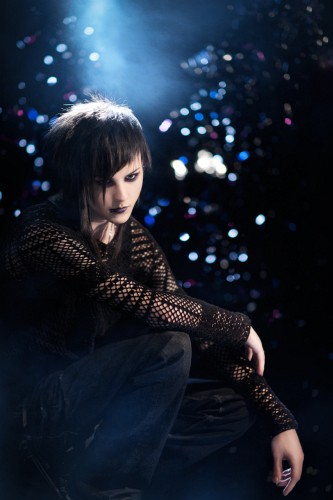 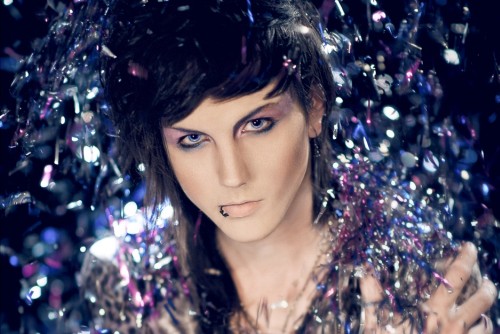