I always love playing with light, creating new techniques or finding a new gadget to help my images stand out from the crowd. I also love creating mood and texture with my light. So I would like to share with you two pieces of kit that are always at hand in my studio when I need to produce that slightly different portrait.

My two ‘go-to’ items when that extra bit of mood or atmosphere is needed are the Light Blaster from Spiffy Gear and the Universal Focus spot from Bowens. Though they produce different results, they are both similar in the fact they create unusual and sometimes bizarre light patterns. The Light Blaster uses simple slides or old fashioned transparencies to achieve this result whereas the Universal spot utilises Gobo’s and pattern cut-outs. 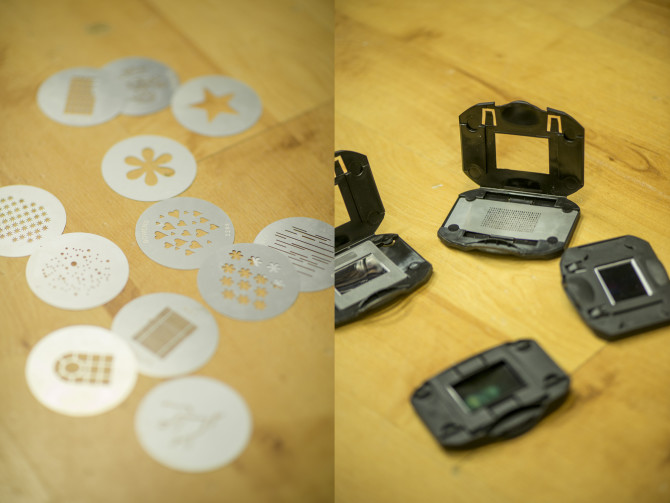 lightblaster slides and gobos for the Universal spot attachment

So first off we have he Lightblaster – simply put it is like no other light modifier I own! It can be used with either a shoe-mount flash or a studio strobe and when paired with a camera lens, the Light blaster allows you to project an image from a slide onto any surface. Pretty cool – off course this can have endless possibilities! In this first example I used the lightblaster mounted onto a studio strobe via the Universal Studio Adapter also supplied by Spiffy Gear. I used a very simple slotted blind slide to produce a very simple but effective image. 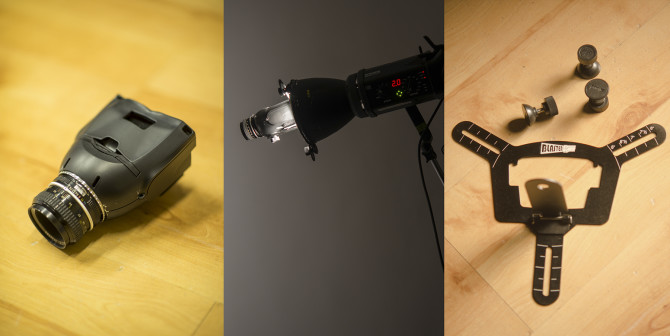 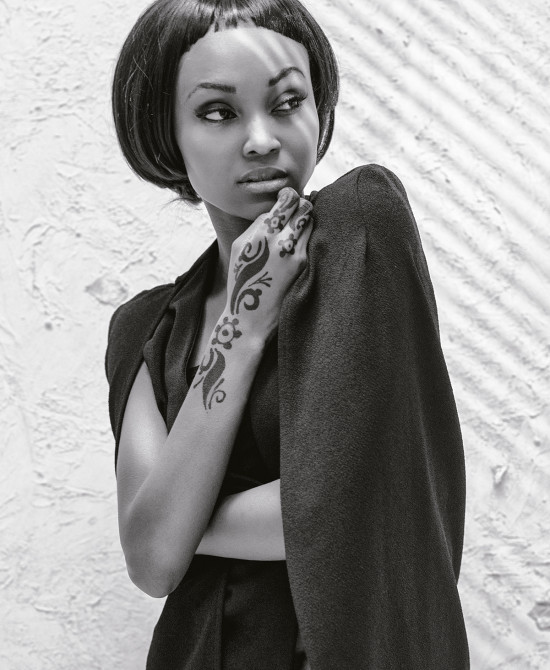 Next up I used the Bowens Universal Spot without any Gobo inserted at this stage. This produces a very stark but crisp sharp light. 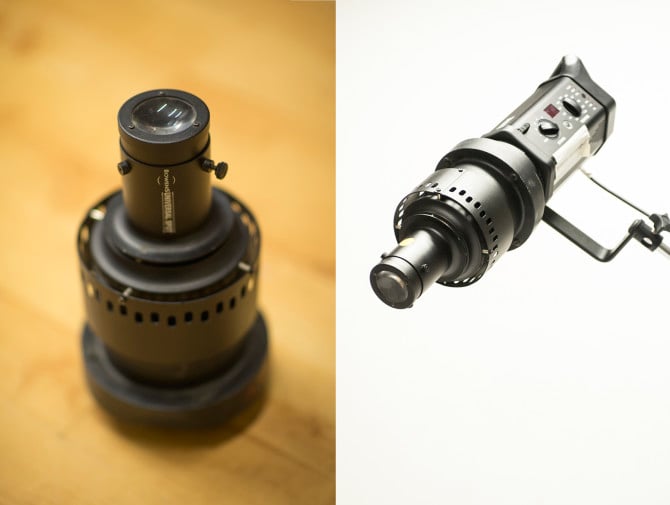 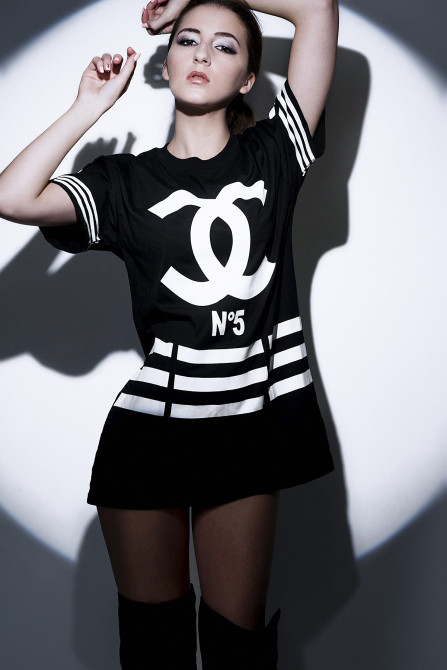 So now we can start to get creative! First off using the standard Gobos with the Bowens Spot. This example uses the dotted effect Gobo. 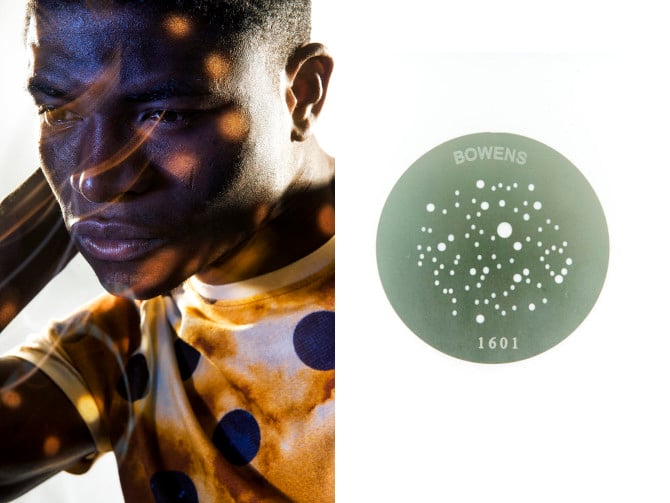 These can look cool but I much prefer to customise my own Gobos using Black Cinefoil. Cinefoil is made from a non-reflective aluminum material that virtually “soaks up” light. Ideal for masking light leaks and/or eliminating unwanted reflections, it can also be quickly shaped to form barndoors, flags, and in this case Gobos. I cut simple shapes into the foil and moulded them into the Bowens Spot Gobo holder. 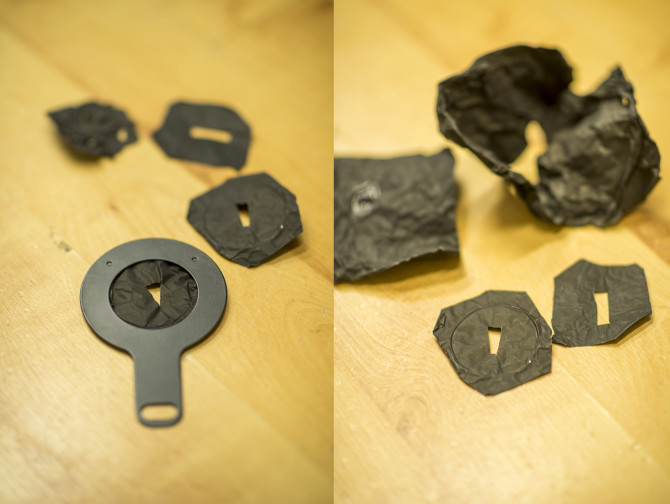 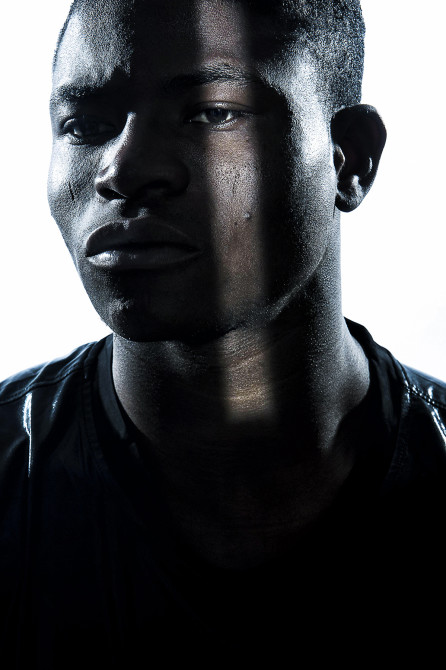 In this example I simply cut a small rectangular slice out of the cinefoil and projected the spot onto the subject to create very dramatic lighting. 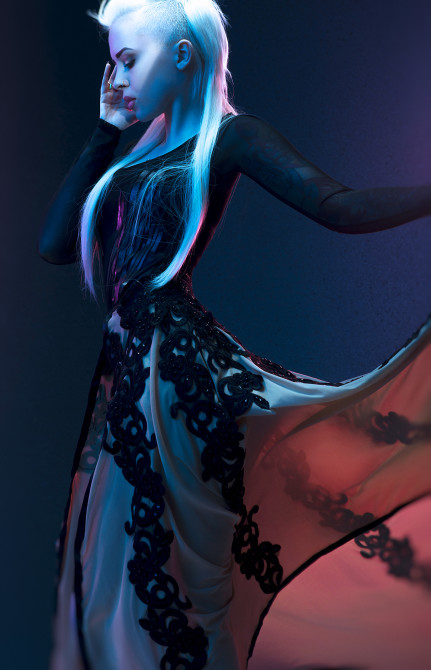 In this example we used gelled lights to light the torso of the model and the Spot with a triangle shape cut into the Cinefoil to create a hard diagonal shaft of light across the face.

The Light Blaster comes with some pretty awesome slides – I particularly like the wings set. When projected onto the background some amazing images can be created. 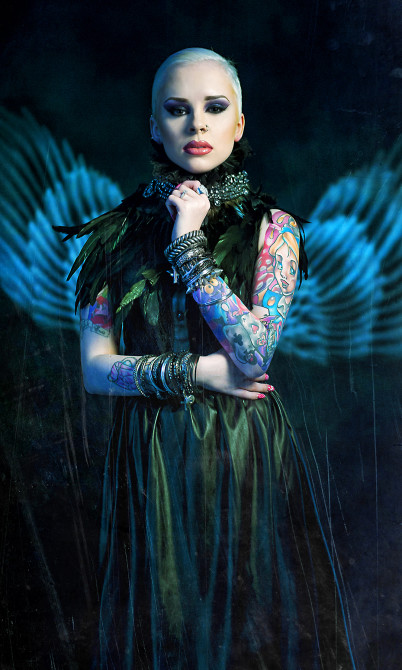 And off course backlighting the subject can produce equally fantastic results. 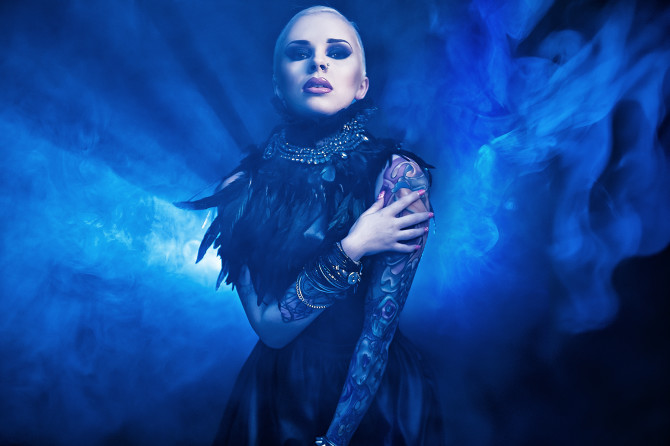 As with the Bowens Spot, I like to customise the slides I use with Light Blaster as much as possible. Using a service like Digital Slides, I can create my own slides from any image I might have – kinda cool eh… 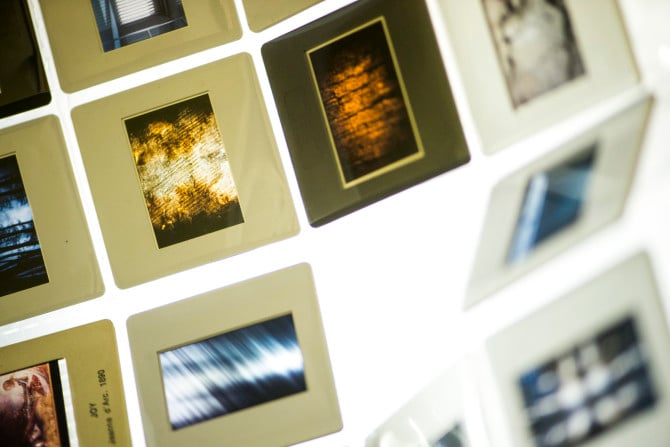 So now we can create some really unique looks…. 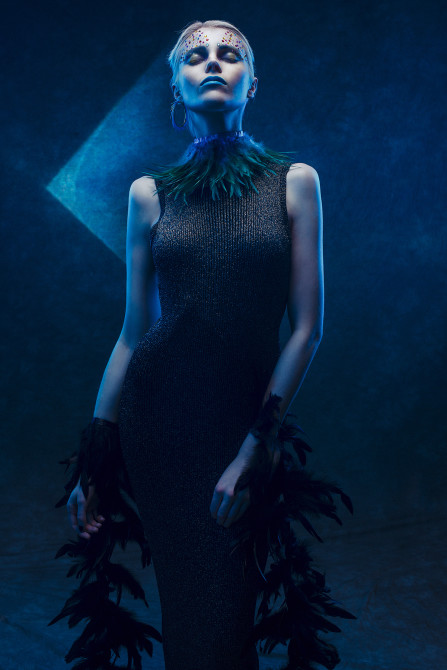 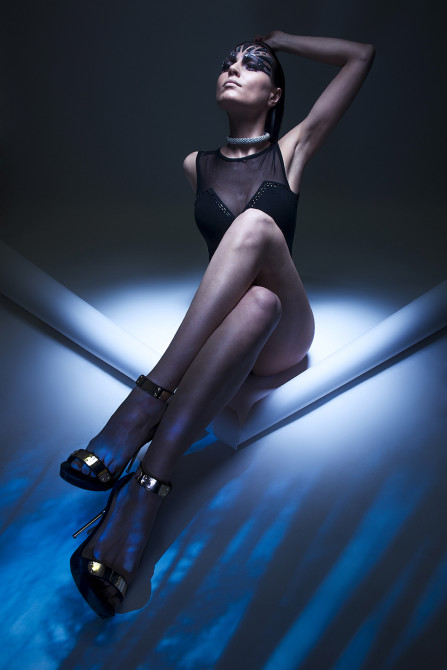 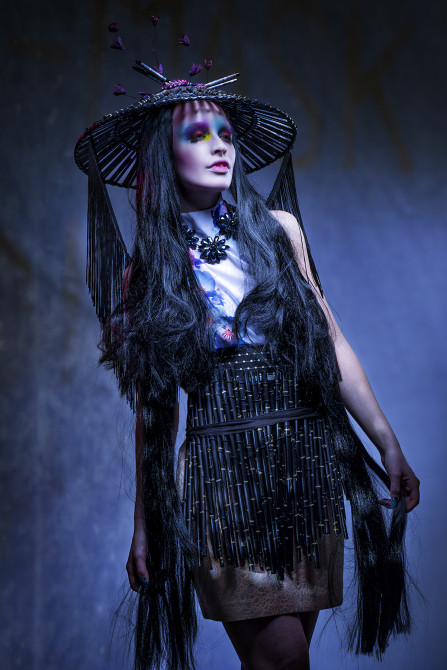 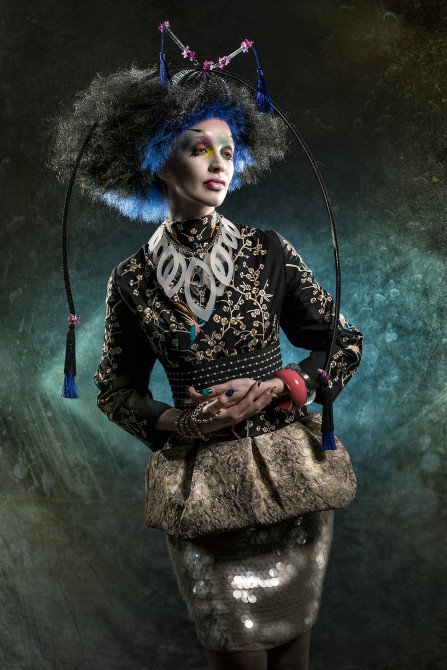 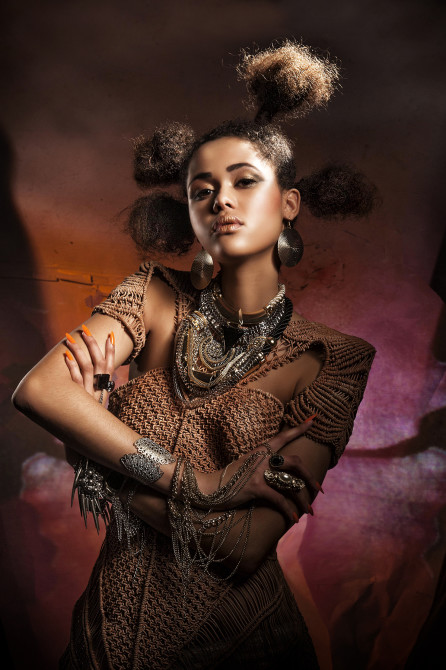 And finally what I really like to do is shoot with both the Light Blaster and the Universal Spot to create uber creative shots. In this example we have the triangle cut Cinefoil Gobo inserted into the Spot and the Light Blaster skimming the model and pushing light onto the background to create a wonderful rich texture. 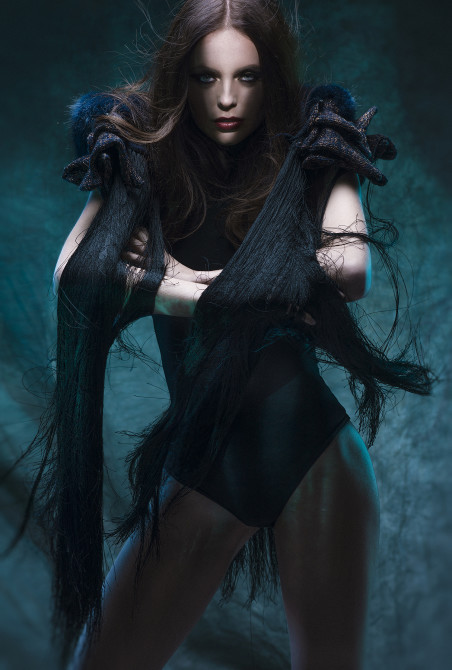 Thinking Outside The Box: Creative Use For A Speedlight And Pack Of Gel Filters

Lighting Techniques: All the Things you can do with One Speedlight

Glenn Primarily works as a social and fashion photographer specializing in editorial, advertising and portrait photography, based in Belfast, Northern Ireland. You can follow him here.

« Canon rumored to be working on a new 70-200 L lens
Backup Quick Tip: How To Move Your Dropbox Pro Folder If Your C Drive Is Full »