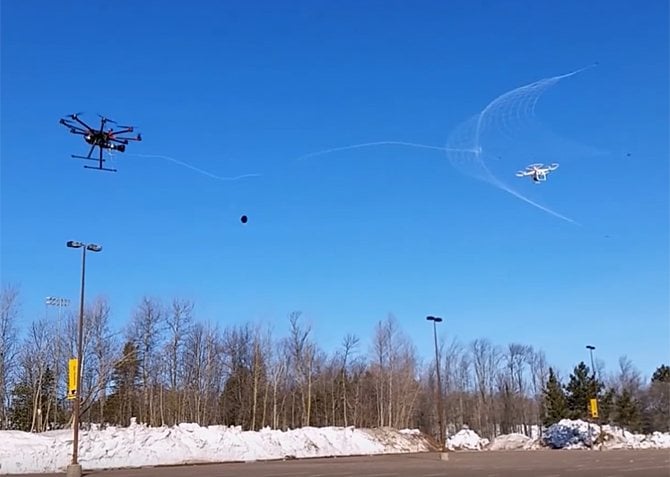 Irresponsible and ill-intentioned drone operators continue to pose safety and security hazards, and researchers continue to develop inventive ways of taking out the rogue devices.

Developed by Michigan Tech’s HIRo Lab (Human-Interactive Robotics), the Drone Catcher fires a net at other drones and catches them mid-air.

The Drone Catcher system is a patent-pending proof of concept prototype intended to “intercept and physically remove the intruding multi-rotor drones from the protected areas,” HIRo Lab wrote on YouTube.

According to Michigan Tech, Mo Rastgaaran, associate professor of mechanical engineering at Michigan Technological University, came up with the idea when he was watching World Cup soccer and heard there were snipers protecting the crowd.

“I thought, ‘If the threat is a drone, you really don’t want to shoot it down—it might contain explosives and blow up. What you want to do is catch it and get it out of there,’” Rastgaar said.

The Drone Catcher flies up to the intruding drone and like a flying version of Spiderman it fires a net to catch its target, without posing a safety risk itself. It can be controlled by a human pilot, work autonomously or a mix of the two.

The net can be launched from up to 40 feet away and thanks to its size and speedy deployment, developers say it can “overwhelm even the fastest, most maneuverable small drone”.

Other solutions, such as the Dronedefender and NASA’s Virtual Safety Net, allow you to force-land invading drones, but the Drone Catcher offers a solution when force-landing or shooting (your neighbor’s) drone out of the sky is not an option.

We’ve recently seen another drone-hunting drone from Japan which will also retrieve or remove the other drone, but the Drone Catcher seems to be less cumbersome; not to mention a hell of a lot cooler.

This Gravity Defying Set Will Give You Spiderman Like Powers

Photographer light paints Baby Yoda in the sky with a drone

« Uploading Videos To YouTube? You May Be Shut Down for Title Trademark Infringement
Again?! GoPro sued by Contour for patent infringement »