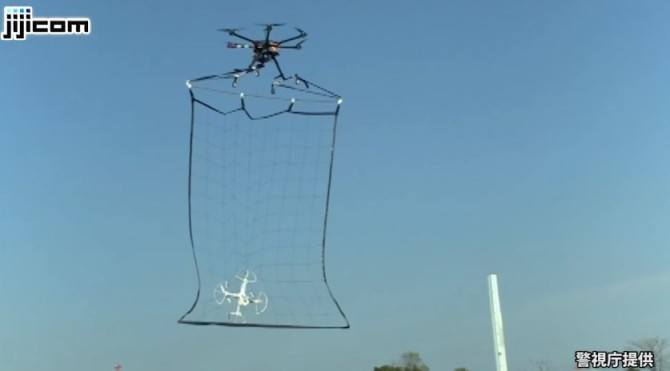 December is just not a month to be a drone owner. After the US decision to register all drones above half a pound, and now Tokyo Police are initiating a task force that will be able to net drones mid-air. How? Using a bigger drone, of course.

The task force was initiated after a drone carrying bottled radioactive substance landed on the roof of the Japanese prime minister’s office.

The hunter drone (for a lack of a better name) can deploy a 3×2 meters net that entangles the rough drone’s rotors and rendering it inoperable.

Paul Haswell, from legal firm Pinsent Masons, told the BBC that “In Japan, it is illegal to pilot drones over certain areas such as airports and power plants, over roads, or above a height of 150m” and that “Some cities such as Tokyo and Osaka have also outlawed their use in parks“, I guess this is similar to the US banning drones from their national parks, though we have not seen the US deploying any nets yet.

According to Nikkei, the drone capturing service will start at mid December, and will arrive full bloom at February with a force of 10 net throwing drones.

As a kid, I was always fascinated with car chases (sometimes rooting for the villains who could out run the cops), I wonder if we are entering an era of drone-chases.

« This Navy-funded drone can both fly and swim
Watch Frank Sinatra Brought To Life With A Hypnotizing 2.5D Parallax Movie »