Interviews can be a fun lighting challenge, especially when you need to go back and forth between two subjects; The interviewer and the interviewee. There are all kinds of elaborate lighting setups you can use to light two subjects and have them both looking great on-camera.

Sometimes, though, you’re limited on gear or space or setup time. In this video, filmmaker Rubidium Wu shows us a simple three light setup that gives short lighting on two interview subjects to great effect. 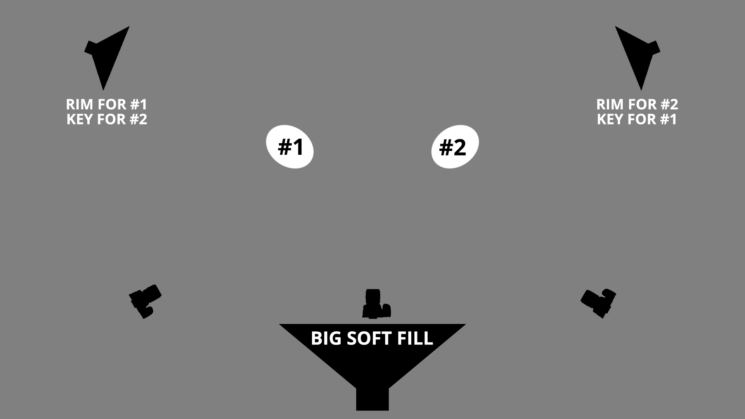 Besides requiring very little lighting gear, the other beauty of this setup is that it allows for three different camera angles with a single lighting setup. You’ve got your wide shot covering the whole scene, but then you can have cameras off to either side. A close up for each of the two subjects.

You’ll want to play around with your exact placement, though, to make sure that the lights acting as rims aren’t flaring into the two side cameras.

I’ve heard of the cross key technique before, but it’s not a lighting setup I’ve tried yet. I don’t get too many opportunities to actually light the scene when I do interviews. They’re usually at some show or other using whatever’s already there. But I think I might have to give this a try next time I shoot a sit down interview in a more controlled location.

Rubidium has some other great videos over on his YouTube channel, Crimson Engine. It’s well worth spending a little time there to look around.