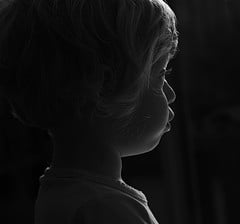 Last week I have talked about an important aspect of any picture – contrast. It was only natural to follow up with an article about low key and high lighting as both are tightly related to contrast.

After covering the definitions and some samples of High Key and Low key images, it is time to show some setups that will enable you to take High Key and Low Key pictures. I’ll start with Low Key images today and will follow soon with some High Key setups.

I started out by making those shots with my gorgeous blond model, but she kept moving and tossing her hair. I had no options but to call a more obedient model – Winnie the Poo (You know, the one who helped with the broad/short lighting thing). Working relationship were quite good, until he decided he want a bigger trailer. It took a long talk with his agent to straighten things up. 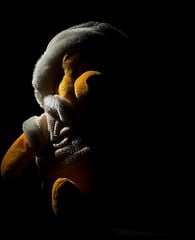 Setup number one – Side Rim Light. In this setup I used one small flash to camera left, behind the subject. I used a flash with a gridspot to control light “contamination”, and to make sure light does not get to any parts of Pooh. The gridspot also helped me to avoid any camera flare that the flash might have caused. This is a similar set up to the one used in the image at the top of the article (light is coming from back-right bounced of an umbrella)

As you see this lighting is quite dramatic. Light is only coming from one side (and from the back). Pooh’s left side (camera right) does not get any light at all, and is completely at dark. Nope. No details what so ever. The light on the Pooh’s right (camera left) is called rim light. This is because it lights the rim or curve of the subject.

This kind of setup is sometimes used when you want to create atmosphere of tension or mystery. 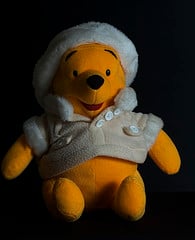 Now I’m gonna open a window about some other lighting. Feel free to skip it if you are only here for Low Key.

There is a really easy way to convert this Pooh-portrait to a less tense one. The portrait on the left has only one light – a key light on camera right. This light is diffused by bouncing off an umbrella. (Shoot through umbrella is also good for this). Now Pooh is well lit but the separation from the background is not that good.

Combining the two lights produce a nicer image move your mouse over the image above to see the two lights combined. (Window closed). You can also see a picture of the setup here. It was created with the tools in this article. 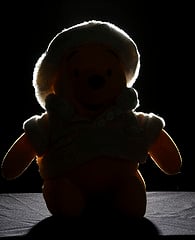 Setup number two – Hard Back Light – In this setup I placed a bare small flash (SB800) behind Pooh. The only light Pooh’s face is getting is a little reflection from the white wall behind me. This is why you get some details on the face, which is otherwise as dark as a black Heffalumps with no pink dots.

You can balance this light by introducing a second key light. I chose to use a flash with a mounted umbrella (again) to give some more details to Pooh’s face. As always this tape will self destruct in 10 seconds you can hover over the picture to see the results. You can review the lighting setup here.

In both images I used rim light lighting to emphasize the contour and shape of Pooh. I also used very little light on Pooh’s face. Rim light is a very powerful technique when trying to produce a Low Key image.

You can create rim light by pointing your light to the side or back of your object, and using gridspot, gobo or snoot to avoid light spillage.

The other notable aspect in both images is the high contrast. This was achieved by using direct hard flash where for the highlights, while using almost no lighting at all for the shadowed parts of the image.

How to create a low key boudoir – The Lighting Series #1