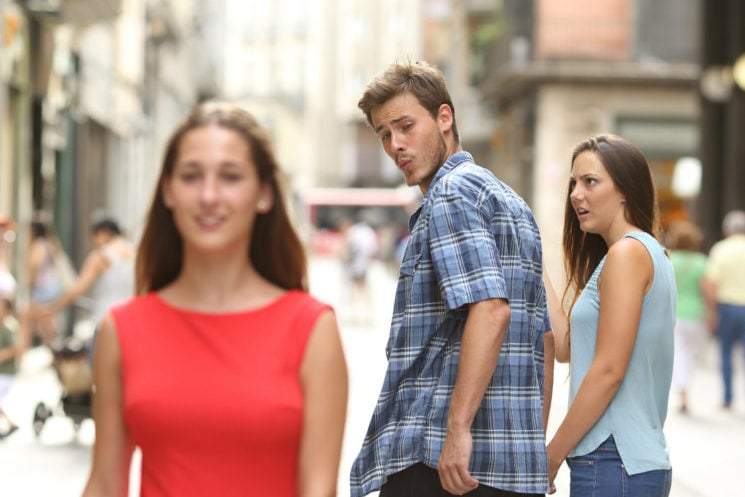 Unless you’ve been living under a rock for the past year or so, you must have seen the “Distracted Boyfriend” meme in some of its many forms. Its popularity means that plenty of companies have been using it – or variations on it – for cheeky social media ads. But after one of these meme-based ads appeared in Sweden, it was severely bashed online and was eventually determined sexist by Swedish advertising ombudsman.

The “Distracted Boyfriend” meme was created from a photo by Antonio Guillem. It grew so widespread and became such a phenomenon that it was voted meme of the year in April. Predictably, a number of companies used it to create ads on social networks, and even now, when the meme is a bit “out of fashion,” I keep seeing them. But when a Swedish company named Banhof used it to search for employees, they received feedback I don’t think they expected.

Bahnhof’s meme shows “you” (the distracted boyfriend), “your current employer (the shocked girlfriend) and “Banhof” (the woman in red dress the boyfriend is looking at). It was posted back in April, while the meme was still popular over social media. But instead of generating new employees, the meme only generated a ton of negative comments for Banhof, even death threats. The case even reached the Swedish advertising ombudsman, which pronounced the ad as “gender-discriminatory.”

According to the regulatory body, the ad “contradicts Article 4 of the International Chamber of Commerce’s rules for advertising and marketing communications.” The ombudsman suggests that the woman in red in the meme is “produced as a sex object” and “unrelated to the advertisement” which is aimed at recruiting salespeople, operating technicians and a web designer. Both the ombudsman and the commenters agreed that the ad is “sexist” and “imparting a stereotype picture of men looking at women as being interchangeable.” Although, the people who commented were way harsher in the expressions of their opinions, as usually happens online.

Despite the observations from the ombudsman, the “sexist ad” hasn’t had any repercussions for Banhof. The Swedish advertising industry is self-regulating, so the ombudsman doesn’t have the power to impose any sanctions.

On the other hand, Banhof explained that it was trying to “visualize the job search process in a humorous way.” The company adds that it didn’t try to “read gender roles or gender characteristics of anyone.” The Guardian reports that Banhof “explained meme culture to the ombudsman, but it chose to interpret the post differently.”

You may disagree with me, but I think this is much ado about nothing. Don’t get me wrong, I don’t support sexism by any means and I’ll never understand ads that try to sell you random stuff by putting an attractive girl on a billboard. But when it comes to meme culture, I think things become a bit different.

You need a specific sense of humor for memes, and it requires you to be open-minded and not easily offended. Memes are often politically incorrect, sexist and what not, but I don’t think they’re ever aimed at offending anyone. So I don’t think that Banhof had any sexist intentions with this ad. It just jumped on the bandwagon while everyone was making their own versions of this meme, but I guess it was badly misunderstood.

The girl from the “Distracted Boyfriend” meme is always totally shocked