Mythical creatures are a part of every culture on Earth. From yetis, mermaids, satyrs, and centaurs, to fairies, nymphs, sirens, and krakens– all of them inhabit our literature and spur our imaginations. The Loch Ness Monster of the Scottish Highlands, the chupacabra of South America, and Bigfoot in the Pacific Northwest have inspired pointless quests to prove their existence. Although I’m reasonably sure that vampires actually do walk the streets and back alleys of New Orleans, the rest shall remain a mystery.

There is one mythical creature, however, that I feel compelled to pursue. Although I don’t think I’ve ever crossed paths with someone who has actually completed a 365 Project, I’m told that such beings actually do roam among us.

The truth is out there.

In all seriousness, though, before I go any further I have to publicly applaud any photographer who has managed to complete what many consider to be the apex of all personal photography projects. If you are reading this and you are one of the precious few, please stand up and take a bow. I salute you. 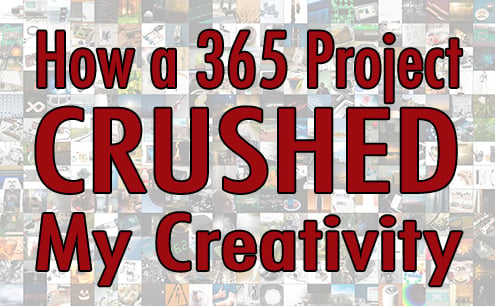 Every December, we are swamped with articles about how to get out of our creative rut and reinvigorate our photography in the coming year. It seems as if the 365 Project is almost always at the top of these lists. It sounds like it ought to be easy, right?  A picture a day. A snap. A click. Takes no time at all.  I’m a professional. This is what I do. I should be able to walk out my front door armed with nothing but a throw-away film camera and capture something meaningful, right? Absolutely. Sign me up.

The typical 365 Project usually revolves around a theme of some sort. Whether it’s “things that start with the letter Q,” “morning,” or “leading lines,” the goal of the project is to improve your photography while pushing your imagination and your boundaries. After all, one of the most popular pieces of photography advice– and the one I preach to my students all the time– is to simply “get out there and shoot.”

So, where could it possibly go wrong?

The simple truth is that we’re photographers. Artists. Sure, we can take snapshots, but we’d rather “create images.” If we’re not going to put in the effort, why bother? And effort, my friends, takes time. Planning it. Shooting it. Processing it. Posting it. At its most basic, those four steps actually take up a considerable amount of time. And time means pressure.

Between being a photographer, a business owner, a writer, a husband, father, friend, son, brother, and teacher, I’ve got a pretty full plate. Now you’re telling me that to elevate my photography I have to undertake a project that’s going to consume even more of the little free time I have left? Every day?

I’ve tried. One year it was cars. Then it was doors. Another it was “10 Minutes from Home.” “Purple Stuff”– that one was fun. For about a week. I’ve managed to (mostly) expel the other attempts from the recesses of my mind 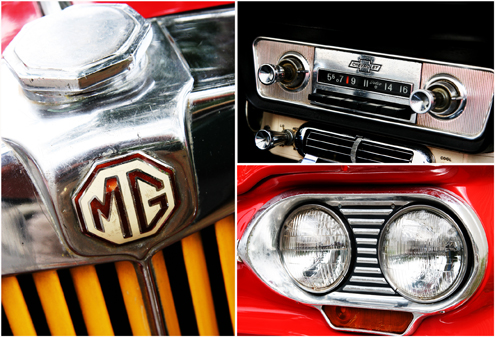 So, What Went Wrong?

Combine being a bit of a perfectionist with the pressures of time constraints and you too can bear witness to the pile of my failed 365 attempts. Watch your step. It’s a precariously balanced pile.

The first week or two usually goes okay. I’d spend a good chunk of December planning ahead– giving the project the attention and thought that it both needs and deserves. If I’m lucky– and we’re talking VERY lucky– I somehow manage to make it to February with all 31 of January’s photos. By now, the pressures of the planning and the shooting and the processing and the posting are mounting. Daily. So, what’s the big deal if I skip today’s photo and just take two tomorrow? Nothing wrong with playing a little catch-up, right? Of course not.

By now we’re heading into March. If I’ve been VERY, VERY lucky it’s not a leap year and I have 59 days worth of photos. Who cares that I shot the entire last week of February on the March 1st? I can still get back on track. But now my wife’s birthday is right around the corner. Then my son’s. We’re heading into spring and wedding season is about to start. I need to critique 23 student photo essays and keep up with my writing schedule. My plate runneth over.

Time = Pressure. I’m usually okay with that when it’s for a client, art director, or editor. Basically for anyone other than myself. But by now it’s the middle of March and the pressure of coming up with yet another creative image of a clothes pin is starting to choke the joy out of this project. I’d be okay with that, but the crushing blow to my creativity starts spilling over into everything else. The band shows up for their photo shoot and I’m stumped. The author needs headshots for the cover of his new book and it’s like I’m doing this for the first time.

Time = Pressure = All-This-for-Some-Stupid-Project? Unfortunately, by now the damage is done. One more 365 Project for the pile. 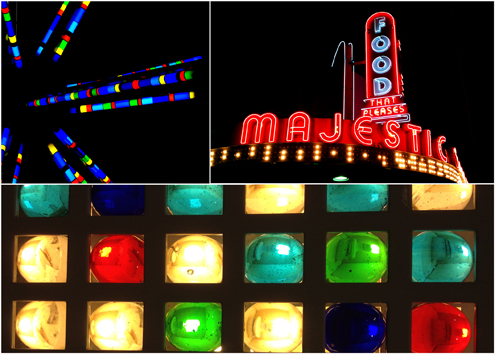 Are You Saying it Can’t Be Done?

Absolutely not. As much as it pains me to admit defeat, I’m saying it probably can’t be done by me. At least not in the way it deserves to be done. I think the best projects– of any kind– start very organically. I didn’t set out to photograph objects that look like the alphabet. One day I just realized that I’d been doing it. Without a time limit and the pressure of creating something every day, a few random images evolved into an idea, which turned into a project all on its own. Without the confines of a calendar-shaped box, I’m able to not only get the photos, but to also make sure they are of a higher quality than time-restrictive projects usually allow.

DIY Photography’s own Laya Gerlock took us through his 365 Project last month. Be sure to check it out if you missed it.

Not only can it be done, but editorial and corporate photographer Mark Hirsch did it bigger, bolder, better, and more badass than anyone I’ve ever seen. When Mark got his first iPhone in 2012, a friend told him about all of the updated camera features. As many of us have at one point or another, Mark scoffed at the notion of using the camera on his phone for anything of any importance. During a January snow storm, though, Mark took his very first iPhone photo. His subject was a 163-year-old oak tree on the edge of a Wisconsin corn field about two miles from his home. Despite driving past the tree every day for almost 20 years, he’d yet to take its photo. The project would not officially launch until almost two months later, but a truly incredible 365 journey began that day. 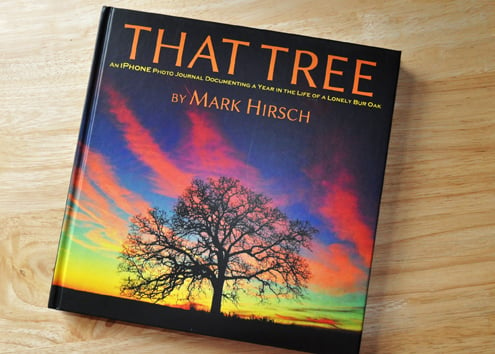 The end result of Mark’s project is a 192-page compilation of all 365 images (every one of which was taken with the iPhone), and a testament to one photographer’s “newfound vision, and appreciation for the fragility of our world and the interdependence of even the smallest of its creatures.” His project became a mission. He was personally and philosophically invested. I think that could be why I’ve never managed to complete a 365. For me, those 365 frames need to be about more than just the number.

Down But Not Out

The 365 Project has bested me time and time again. And yet, every December I can’t help but wonder if this is the year. Motivation, inspiration, and dedication all ebb and flow, conspiring against me with a variety of stumbling blocks, strategically placed between my lens and the December 31st finish line. Thankfully, crushed creativity is resilient and bounces back. I love personal projects. They are so important to developing and nurturing our creativity. If you are working on a 365, I wish you all the best. Tell us what you’re up to in the comments.

As for me…There’s always next year.

“That Tree” is available on Amazon.