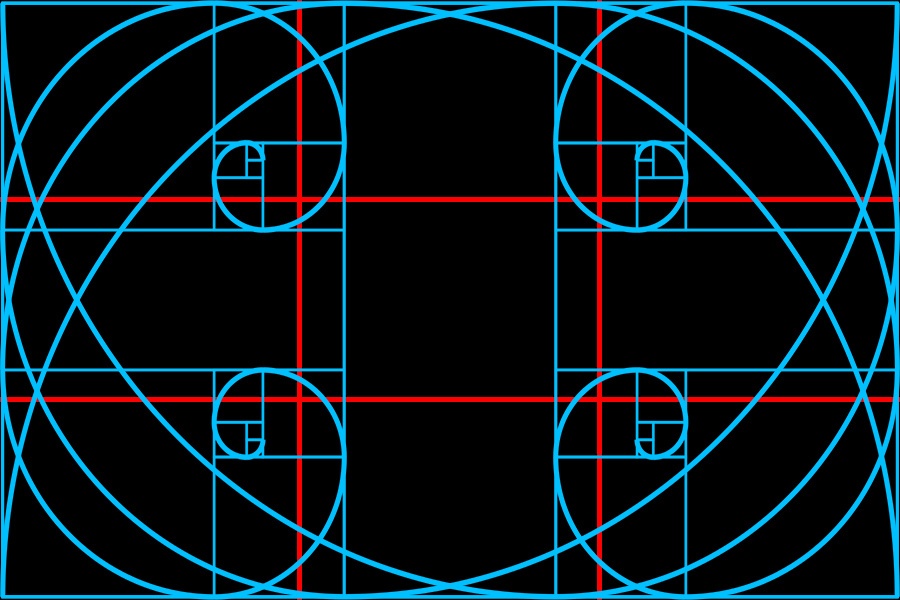 Here’s the reason they don’t put the spiral as an overlay on your camera – The spiral in just four of its eight possible orientations.

A long time ago I was a young art student, being told about the “Rule Of Thirds”. I was told it’s one of the most important fundamentals of art and photography, as it helps you get the right composure in your images. Overlay a tic-tac-toe/noughts and crosses grid over your image and crop or move your picture around so that the “points of interest” lie on the lines or line intersections. Sounds simple, it has been the basis of countless millions of images throughout the centuries. But is it perfect? No! Is there a better, more badass brother to the grid? Yes! Enter the Golden Ratio.

Just to slow things down a bit, here’s what the Rule Of Thirds (I’ll call it the ROT grid from now on) looks like on a plain black background. Chances are you’re familiar with it, you’ve seen it pop up on your cameras viewfinder or as an overlay in Photoshop or Lightroom. 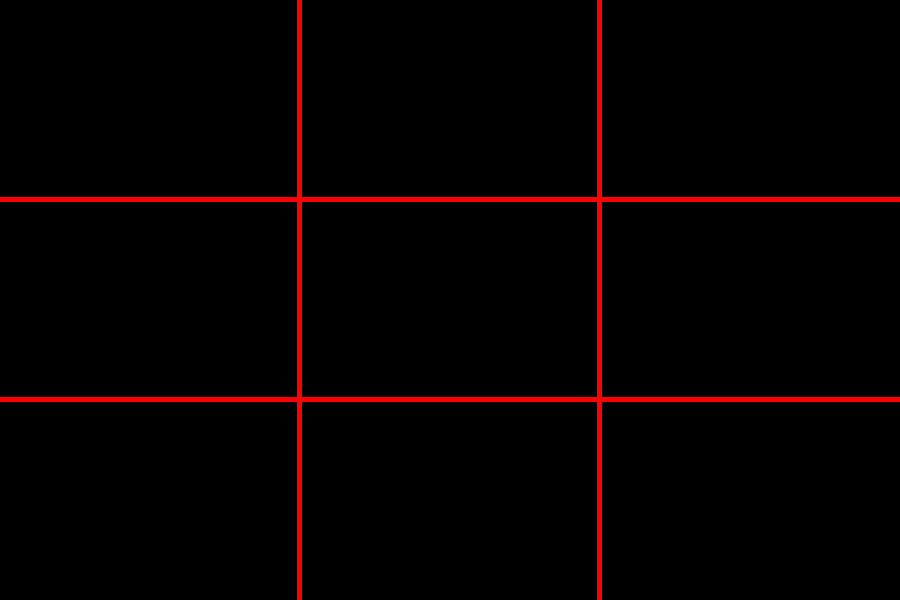 The grid is great for making sure your horizons are straight, for making sure there are subjects spaced out evenly throughout the frame and generally giving a bit of calm and order to the scene.

Here’s its superior, wiser and elusive brother – the Golden Ratio, also sometimes called the Fibonacci Spiral. It is the result of when you do some complex maths on a rectangle to the tune of: a/b = (a+b)/a = 1.61803398875. Theres no need to memorise this, you can find the overlays everywhere on internet image searches to download and paste over your images, as well as being built in (but very well hidden) to Lightroom. To access this spiral, press R to get your cropping function open, then cycle through the available overlays with O until you find the spiral. Turning it around is done by pressing Shift + O. There are eight variations to it. 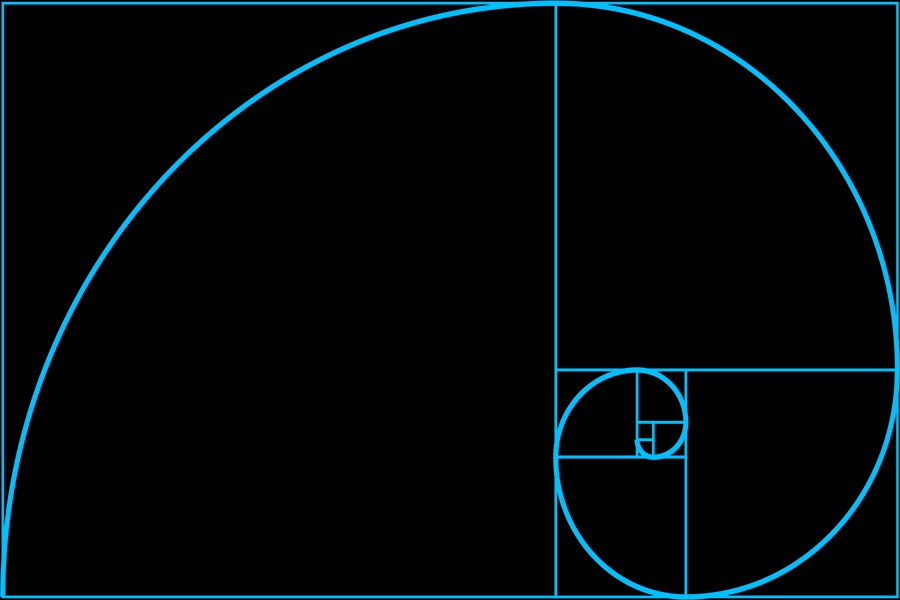 Looks kind of fun, a tight coil ending up off centre and providing a great host of lines to align your picture up to.

If I put the two overlays on top of each other, you can see how similarly they intersect. The tight spiral of the blue ratio almost marries up with the lower right intersection of the red overlay. There is a reason why the golden ratio gets oft pushed away, because it’s murder to have all its eight variations displayed on a screen at once. 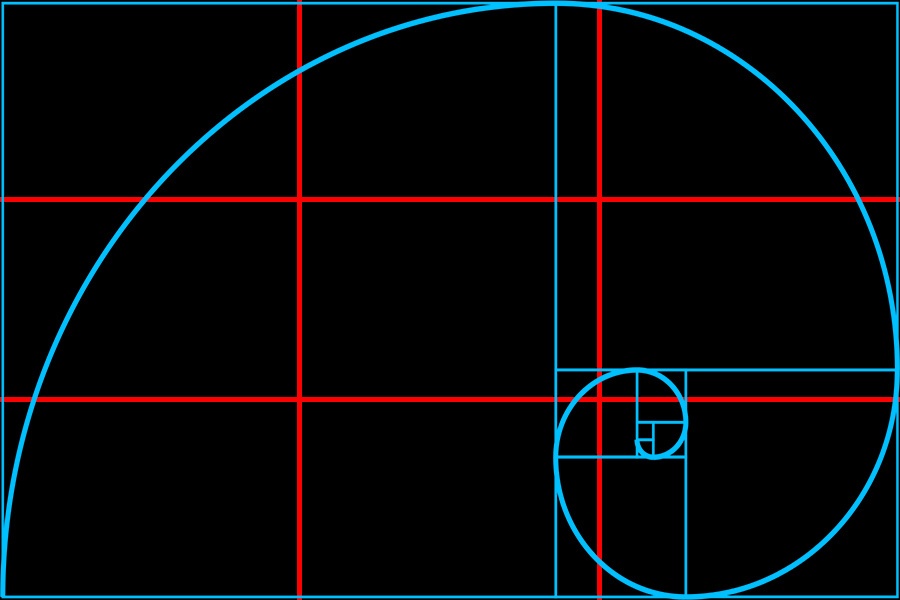 The lower right intersection of the red lines is pretty close to the tight curl of the spiral.

Here’s the reason they don’t put the spiral as an overlay on your camera – The spiral in just four of its eight possible orientations.

So if the golden ratio is more hassle than the ROT grid, why should I care about it? It all comes down to the long sweeping arc of the spiral. Putting your subjects along a curved line rather than straight grid lines draws the viewers eyes around the picture, forcing it to go closer to the tight coil of the spiral where you’ve placed your point of interest. It’s like a giant subliminal road sign pointing the eyes towards where you want them to go.

I hope I haven’t lost you yet – Here’s a few real world examples of the Golden Ratio in practice on a few of my images, one without an overlay and one with. Hopefully you can see how many times the images follow the sweeping curves and conclude with the focal point of the image in the tight coil. 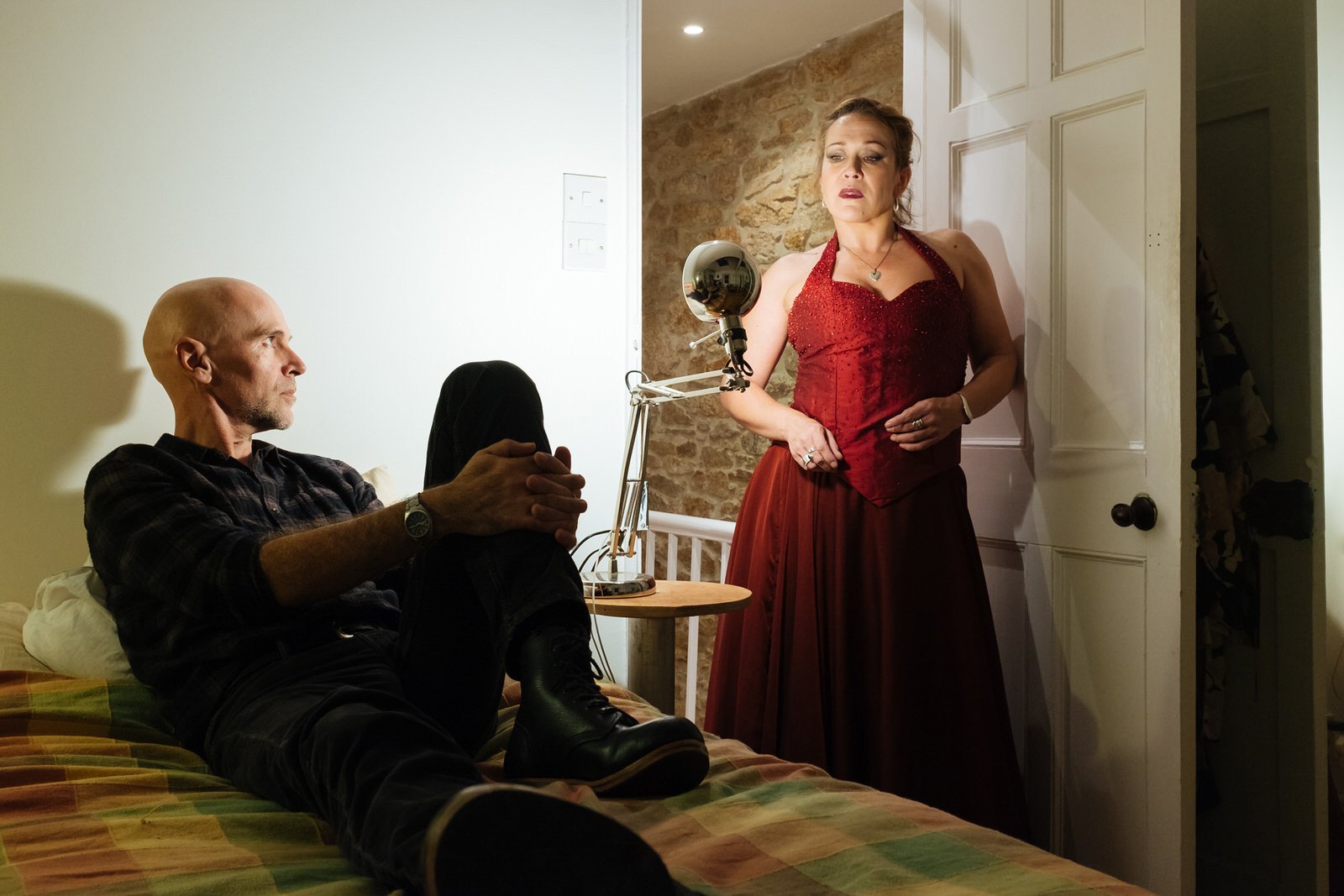 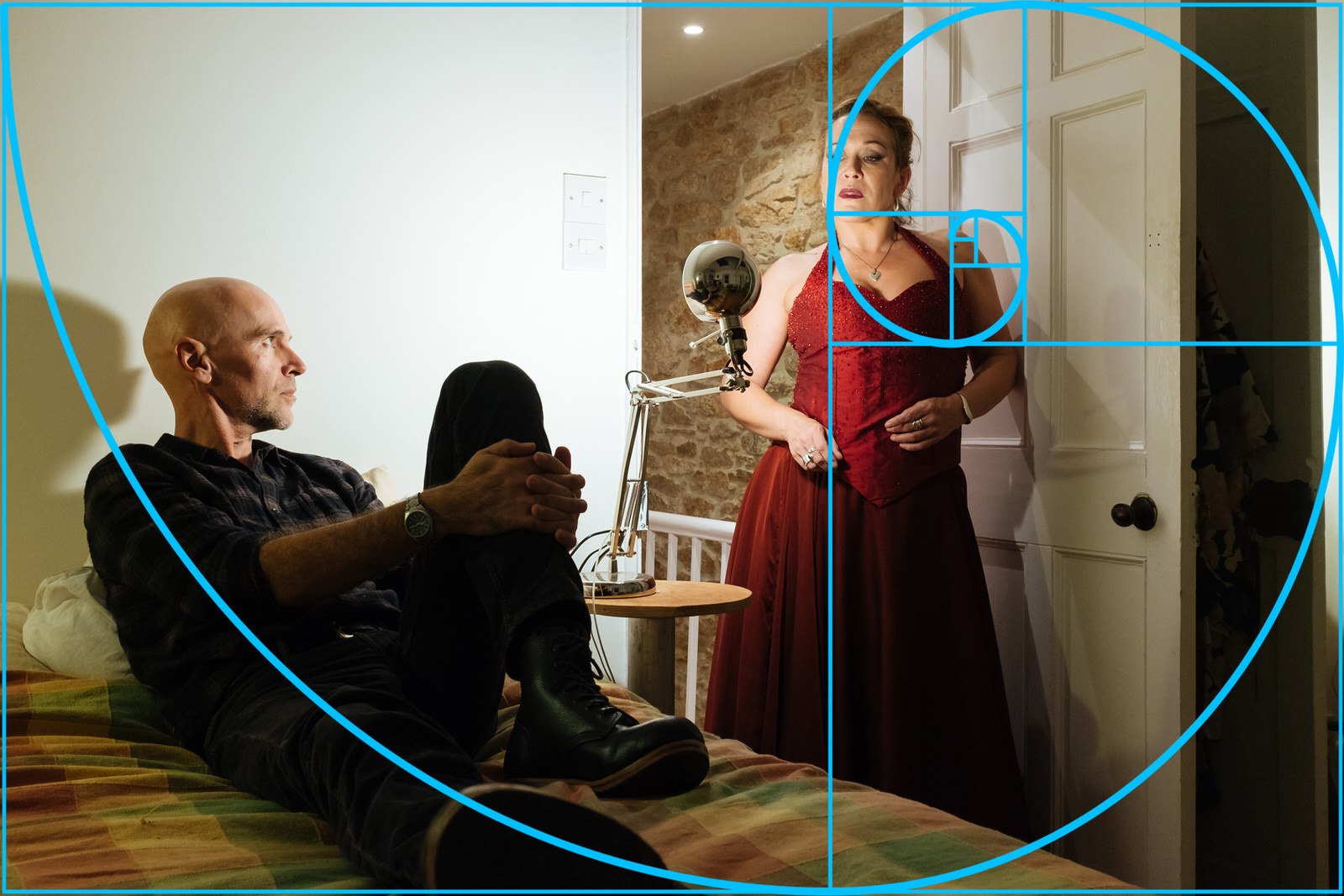 The line follows the body shape of the man on the bed and finishes at the woman’s stare. 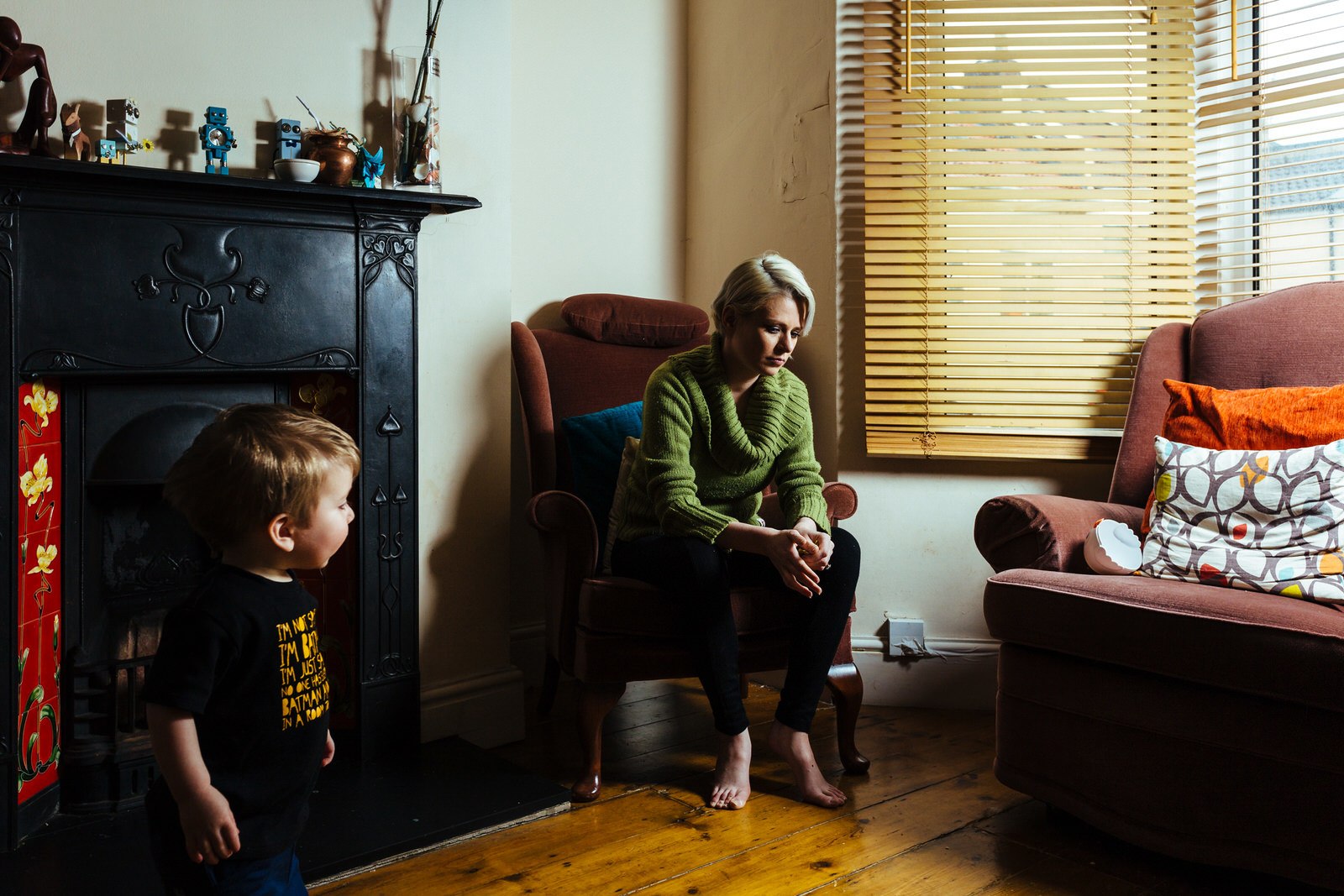 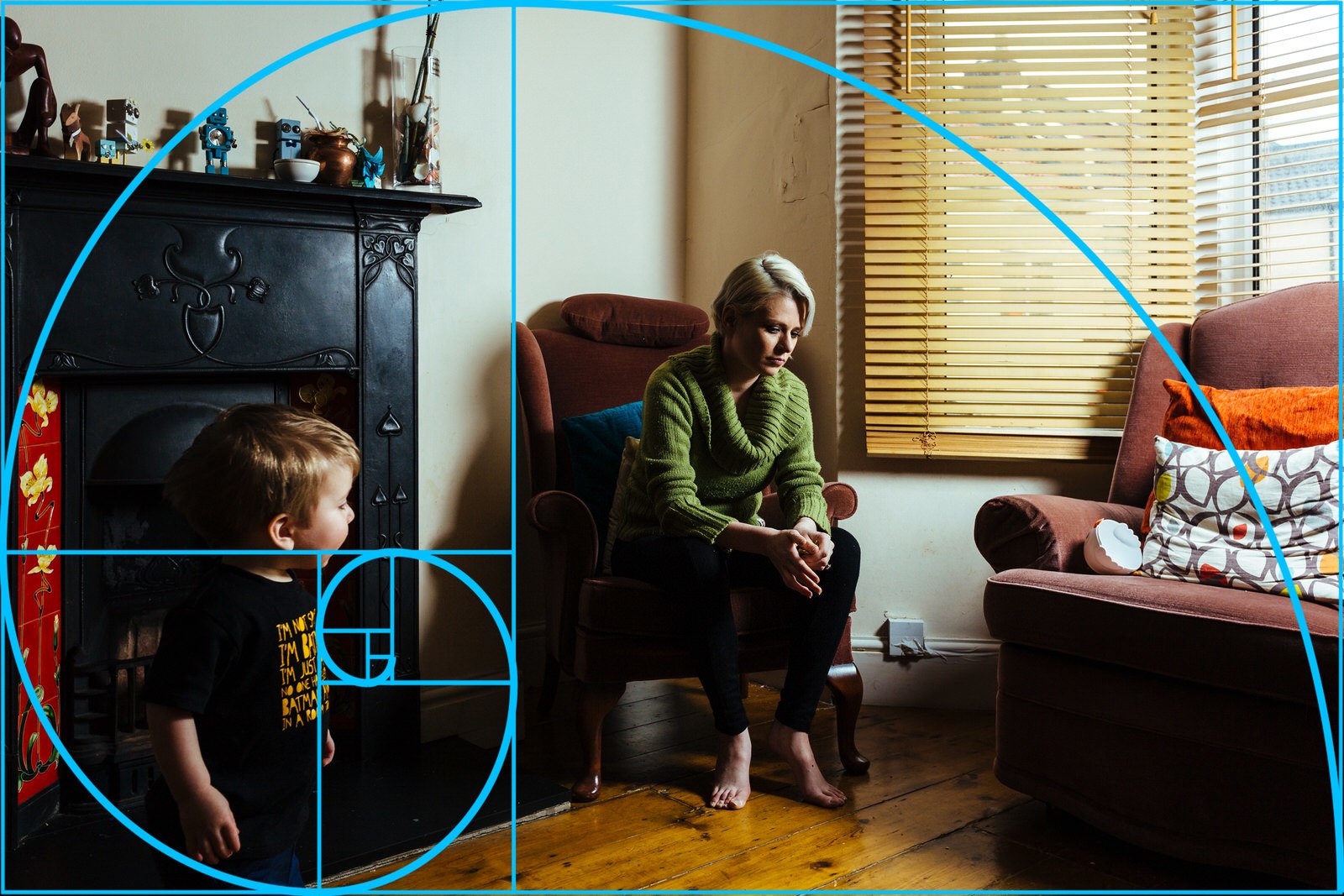 This image focuses on the child, dominating the image in the foreground, larger than the adult mother. 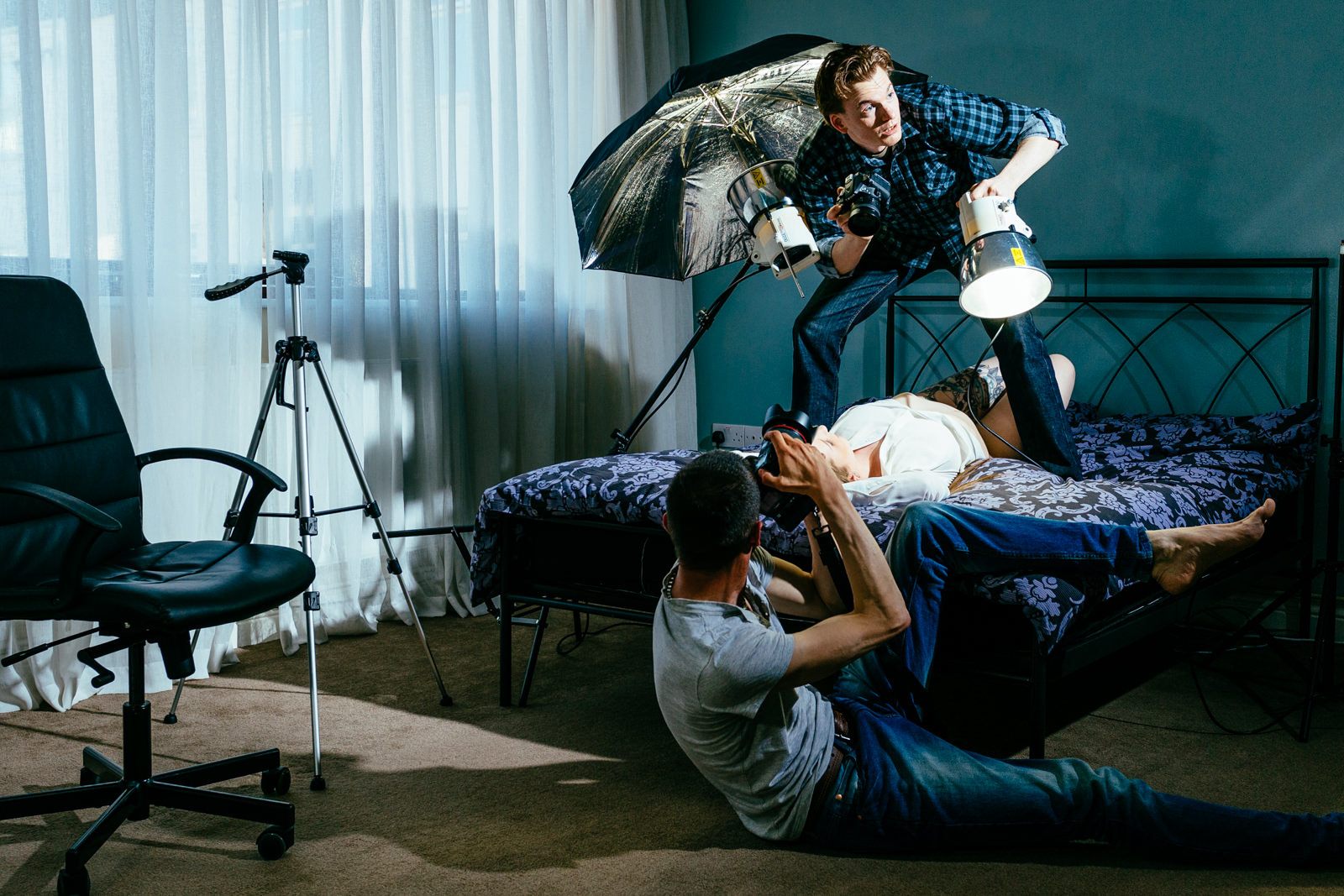 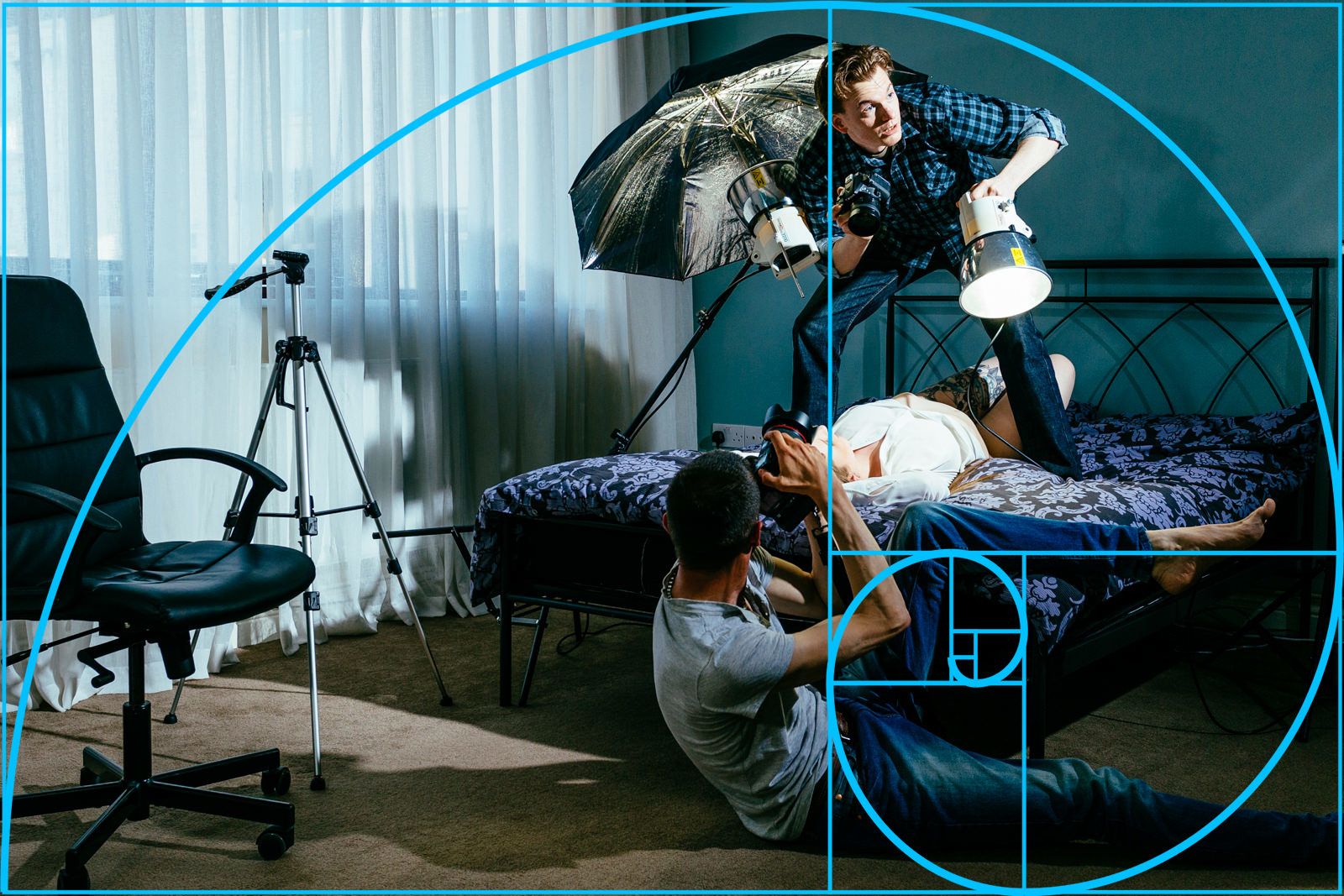 This time the spiral passes through background objects like the chair and tripod, around the lighting and on to the crook of the leg of the photographer on the floor. 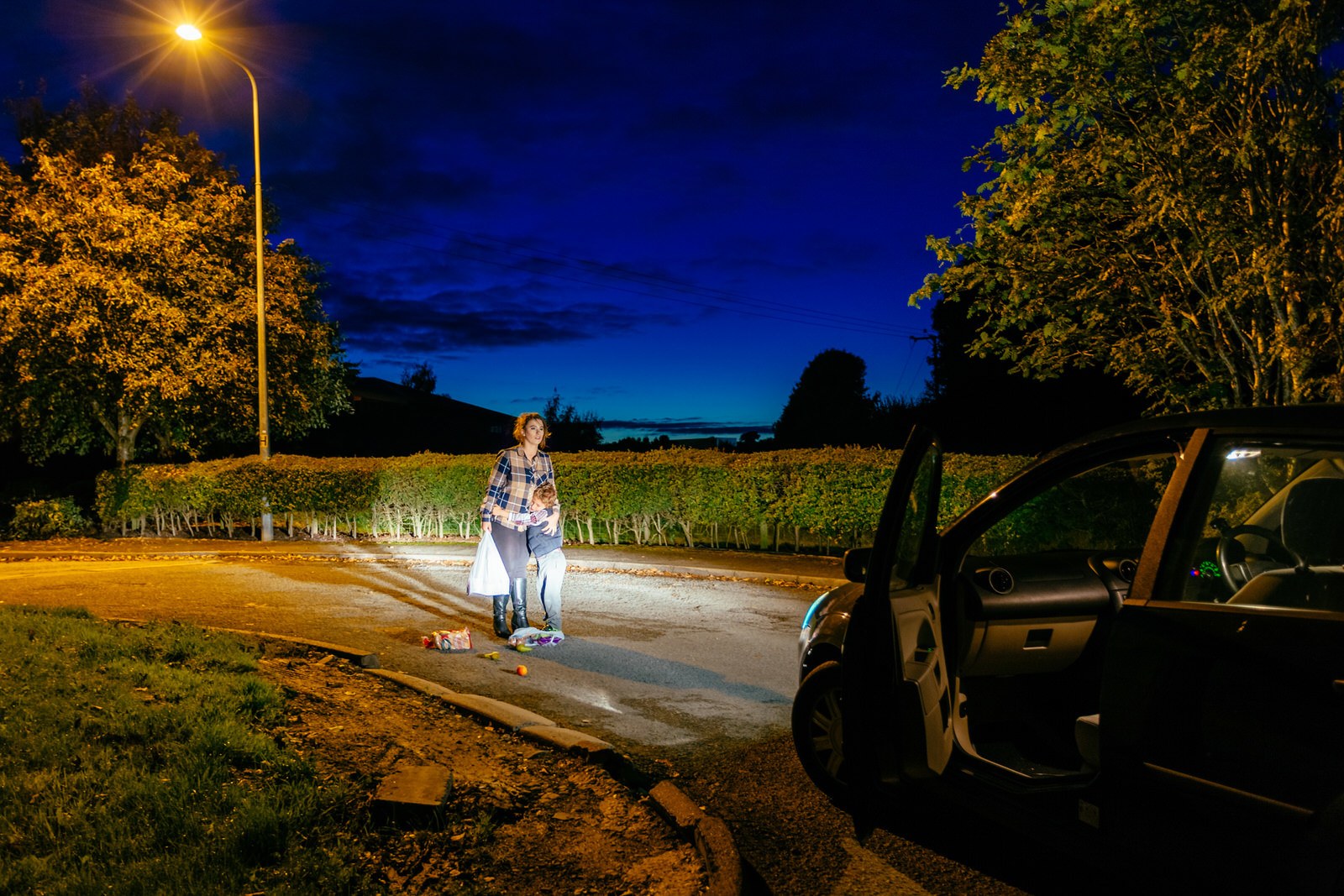 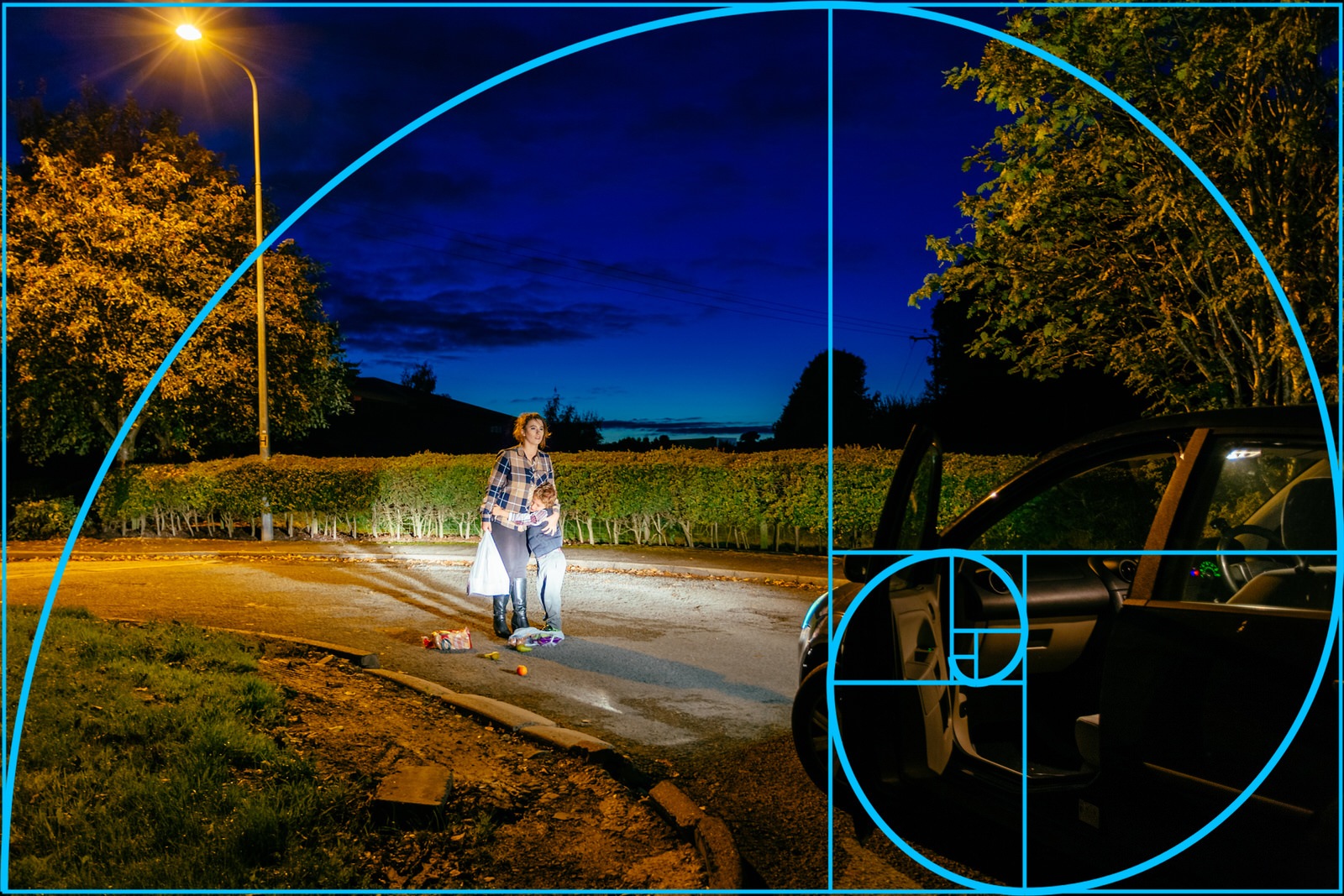 The focus is pulled towards the cars open door, making the viewer ask questions why

There’s a whole host of different ways you can use the Golden Ratio, from portraits, landscapes, even sports and street photography. Start looking out for the Golden Section when editing your pictures in your favourite cropping post-production programme and see how it can take your pictures from “yeah” to “oh yeah!”. I have to admit once I discovered my love for the Ratio, I started flicking back through the past few years of shoots to re-crop images in the Ratio. These newly cropped pictures feel more dynamic, interesting and forcibly lead the eye around the pictures.

As always, it’s entirely up to you to take my advice, but I just want to be able to show that there’s more to the world of art than a criss-cross of lines. Lets just call the Golden Ratio “The Rule Of Thirds, Plus Some More” (TROTPSM for short.)

Jon Sparkman is a Cheltenham, UK based fine art photographer. He discovered his love for using flash completely by accident and now centers his work around conveying a message through his photography. You can find his work at www.sparkman.photography and follow him @sparkman_uk on Instagram and Twitter. This article was also published here and shared with permission

Watch: El Risitas explains why Rule of Thirds sucks in a hilarious “subtitled” video
« Here’s how to burst that double gel bubble with Pre-Vis!
Flying a drone in Sweden? Remove your camera first or you’re breaking the law »