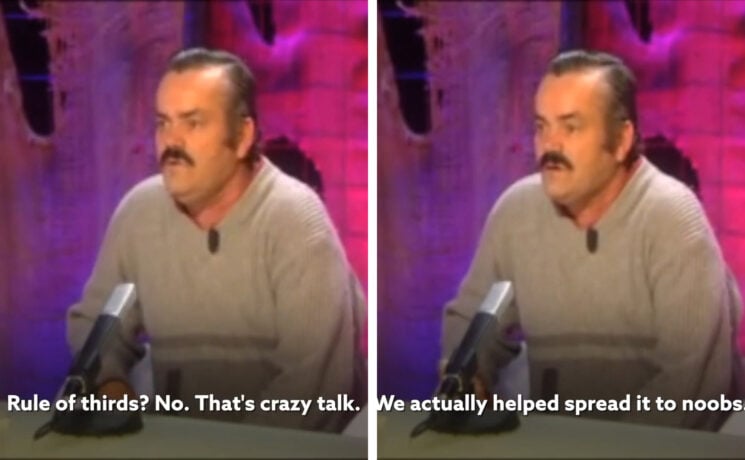 I’m sure you’ve seen El Risitas in one of many iterations of his 2007 interview, filled with his recognizable laughter. This video turned into a meme in 2015, and a bunch of “subtitled” videos popped up on YouTube. Well, here’s finally one for photographers and other artists. In this one, El Risitas is subtitled as Picasso telling a story about the Rule of Thirds and why it sucks.

The video was uploaded and subtitled by photographer Tavis Leaf Glover. In the video, El Risitas (or “Pablo Picasso”) talks about how masters invented the Rule of Thirds to mess with newbies. “Start them with horrible composition tool and they create horrible compositions for the rest of their lives,” says “Picasso.”

As you can imagine, Tavis himself isn’t a fan of the Rule of Thirds. In fact, he says that it’s a “horrible” tool and believes that there are tons of other composition techniques to master and use instead.

I personally wouldn’t discard the Rule of Thirds completely. I mean, it’s a good start and it’s a rule that’s easy for new photographers to understand. But I totally agree that using it is not set in stone, and I also think that there are plenty more techniques to master. As a matter of fact, I also think that you should also learn how to break all the rules, but also once you’ve learned them.

Anyway, El Risitas as Picasso talking about the most popular composition rule is still super-funny. And whether or not you like the Rule of Thirds, I’m sure that this video will give you some giggles.

« Public pressures Zuckerberg to give up on Instagram for kids
Mitakon has finally released the Speedmaster 35mm f/0.95 II for Micro Four Thirds »