Feeling a little overwhelmed with editing in Darktable? After using Lightroom exclusively for 13 years, I too found myself scratching my head when I first fired up darkroom. A lot of the editing tools are similar to Lightroom. Although, those tools have more built-in features vs. Lightroom. Plus, there’s a bunch of new tools that not even Lightroom has!

This is part three of five in a series. Check out Part 1 and Part 2. In today’s tutorial, I’d like to share some basic edits to help you get started with editing in Darktable. If you’re ready… let’s do it! Oh, and here is the before and after image that I’ll be demonstrating for you… 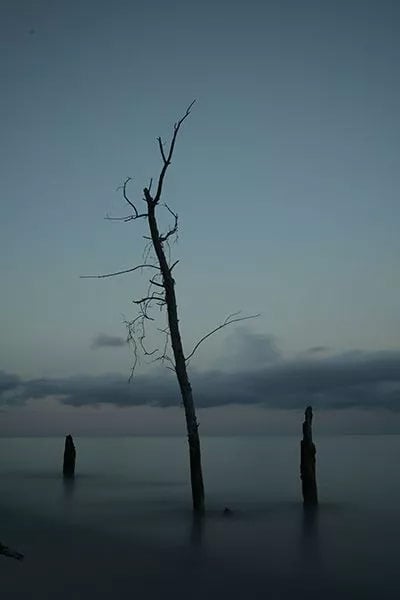 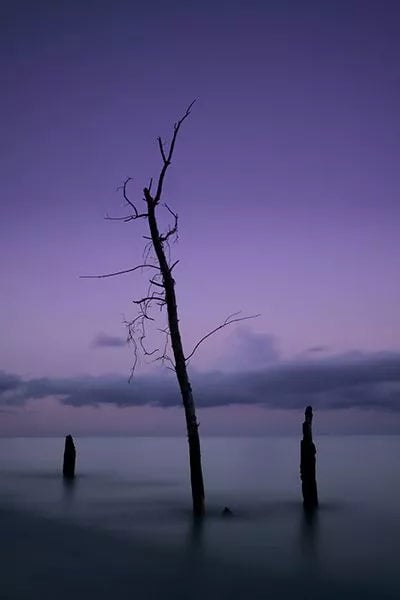 Where does editing begin?

Editing starts in-camera and not in darkroom! Make sure to choose the aperture and shutter speed to achieve your creative vision… in-camera. Don’t forget to set the White Balance and use the lowest ISO (to reduce noise) possible, too.

We can’t forget about composition either. Get that and everything as close to possible before taking the shot, and you’ll find yourself not having to “fix” your images in darktable.

In part 1 of this series, I explained how darkroom has a history panel and records everything you do while editing. The second image shows each of the 8 edits I applied to achieve my creative vision. Following, you’ll find each step described in detail.

The tonal range of the image was relatively low and was underexposed. Quite the accomplishment after a 30-second exposure! Another 15 seconds would have given me a better exposure in-camera… so, I had to fix it in the darkroom.

I increased the exposure setting by 1.5 stops and adjusted the black point. Although I didn’t close the white point gap completely, it was enough to expand the tonal range to my liking. 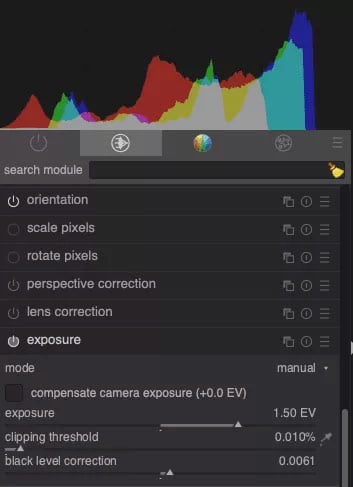 Although I tried to nail the White Balance (WB) in-camera, I failed once again. I used the WB setting to make the image a tad warmer. 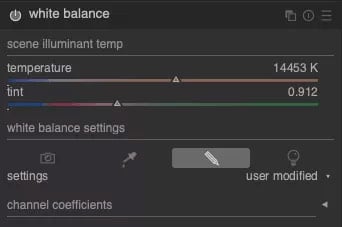 After expanding the tonal range, the image was still a bit flat. I used what is known as an “S” curve to add some contrast. This is done by bending the linear line to darken the shadows and brighten the highlights. This is an edit that sometimes can be overdone. Make sure to have your clipping tool activated when using. 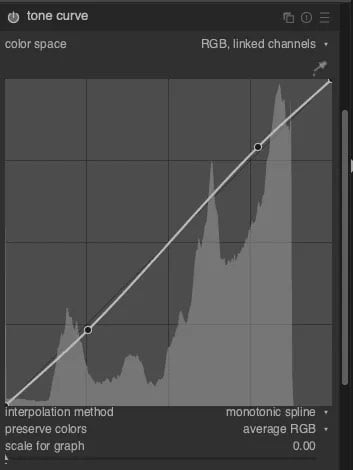 At ISO 400, I wouldn’t generally need to remove digital noise. However, a 30-second exposure added some additional noise, and it was quite noticeable, especially in the Shadows.

I used darkroom’s “raw denoise” to remove the dreaded noise. Even though it eliminated the noise, it was too intense at the default settings. In general, Denoise tools will smooth out your pixels and make elements in your image look like plastic. 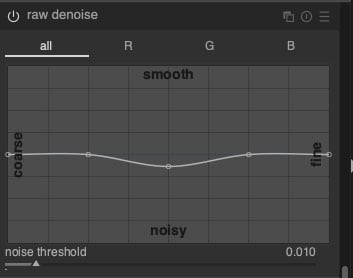 To remove the noise and retain texture required dropping the linear line down towards “noisy.” Yes, this added a little bit of noise back. However, it was much less than before and brought back some texture.

You can see a small tree branch sneaking in the bottom/left corner of the image. It’s not a deal-breaker since it can be easily removed with the “retouch” tool in the darkroom. If I had seen it at the time of capture, it would have been ideal to have eliminated it at that time. 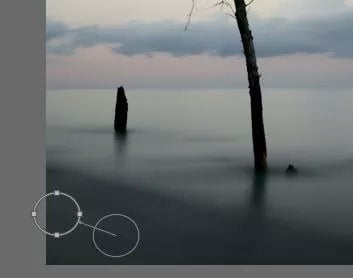 I used an oval shape for the retouch, and it seamlessly removed the branch by covering it up with water nearby.

At this point, the edit is what I would refer to as a custom edit. This includes basic edits for a classic look followed by custom edits, like the retouch.

The next part of the edit I like to refer to as a creative edit… an edit based on my creative vision. Often, a creative edit is one where it’s not what was seen at the time of capture. Some photographers call this a “style.” 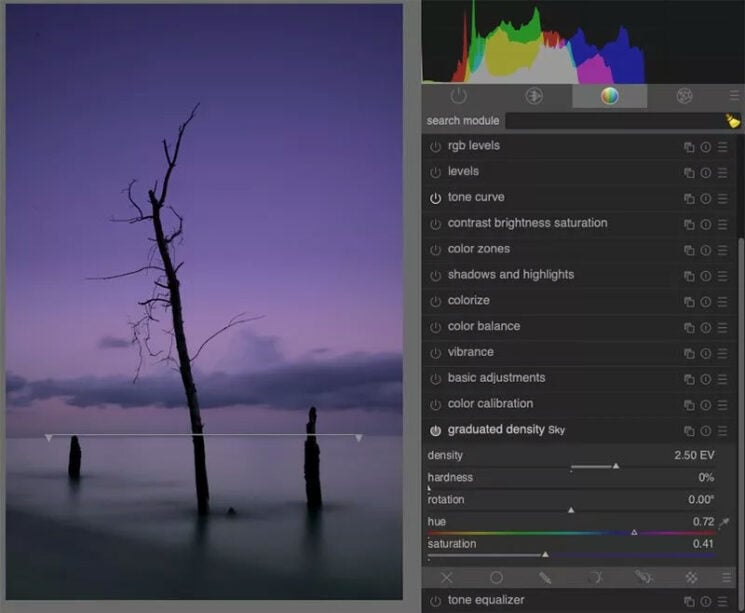 That being said, my style isn’t for everyone, to each their own. Anyway, I used the Graduated tool to darken both the sky and water. Plus, I used it to alter the colors! 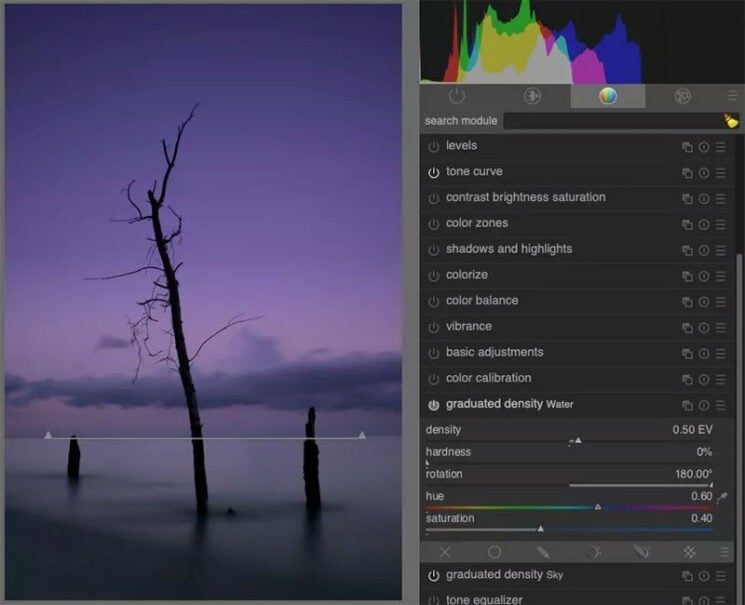 For the sky, I darkened it by 2.5 stops and adjusted the hue to add a blue-purple tinge. The water was darkened by a .5 stop. As for the color, I leaned more towards blue vs. purple to add some contrast.

A funny thing happened after the graduated filters were applied. Dust spots became more apparent than before! Queue the spot removal tool to the rescue. Although, the retouch tool could have done the same job! Your choice. 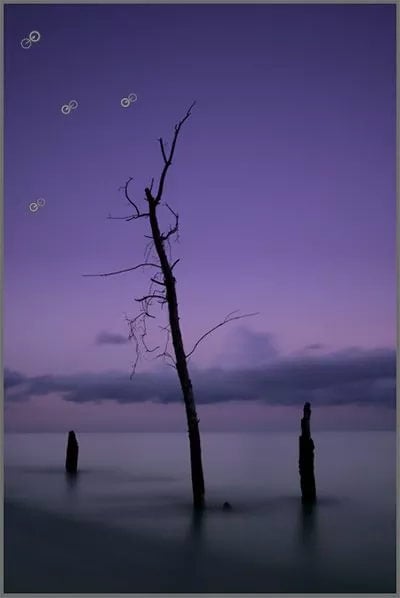 Another thing I noticed was the appearance of banding in the sky. This is most likely due to the decrease in exposure. Oddly, this didn’t occur with Lightroom or Adobe Camera Raw. To fix it, I applied the dithering tool and left it at the default settings.

This is the third of a 5-part tutorial. If you missed Part 1 and Part 2, be sure to check them out. In Part 4 of this series, you’ll discover everything you need to know to export your files out of the darkroom!

Chris Parker is a professional photographer, designer, and educator from the US. You can find more of his work on his website and follow him on Instagram, Facebook, and his YouTube channel. This article was also published here and shared with permission.

Free Lightroom alternative: Moving your images from Darktable to GIMP