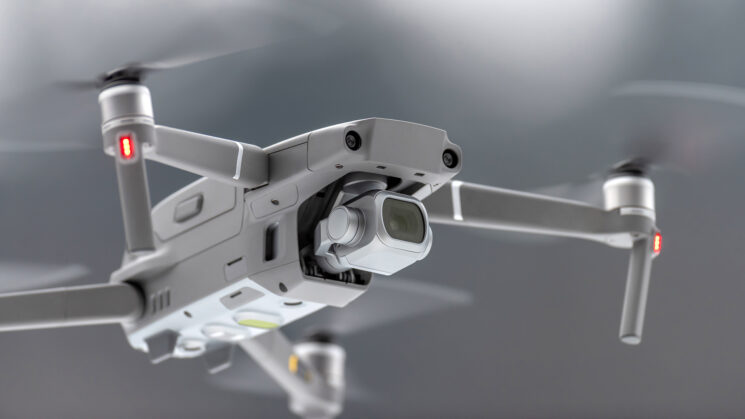 This has been a saga that’s been building up for a couple of weeks now, beginning with accusations from Ukraine (via Blynk co-founder Bolodymyr Shymanskyy) that Russia is exploiting DJI’s AeroScope system in order to track drones within Ukraine in order to identify potential targets while blocking Ukraine from doing the same (or even tracking drones within their own airspace).

DJI’s US spokesperson, Adam Lisberg denied the claims and DJI Support responded via Twitter, stating that there are “malfunctions” with the AeroScope system within Ukraine. Fast forward to the present day and Germany’s largest electronics retailer, MediaMarkt, has now pulled all DJI drones from its website and shelves in Germany and the Netherlands as a result of what Pandaily calls “Security Concerns”.

For those not familiar, AeroScope is DJI’s drone tracking system that allows authorities around the world to identify errant drones flying in places where they shouldn’t. It’s designed for use around government buildings, airports, special events, etc. where the airspace is restricted and highly controlled. We’ve covered it here on DIYP when it was launched in 2017, along with a demonstration of how it works.

AeroScope was initially launched as a “saviour of the skies” – so to speak. It was a way to for law enforcement around the world to get some control over the drones being flown illegally in areas or ways they shouldn’t. After all, that is a very real problem and has been for a while. But it looks like AeroScope might be DJI’s downfall if there isn’t more transparency over its implementation.

Exactly what’s been going on is part rumour, part hearsay and part official statements that may or may not be true, but here’s a rough timeline of what appears to have happened over the last couple of weeks. It should be made clear at this point that nothing has yet been proven either way.

Blynk co-founder Bolodymyr Shymanskyy posts a 7 part tweet stating that DJI has limited the capabilities of its AeroScope tech for the Ukrainian army, providing the Russian army with a “significant air reconnaissance edge to Russian invaders”. He does note that it may be a technical problem but feels that it is unlikely.

According to recent reports from Ukraine, the Chinese drone producer @DJIGlobal have limited the capabilities of its "Aeroscope" technology for Ukrainian army, giving a significant air reconnaissance edge to Russian invaders.
Read more: What is AEROSCOPE? (1/N)

DJI US Spokesperson, Adam Lisberg responds to the claims, stating that the reports are false and that DJI is aware of “problems with some AeroScopr units in Ukraine”.

I'm the head US spokesman for DJI, and let me say very clearly — these reports are FALSE. We are aware of problems with some AeroScope units in Ukraine; they may be connected to prolonged loss of power/internet. But there is NO deliberate action to downgrade AeroScope there.

The DJI Support Twitter account also responds to the claims stating that there are “AeroScope malfunctions” in Ukraine and that they’re working on resolving them.

DJI continues to provide full global technical support and services, including our AeroScope Remote ID solution. We are working with customers to resolve some AeroScope malfunctions in Ukraine that we suspect are related to interim loss of power and/or internet services.

Ukrainian Vice Prime Minister Mykhailo Fedorov sends a letter to DJI founder and CEO Frank Wang over his concerns about the use of DJI products in Ukraine by the Russian army and asking DJI to cease doing any business in Russia.

In 21 days of the war, russian troops has already killed 100 Ukrainian children. they are using DJI products in order to navigate their missile. @DJIGlobal are you sure you want to be a partner in these murders? Block your products that are helping russia to kill the Ukrainians! pic.twitter.com/4HJcTXFxoY

DJI responds to the Ukrainian VPM, stating that “all DJI products are designed for civilian use and cannot meet military specifications” and once again disputes the allegations made against it.

German electronics retailer MediaMarkt responds to a tweet asking them to stop selling DJI products. Their response is in three parts (1, 2, 3), stating that they’ve received information from a number of sources that the Russian army is “using products and data from the Chinese drone supplier DJI for military activities in Ukraine”.

Hello Dang, in the last few days, we have received more and more information from various sources that the Russian army is using products and data from the Chinese drone supplier DJI for military activities in Ukraine.

As a responsible company, we have taken immediate action and removed the manufacturer from our product range groupwide until further notice. We will closely examine further indications and developments.

With this step, we as a company send a clear signal for the values that have the highest priority for us and which we see being attacked in an unacceptable way by Russia’s aggressive war against Ukraine.

DJI responds once again disputing the allegations made against it and reiterating the previous statement from 16 March. They also dispute MediaMarkt’s own claim over why MediaMarkt removed DJI’s products from its online store and retail outlets.

AeroScope isn’t working properly in Ukraine and apparently hasn’t been for at least a couple of weeks now. There don’t appear to have been any reports of malfunctions for Russian AeroScope devices. DJI’s accusers say that DJI has the ability to turn off the AeroScope tracking for drones within Ukraine and DJI says they don’t – which seems patently untrue, as DJI could push a firmware update any time they liked to disable that feature, which Ukrainians would then be free to install at their convenience making their drones untrackable – to anybody.

DJI also states that they cannot obtain user information from the flight data and that no identifiable data about the drone or its users is sent to DJI, yet multiple reports over the last several years highlight data leaks from DJI drones and the DJI app that reportedly have been monitored sending large amounts of data back to Chinese services.

They have repeatedly said that their drones “cannot meet military specifications” but I’m kind of curious what those “specifications” are, exactly. I mean, if they’re saying that their drones don’t conform to the technical “mil-spec” requirements for electronic equipment manufacturers, then that’s perhaps true, although that doesn’t stop their products from being used and abused in a military capacity.

A number of DJI drones (as well as other brands), for example, have been shown in photographs retrofitted with grenades and other explosives for terrorist uses over the years. DJI saying that their drones “cannot meet military specifications” is a bit like Wilson Sporting Goods saying that a Louisville Slugger “cannot meet assault and battery specifications”. Sure, a baseball bat isn’t made to beat the crap out of people, but they’re definitely capable of it depending on who’s holding it and what their intent is.

In recent years, DJI has faced a number of challenges and security concerns with the US Army banning DJI drone usage over what it called “cyber vulnerabilities” – although the timing around the initial release of AeroScope is convenient – and not too long after, DJI was accused of spying on the USA for the Chinese government. In December of 2020, DJI was added to the United States economic blacklist.

At the time, the US Government’s Commerce Department stated that DJI had “facilitated the export of items by China that aid repressive regimes around the world, contrary to U.S. foreign policy interests”. It meant that US companies couldn’t sell to DJI, but DJI products could still be sold in the USA. In October of last year, FCC Commissioner Brendan Carr suggested banning DJI products in the USA entirely over “National Security” risks. and in December of last year, the US government added DJI to an investment exclusion list – although this seem to be a largely symbolic gesture as DJI is not a publicly-traded company.

Now, don’t get me wrong. I’m not saying DJI is necessarily doing anything other than protecting their own business interests – after all, they have bills and lots of wages to pay – but things don’t seem to be looking good for the company right now. AeroScope was seen as a supposedly positive force full of hope when it was first released. Take the bad guys out of the sky so that the rest of us can get on with it in peace!

But now, it simply seems to be a method of control, if the allegations turn out to be true. Even if they don’t turn out to be true, the potential is definitely there for it to be used for nefarious purposes even if, as DJI claims, they “cannot meet” the specifications.

As of March 2021, DJI held 76% of the global drone market share based on sales volume, followed by Intel. Well, I say “followed”, DJI’s well ahead. The second-place Intel has only a 4.1% market share. I would be curious to see how DJI’s market share holds up going forward. I’ve seen a number of people on my social media feed over the last couple of weeks trying to offload their DJI drones in favour of switching to another brand. Have you gotten rid of yours or are you sticking with DJI?

This LEGO Leica IIIf set could come to the store shelves, and you can help

« Oscar Barnack’s personal 0-Series 1923 Leica could break the auction record with $3.3 million
Quick tip: How to record your camera monitor or EVF for $0 »