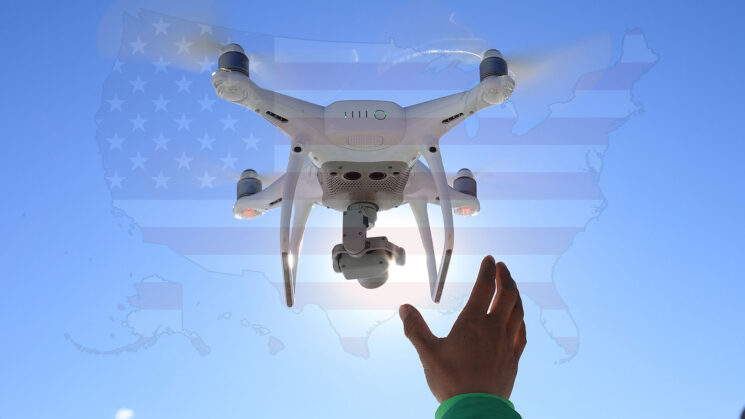 After DJI’s high yesterday with their Ronin 4D announcement, they’re being brought back down to earth by the FCC after Commissioner Brendan Carr has called for its addition to the FCC Covered List, which would ban the company from selling its products in the USA.

A letter published on the FCC website states that DJI accounts for more than 50% of the US drone market and collects “vast troves of sensitive data”. The Chinese government’s power to compel DJI to assist in espionage activities, it says, is a national security risk.

“DJI drones and the surveillance technology on board these systems are collecting vast amounts of sensitive data—everything from high-resolution images of critical infrastructure to facial recognition technology and remote sensors that can measure an individual’s body temperature and heart rate,” Commissioner Carr stated. “Security researchers have also found that DJI’s software applications collect large quantities of personal information from the operator’s smartphone that could be exploited by Beijing. Indeed, one former Pentagon official stated that ‘we know that a lot of the information is sent back to China from’ DJI drones.

“DJI’s collection of vast troves of sensitive data is especially troubling given that China’s National Intelligence Law grants the Chinese government the power to compel DJI to assist it in espionage activities. In fact, the Commerce Department placed DJI on its Entity List last year, citing DJI’s role in Communist China’s surveillance and abuse of Uyghurs in Xinjiang. Add to this information the widespread use of DJI drones by various state and local public safety and law enforcement agencies as well as news reports that the U.S. Secret Service and FBI recently bought DJI drones, and the need for quick action on the potential national security threat is clear.

The document states that a former Pentagon official knows that DJI drones send a lot of information back to China, and DJI has fallen foul of security issues with the US government before over alleged vulnerabilities. DJI was even added to the US Economic Blacklist at the end of last year – the same list that stopped companies like Huawei from collaborating with Google – although it doesn’t seem to have done DJI much harm.

The document even cites the Huawei situation, labelling DJI as “an airborne version of Huawei”.

[T]he evidence against DJI has been mounting for years, and various components of the U.S. government have taken a range of independent actions—including grounding fleets of DJI drones based on security concerns. Yet a consistent and comprehensive approach to addressing DJI’s potential threats is not in place. That is why the FCC should take the necessary steps to consider adding DJI to our Covered List. We do not need an airborne version of Huawei.

If DJI were to be added to the FCC Covered List, that would essentially kill DJI’s business in the USA. No more government contracts and the FCC would reject every product they attempted to introduce to the USA. They wouldn’t be able to sell products there at all. And it wouldn’t just be drones. That means all their gimbals and other products would disappear, too, including the Ronin 4D announced yesterday.

You can read the complete document on the FCC website.