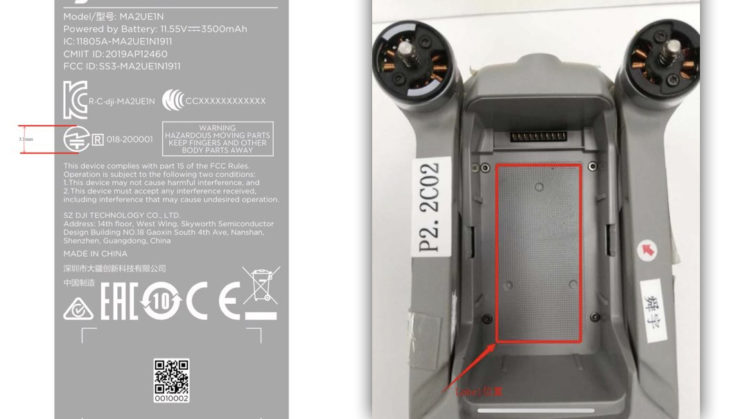 A couple of new images have leaked of the upcoming DJI Mavic Air 2, along with screenshots of an FCC certification showing a little more information about what we might be able to expect. The images come courtesy of serial DJI-leaker OsitaLV via Twitter. They show a top-side view of what is believed to be the Mavic Air 2 along with the FCC label of the battery.

According to the label, the battery appears to be significantly increased over the original DJI Mavic Air, raising that capacity from 2,375mAh at 11.5v (27.43Wh) to a rather huge 3,500mAh at 11.5v (40.25Wh). The other image shows most of the top of the drone, and OsitaLV states that there are no top obstacle avoidance sensors on the unit.

A 46% increase in battery capacity could potentially see that 21-minute flight time extended to a full half-hour, assuming the Mavic Air 2 pulls about the same current as the original Mavic Air. It is, of course, entirely possible that newer electronics or motors demand a little more power, requiring a larger battery. But I doubt new electronics would pull 46% more power, so I think an increase in flight time is going to be a given.

OsitaLV has confirmed that this is indeed the Mavic Air 2, thanks to the FCC filing which matches up the “Mavic Air 2” designation with the model number MA2UE1N, printed on the battery label shown above.

OsitaLV also posted confirmation of the new design of the remote controller that was leaked last month, along with its FCC sticker.

With the FCC filing now public, we hopefully won’t have to wait too much longer for an official announcement and the complete and final specs. The original Mavic Air was released in January 2018, so it’s due for a refresh. An announcement from DJI is expected at some point this month.