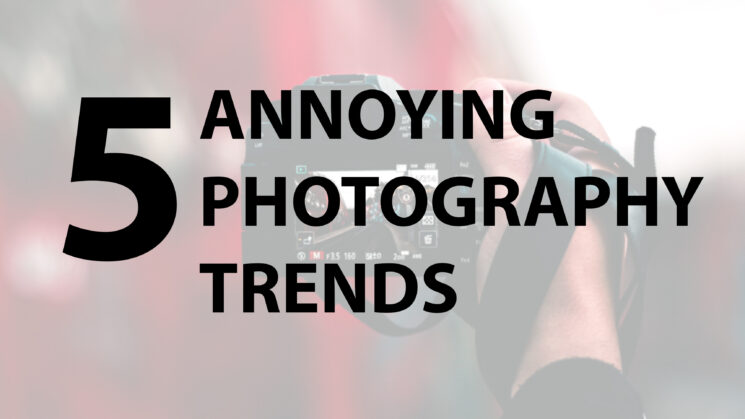 Every era has its trends in art, and photography in 2020s is no exception. Some trends may be here to stay, some are just a fad that will go away – and some of them you might find utterly annoying.

In this video, Adam Karnacz of First Man Photography lists five current photography trends that he thinks need to go away. Let’s see if you agree with his choice and if you’d like to see them go away as well.

Technological development is fast, and it seems like very brand announces a new flagship camera every few months. This puts a pressure on photographers that they need to upgrade more often than they actually do. In fact, even a 10-year old camera will do a great job in 2022 if you know what you’re doing.

One thing I noticed, just like Adam, is that the photography conversation often revolves around gear and its specs. And we both agree that it’s kind of boring. I personally find it very, unfulfilling, unproductive, and even tiring. Adam hopes that this is a trend that’s coming to its end, and that the gear talk and insanely common upgrades will switch towards more attention on the art of photography.

Social media is filled with aggressive people and trolls, we’ve all had experience with them so far. But that’s just one of the bad sides of social media. The one Adam focuses on more in this video are algorithms. They’re not created to help you but feed you the most clickable, attractive videos and photos. Ever since TikTok appeared, it seems to me that all social media have become more focused on short, entertaining (and often stupid) videos. Because of this, Adam notices that content is no longer a king: it’s the catchy, clickbaity titles and potentially viral videos that can bring more ad-generated revenue.

NFTs seem to be all the rage at the moment. Over the past year or two, lots of photographers and other visual artists have started using it to sell their work. Some of them earned thousands, hundreds of thousands, or even millions of dollars selling NFTs, which is probably what drew others to jump on the bandwagon.

While there are some good sides to selling NFTs as a photographer, Adam notes that there are some bad ones as well. In a recent Twitter thread, he wrote about the issues pretty extensively after researching NFTs for a year. Ultimately, he decided not to sell his own because the whole idea looks a bit too much like a Ponzi scheme.

Other than NFTs, AI has also taken the photography world by storm. Every photo editing software now has AI-driven features, and so do many phone cameras. And it’s inevitable that this trend will continue. When it does – will AI be able to take better photos than us? Adam argues that it’s already better at editing than a human is, but I tend to disagree, I think it’s still pretty far. Per Adam, the development of AI technology could potentially lead to loss of jobs in the photography industry. Although, as long as artificial intelligence mixes up dunes for nudes, I think we’re safe.

Even if AI does eventually become a better photographer than human photographers – it will never be able to make a story better than we do. So, once again, I think good photographers-storytellers are still safe.

Being difficult is essential as a photographer, but it’s more difficult than it sounds. And it’s not only because photography has become so easily available to everyone. As Adam notes, authenticity requires us to have a certain level of self-awareness and self-understanding of our own intentions. I personally think that these are keys to being authentic, but Adam put it in words perfectly.

Adam gives some examples of being inauthentic: asking insincere questions to boost interaction, lying (about anything), representing opinion as facts, and acting like a gatekeeper. What I’d add here is blindly following trends, which makes a bunch of Instagram accounts look as if they were made by the same person.

I don’t know which of these trends are here to stay, and which are a fad that will soon go away. Only time will tell. But if you’re annoyed by these or any other trends, Adam suggests some solutions. Make sure to surround yourself with great people in real life, but I’d add – on social media too. Always seek out truth, practice critical thinking, stay curious, and keep an open mind to those you disagree with. And last but not least, pick up your camera, go out and make some photos.

Five toxic photography opinions that need to go away