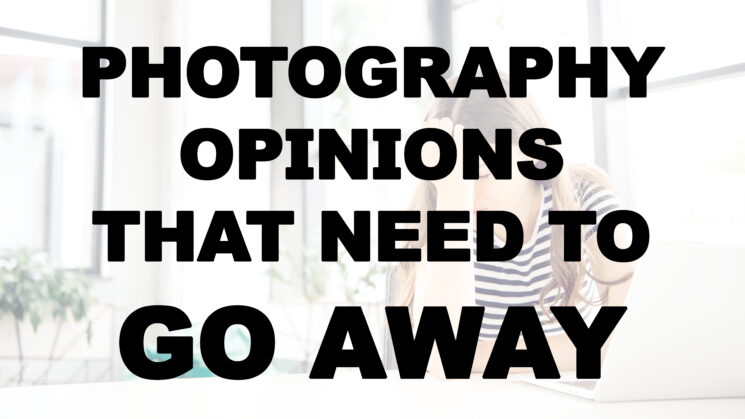 While doing photography as a hobby or a job, you have probably encountered many comments and opinions that made you feel bad. Perhaps you’ve even expressed some of them without realizing how toxic they are. In this video, Miguel Quiles warns you about five harmful and toxic photography opinions that no one likes to hear… And no one should tell others.

1. “You can’t take a bad photo of a beautiful person”

Well, first of all –  yes you can. You might be uncomfortable or unfamiliar with your gear. Or maybe you’re socially awkward and not really used to taking portraits. Or you’re a newbie and you simply lack skill to take a good portrait. We have all been there at some point.

When this comment comes from a photographer, it’s undermining your skill. It’s often made to take away your credit as a photographer and get all of the props to the subject – and that’s why no one likes to hear it.

2. “My photos are better than yours”

You can often see this in photography groups when someone comments on an image saying what they’d do differently. It’s not bad per se, depending on the intention of the comment.  However, people often use these types of comments to say not only that their photos are better, but also that their opinion is more valid than someone else’s.

As Miguel says, your ego is your enemy. Keep in mind that your opinion is not more valid than someone else’s: we’re all different, and so is our work.

I’ve often heard this, and Miguel notes that it often comes from new photographers. The reasoning behind this statement could be the argument that you should aim and get everything right in-camera, which isn’t entirely wrong. However, sometimes the camera can’t capture the scene the way we see it with our eyes. Also, if you shoot RAW, post-processing your photos is an absolute necessity if you want to breathe life into them.

Let’s also not forget that editing is a skill on its own, and it can make or break a photo. And finally, it’s up to every individual to choose how they want to treat their images, it’s not up to you to anyone what’s wrong and what’s right.

No matter which side of this spectrum you’re on, just ask yourself – does this really matter? It’s a great topic to start a conversation, but your opinion isn’t going to change anybody else’s, so just leave them be.

This is another common opinion that I’ve heard so many times! Some folks say that natural light photographers shoot that way because they don’t know how to use artificial lighting. Even if it’s true, this doesn’t mean that they can’t produce a good photo. It’s a style they love and embrace and that works for them.

Also, some natural light photographers can use flash and studio gear – but just can’t afford it, or they’re hobbyists so they don’t need it. All in all – if natural light works for them, there’s no place for judgement.

The bottom line is: be kind to other photographers (and to other people in general). And if you don’t have anything nice to say – don’t say anything at all.

Is social conformity and opinions of your peers impacting on your creativity as a photographer?

Why is the photography community so toxic?

« It is possible to photograph in the rain, here’s how
This new technology makes f/1.4 lenses at almost zero cost »