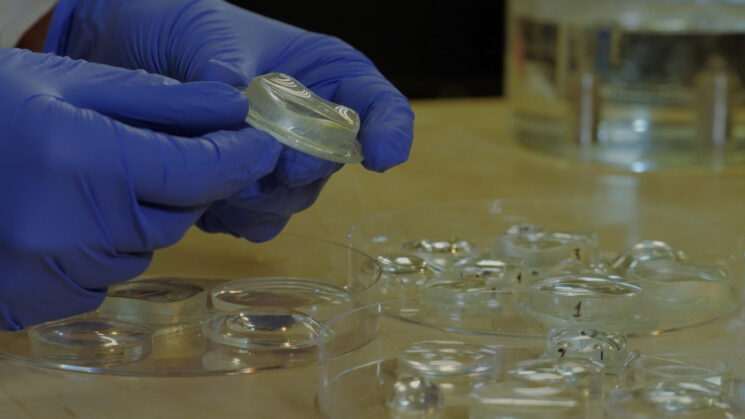 Researchers at Technion Israel Institute of Technology have developed a new way of making lenses with a curable liquid polymer that allows for faster prototyping of new and custom optics. It’s designed primarily for applications such as corrective lenses, augmented and virtual reality, medical imaging and astronomy, but could potentially become a new manufacturing method (or at least allow faster development) of photographic lenses.

According to a press release, the researchers began to develop the new method after realising that there were around 2.5 billion people around the planet who don’t have access to corrective eyewear. Their goal was to create “a simple method for fabricating high-quality optical components that does not rely on mechanical processing or complex and expensive infrastructure”.

The new technology uses liquid polymers to fashion the lens, which is then cured into the hardened solid optical element by being blasted with ultraviolet light in a very similar way to how resin 3D printers work to cure liquid resin into solid items. But with this method, you don’t have to deal with any kind of layer lines or aliasing from low pixel resolutions, resulting in smooth clean surfaces.

With the new method, the biggest challenge was gravity. After all, when you pour out a liquid, it tends to not hold its shape and flatten out into a puddle. To overcome this, the researchers found a way to cure the liquid polymer while submerged inside another liquid, equalising the pressure without mixing, counteracting gravity and letting the lens keep its shape.

Since creating simple spherical lenses, researchers have expanded into optics with odd geometries, including toroid and trefoil shapes. They’ve also tested the method with lenses up to 200mm in diameter achieving surface qualities that they say rival those of the best glass optics polishing techniques while “being orders of magnitude quicker and simpler to make”.

The researchers are now working on a way to automate the fabrication process to allow various optical topographies to be made in a more precise and repeatable way. They are also experimenting with different polymers to find out which produce the best optical components.

It’s a very interesting optical tech and I’d be very keen to see if this becomes a more widespread method of manufacture and prototyping for the big camera and lens companies in the coming years. It sure would be quicker for them to test optical designs using something like this vs the current traditional methods of grinding glass pucks. Of course, they’d have to find or develop a polymer that offers the same index of refraction as their optical glass in order to be able to test optical designs for mass lens production properly.

Relics of Technology Makes Me Miss My Childhood