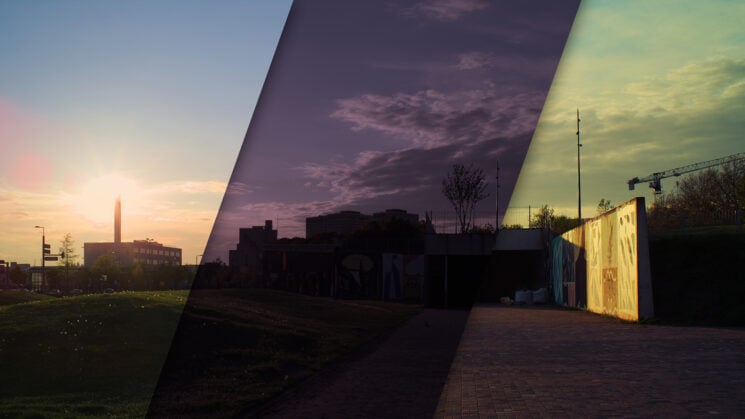 You can achieve Foveon-like images with deep colors and crisp individual pixels with your conventional (Bayer) camera. However, this comes at the price of losing 75% of your megapixels and having to work experimentally and outside the comfort zone of your camera manufacturer’s color science.

The colors we see in the final 24 megapixel image were algorithmically guessed from this monochrome pixel grid. Foveon and 3-chip cameras, on the other hand, record true colors per pixel because their sensors can see red, blue and green simultaneously. Since no algorithmic reconstruction is required for the recorded pixels, both their color reproduction and per-pixel sharpness are unique.

But we can achieve a working equivalent of true color pixel capture for conventional Bayer sensor cameras – if we are willing to sacrifice megapixels in the final image. The idea is strikingly simple: If we don’t treat the four monochrome red + green + green + blue pixels of a Bayer sensor as four individual pixels, but mix them down into a single pixel, then that pixel will have true color, not the reconstructed color of conventional debayering and its algorithmic guesswork. Maybe no one has seriously considered this alternative approach yet because photographers wouldn’t have sacrificed their megapixels in the past. Nowadays, where 24-48 megapixels cameras are the norm, this alternative method comes with fewer drawbacks. 6-12 megapixel images can still be very usable.

This alternative process can be done quite easily with the Open Source software programs RawTherapee and Gimp or Darktable. Of course, it not only bypasses conventional raw debayering, but also camera manufacturer’s color science. Instead, we now create our own completely DIY raw processing and color science. (Note that this process only works for Bayer sensor cameras, not Fujifilm X-Trans cameras whose red/green/blue sensor filter pattern is larger than 4×4 pixels).

Workflow with RawTherapee and Gimp 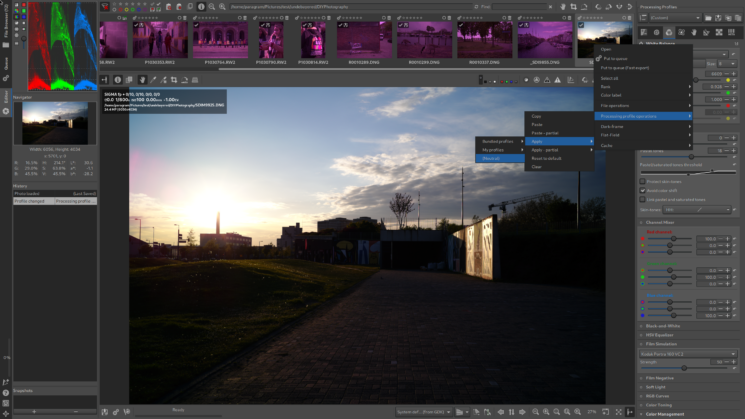 Launch RawTherapee. Use the “File Browser” (top tab in the upper left corner of the screen) and go to the folder with the raw image you want to process. Double-click the thumbnail of the image on the right to open it in the editor. Right-click on the thumbnail in the scroll bar at the top of the screen and select “Processing Profile Operations -> Apply -> (Neutral)”. This will turn off all image processing except debayering and camera white balance. 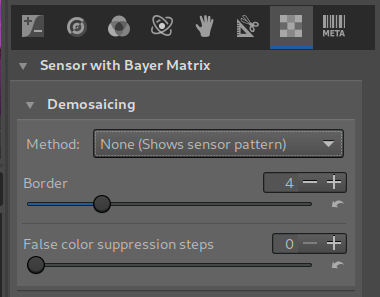 Next, we turn off debayering: On the right side, we click on the “Raw” tab (second last icon, showing a square pixel pattern) and under “Demosaicing” select as “Method” the very last entry in the pop-up list: “None (Shows sensor pattern)”.

Now the image is displayed in its raw sensor pattern. If we zoom all the way into the image with the “+” key, we can see it on the computer monitor: 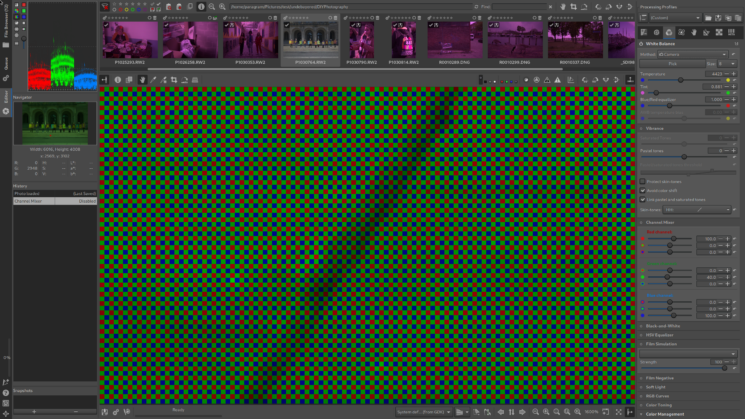 We switch to the Color tab (third icon in the right window, keyboard shortcut “Alt-c”) and turn on the “Channel Mixer”. In the “Green Channel” we decrease the value of the middle slider (the one with the green icon on the left) from 100.0 to 40.0. Our image is now ready to be exported. 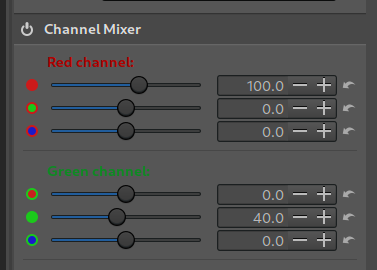 By the way, you can save all these settings as a custom profile (e.g. “Undebayered RGB”) and use it instead of the “(Neutral)” profile in the future to save yourself manual work.

On the left pane, we go to the “Queue” tab and configure it as follows: 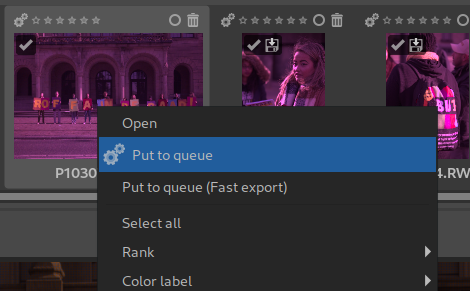 Exporting the image in RawTherapee

On the left pane we return to the editor (last icon, Ctrl-F4), right-click on the thumbnail of the image at the top and select “Put to queue”. Now the image will be exported as a TIFF file with maximum color depth.

We launch Gimp and open the exported TIFF: 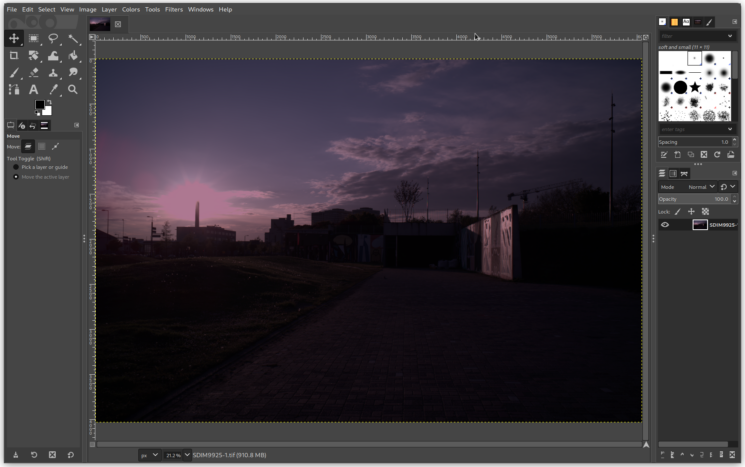 If we zoom all the way in, we see the red-green-green-blue sensor pattern again. Now we go to the menu item “-> Image -> Scale Image”, set the scale factor to 50% and the interpolation to “Linear” and click on the “Scale” button: 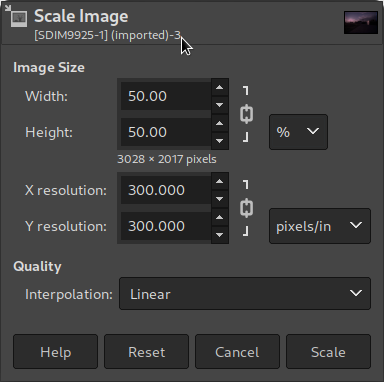 Now we have obtained a “Foveon-like” full color image. We choose “-> File -> Export as” to save it again as a TIFF, either overwriting the original file or saving it under a new name.

The image now looks underexposed (because we lowered the green channel) and probably has a color tint: 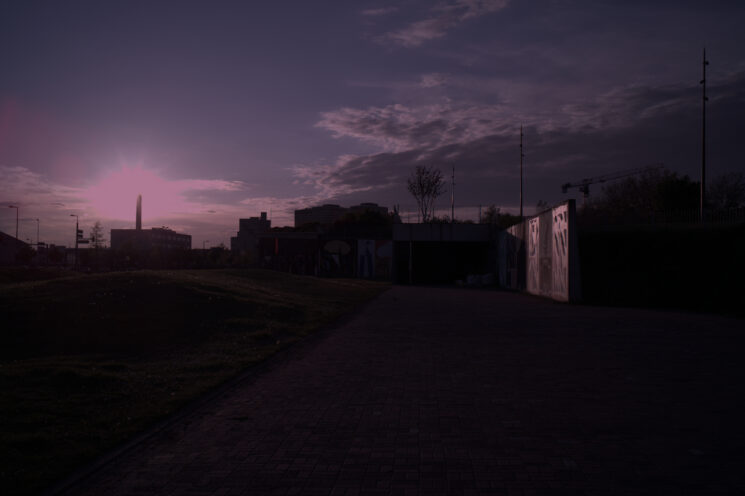 If you are familiar with The Gimp, you can make all the remaining image corrections (white balance, exposure, and contrast adjustment) in that program. Otherwise, it is more convenient to do these in your favorite image editing program.

When we return to RawTherapee and edit the TIFF image exported by Gimp there, it will appear as an HDR image in the thumbnail navigation panel:

Darktable can also output undebayered images and even downscale them during export, so that the roundtrip via Gimp is no longer necessary.

Making the right image settings may be a bit more difficult at first:

Turning off debayering in Darktable 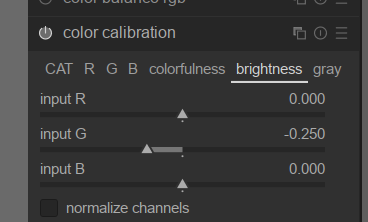 After exposure and white balance correction, we get images like those below. In each instance, the “Before” image is the standard Bayer image while the “After” is using this Foveon-like processing technique, scaled down to 50% of original dimensions. 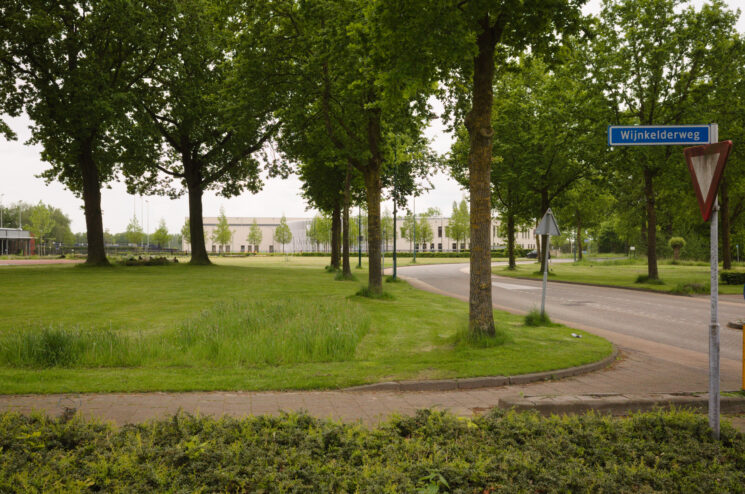 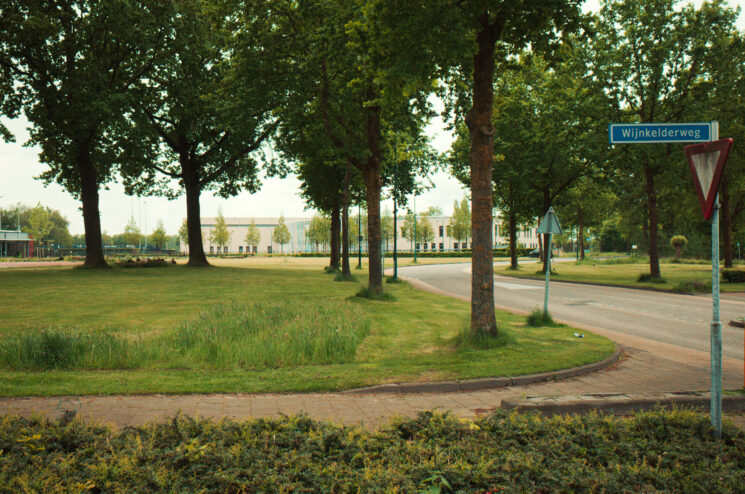 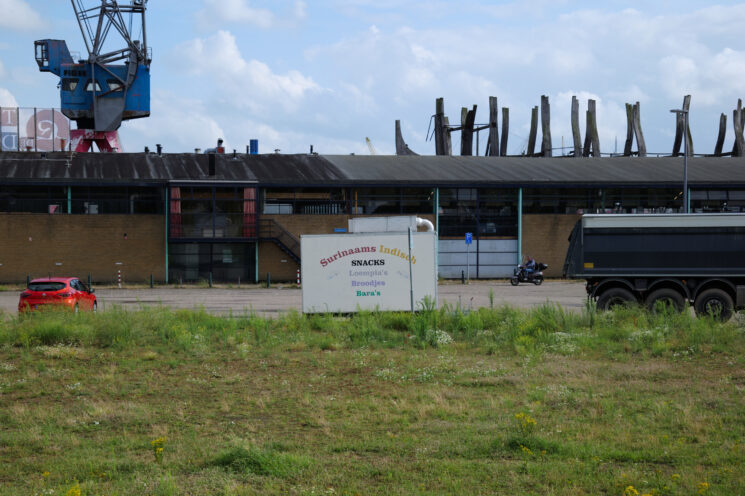 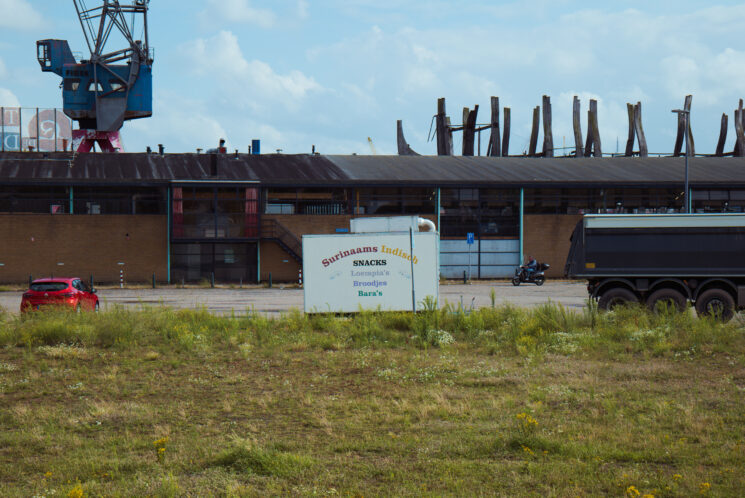 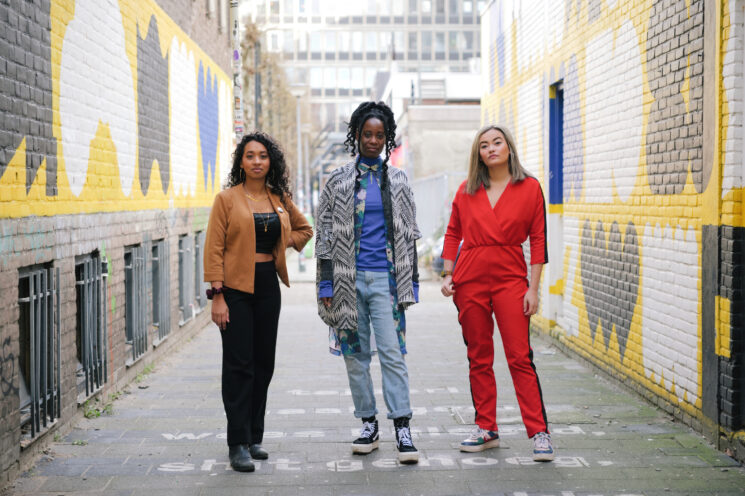 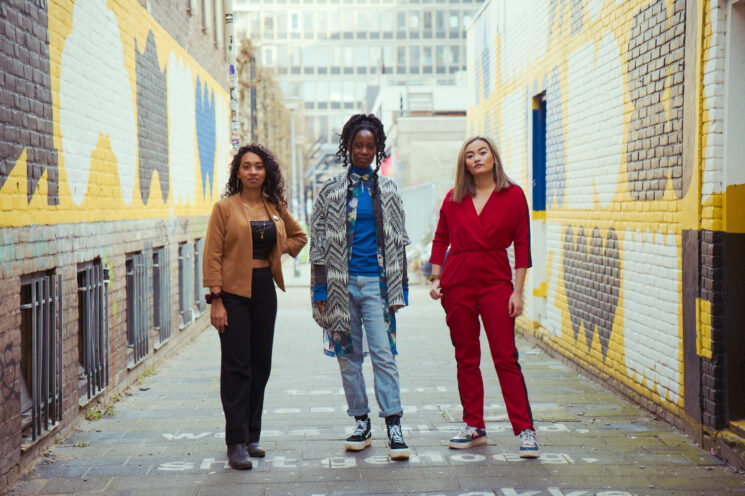 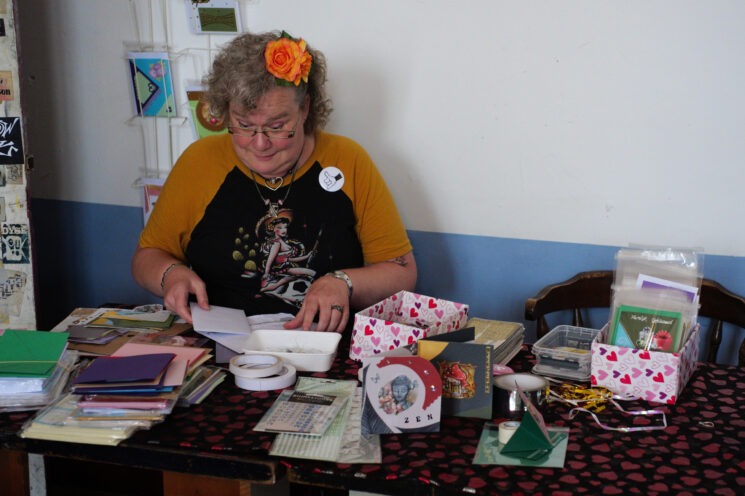 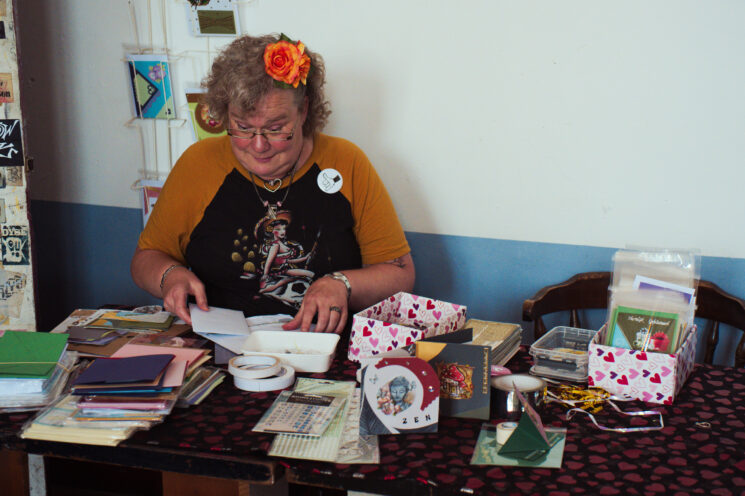 It can be difficult to compare results because in the “Foveon-like” process we completely bypass the camera manufacturer’s color science (and color calibration). In most cases, we simply get other kinds of colors. It’s similar to shooting two completely different film stocks with an analog still camera, such as negative film (traditional debayering) and slide film (our DIY Foveon-like RGB downsampling process).

Comparing the same camera images that were (a) conventionally debayered and downscaled by 50% and (b) RGB downscaled in our DIY “Foveon-like” process, the following differences become clear:

Owners of real Foveon cameras might find some of the above features and issues familiar, especially when they process their raw pictures with third-party software.

For the future, it would be great if this alternative RGB downsampling method could be provided directly in software applications (for example, as part of libraw, the Open Source debayering engine of RawTherapee and Darktable).

The process described above can be greatly simplified and even improved when using Linux or a compatible terminal command-line environment (like macOS Terminal with the Homebrew package manager or Windows 10/11 with WSL). Libraw includes a small command-line tool called “4channels” that converts a raw image file into four separate TIFF files for each of its red/green/green/blue color channels. Using the command-line image converter Imagemagick, we can reassemble these split files into a new, “Foveon-like” RGB image.

Here is a shell script that automates this process:

You can save this shell script under a name like “truergb”, make it executable (by typing “chmod 700 truergb”), put it in a system directory for executable programs (usually: /usr/local/bin/) and convert your raw image (such as: test.dng) by typing “truergb test.dng”. The result is a 32-bit color TIFF file “test.dng-truergb.tiff”.

Because our script applies an sRGB curve to the merged color channels, the output image looks better and requires fewer visual corrections than images created with RawTherapee/Gimp or with the Darktable workflow. As described above, you can make these final corrections in an image editor of your choice (RawTherapee, Darktable, Gimp, Photoshop, Lightroom…).

To convert a whole set of Raw files into Foveon-like images in one go, open your terminal, go to the folder where the files were saved (using the “cd” command) and type:

After finishing this command, you will find all “Foveon-like” TIFF images in the same directory as the original raw image files.

Florian Cramer is an arts scholar based in Rotterdam, Netherlands. Florian teaches at the Willem de Kooning Academy in Rotterdam and has written and co-authored a number of books on various art and design topics. You can find out more about Florian on his website and browse his many video creations on Vimeo.