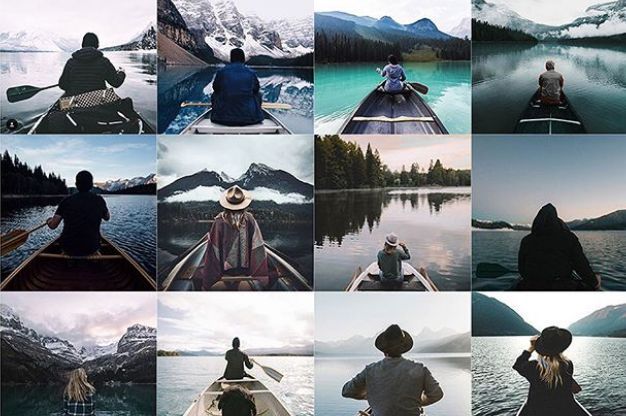 If you spend some time scrolling through Instagram feed, I’m sure you’ve noticed that many people post same or similar types of images. The woman behind @insta_repeat account has noticed that as well, so she has decided to create an Instagram account mocking this trend and pointing out to the lack of originality.

The person behind @insta_repeat is a 27-year old woman, a filmmaker and an artist living in Anchorage, Alaska. However, she doesn’t reveal her identity. The motto of her account reads “Wander. Roam. Replicate.” and there are collages of cliché travel images you’ll see all over Instagram. Here are some examples, I’m sure they look familiar.

In an interview she gave to Photo Shelter, the woman behind @insta_repeat said that photos of “adventurers” and “explorers” from around the world inspired her to create the account. Many of these photos look the same, and the purpose of @insta_repeat is “to critique originality in media creation.”

Although I like the idea of trolling unimaginative Instagrammers, there’s one thing I have to notice. Some photographers and videographers have already done it in a similar way, creating videos that show all the clichés of Instagram. So, perhaps, it could be that criticizing Instagram clichés is slowly becoming a cliché itself.