Film is definitely back on the rise, to the point where Fuji may even be bringing some of theirs back. While most of the films available today are C-41 negative films, E-6 transparency film (also known as slide film) is still available, and quite popular for certain things. But how do you know when to use which? And what are its limits?

That’s what Jay P Morgan explores in this video. What is transparency film? What is its dynamic range? How does it compare to standard C41 negative film? Why and when would you choose slide film over negative film? He compares Kodak Portra, Fujifilm Provia and Fujifilm Velvia to find out. 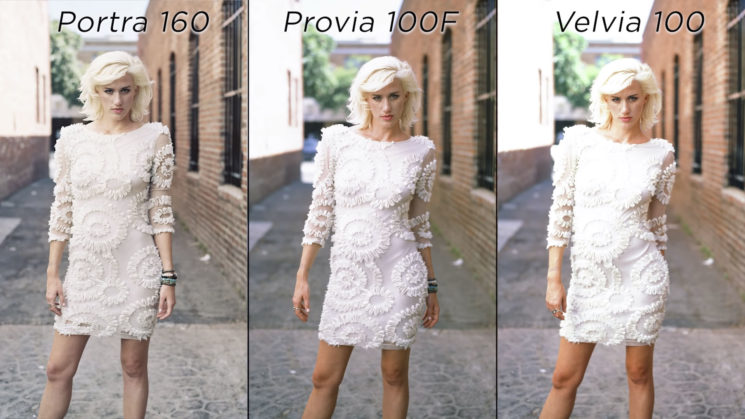 One of the big things about slide film is that your exposure really needs to be perfect. Some negative films can be overexposed by as much as 6 stops and still hold detail in those bright highlights. But if you overexpose slide film, as with digital, that detail is simply gone.

You can see in the image above that the Portra C41 negative film still has some detail even in the very brightest highlights. The Provia has blown out a few highlights, but much of them are gone completely on the Velvia.

When you underexpose the shot and bring it up in the scan or darkroom. Here you can see Jay went all teh way to -2EV to be able to capture that detail in the highlights, and while the Portra looks pretty much the same as a well exposed shot, Velvia isn’t quite so forgiving. And at -3EV, the Velvia loses just about all of its shadow detail. 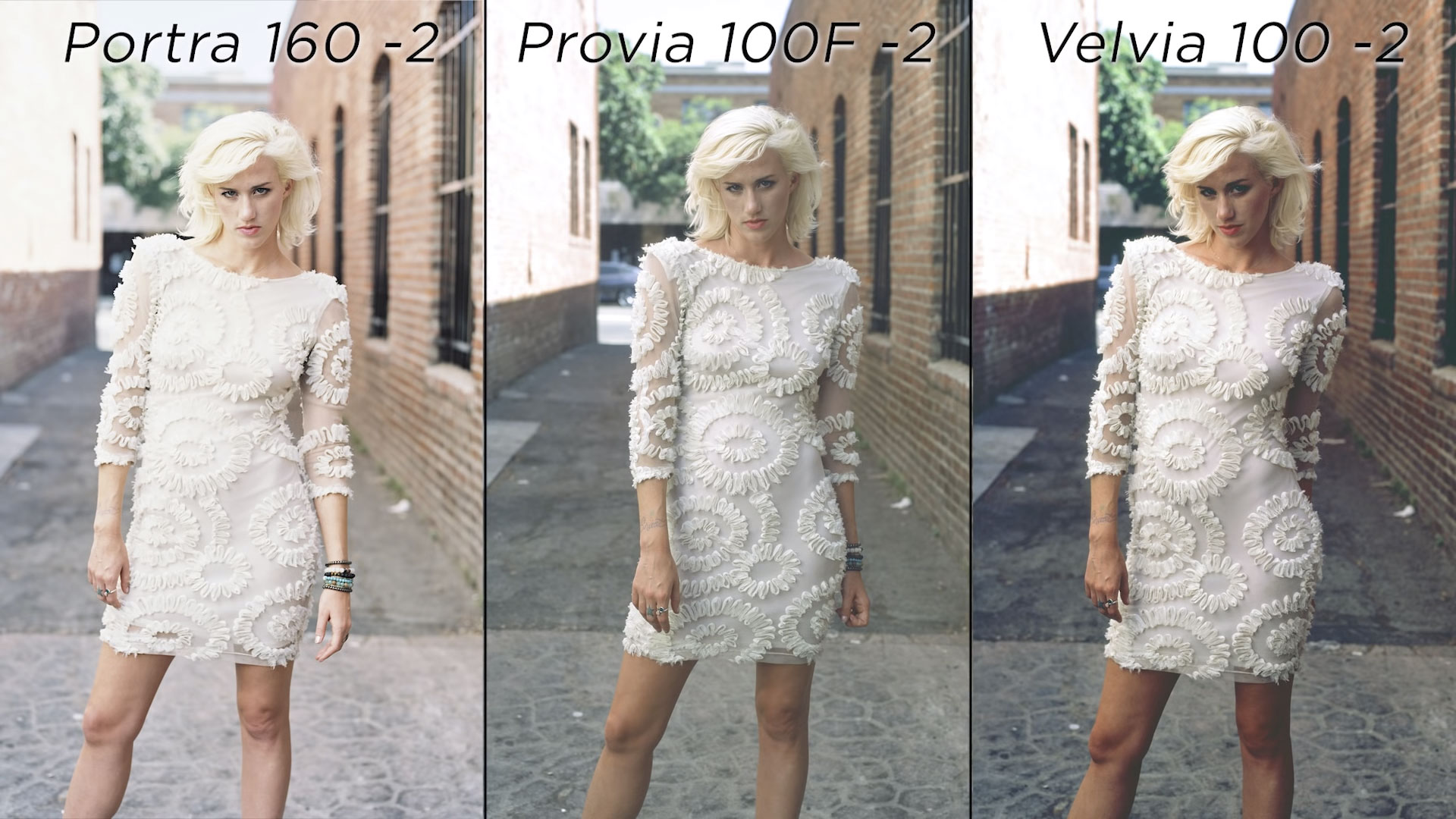 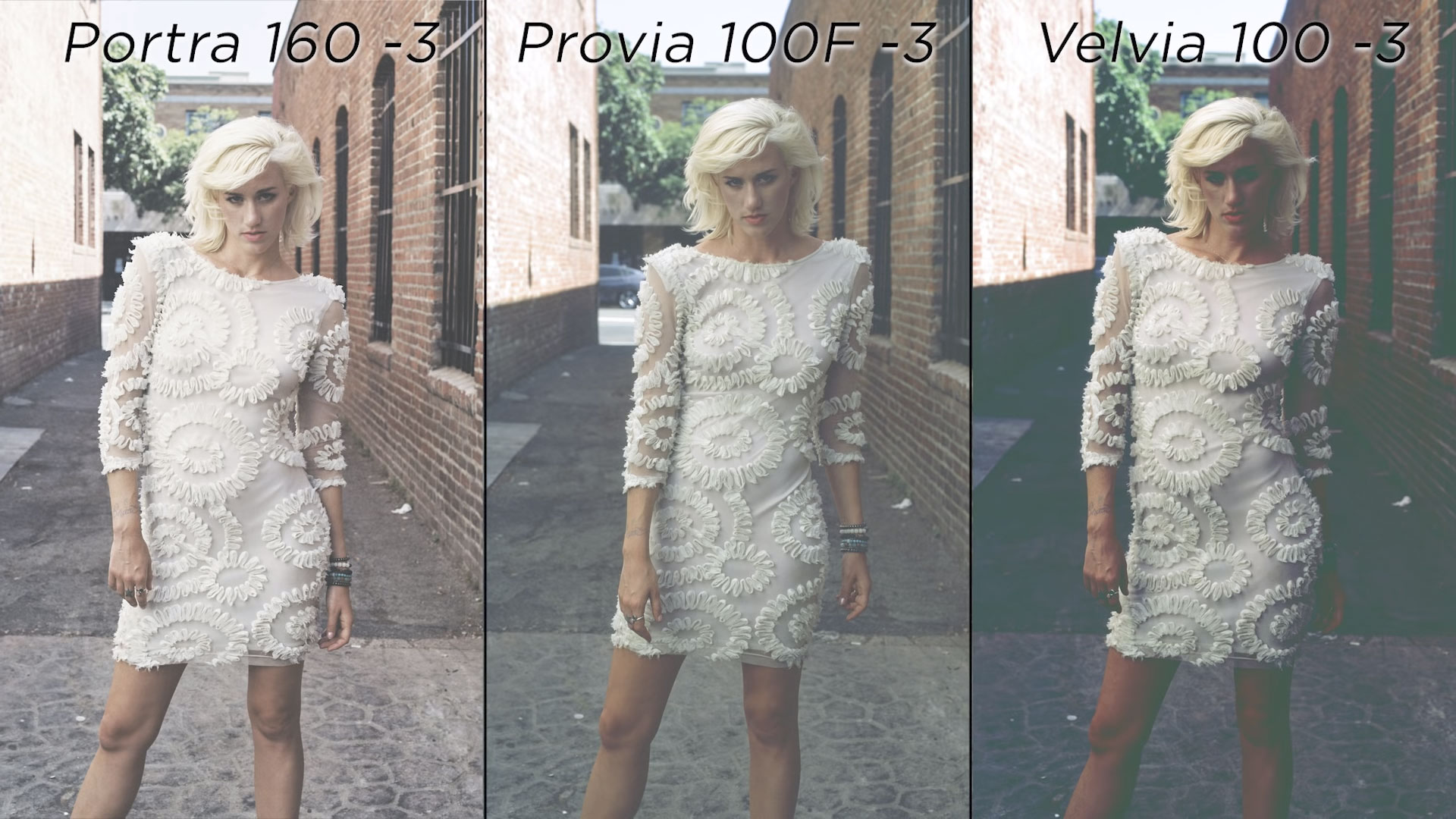 The Provia is handling a little better, but still not great. It loses a lot of colour and tone. The Portra, on the other hand, doesn’t actually look that terrible. It’s still quite similar to the original well exposed shot.

Going the other way, and overexposing the shot, things break down much more quickly. Again, Portra still looks pretty good, but both Provia and Velvia have completely blown out any highlight detail, making it impossible to recover. And at +3… well, see for yourself. 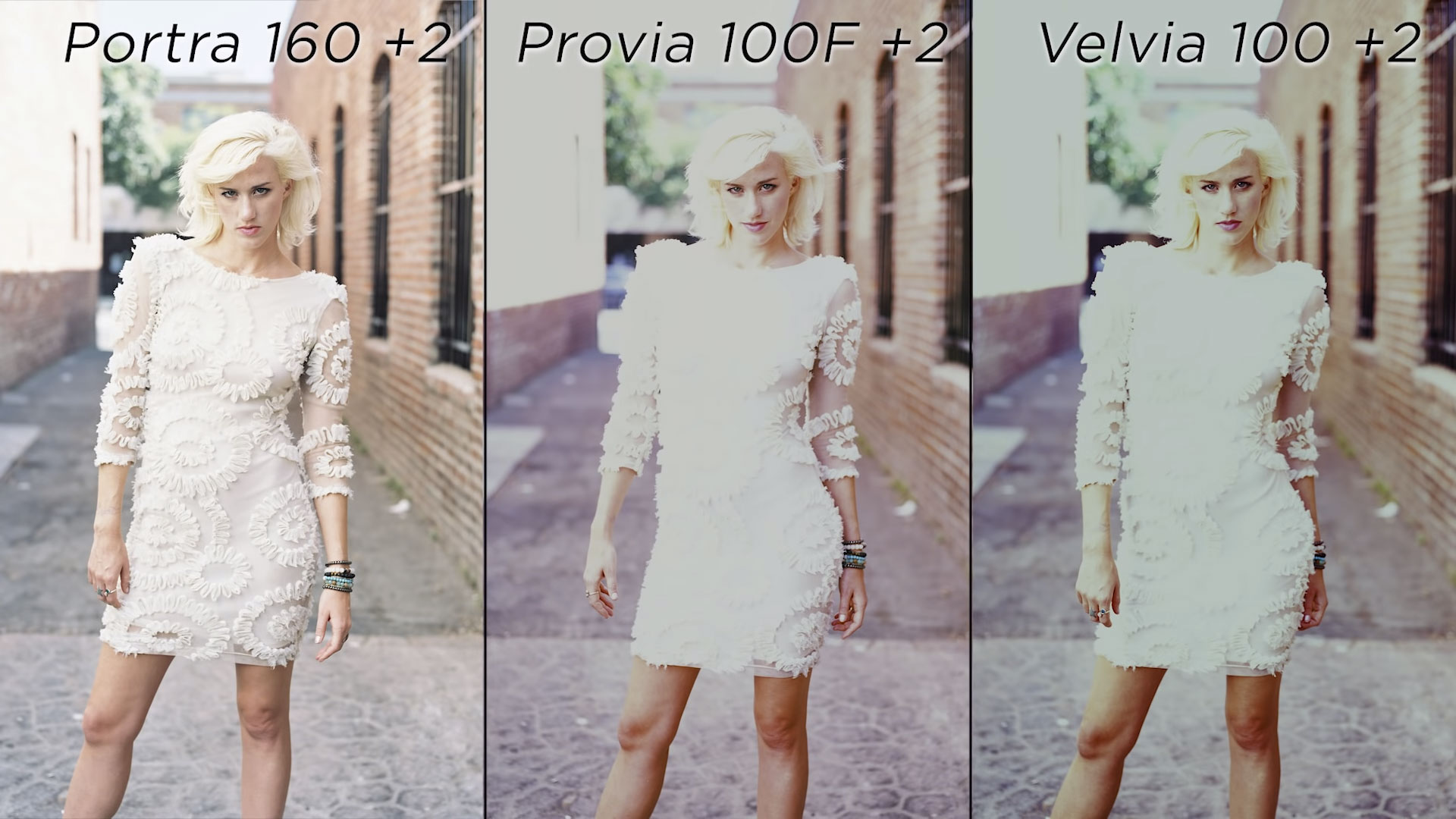 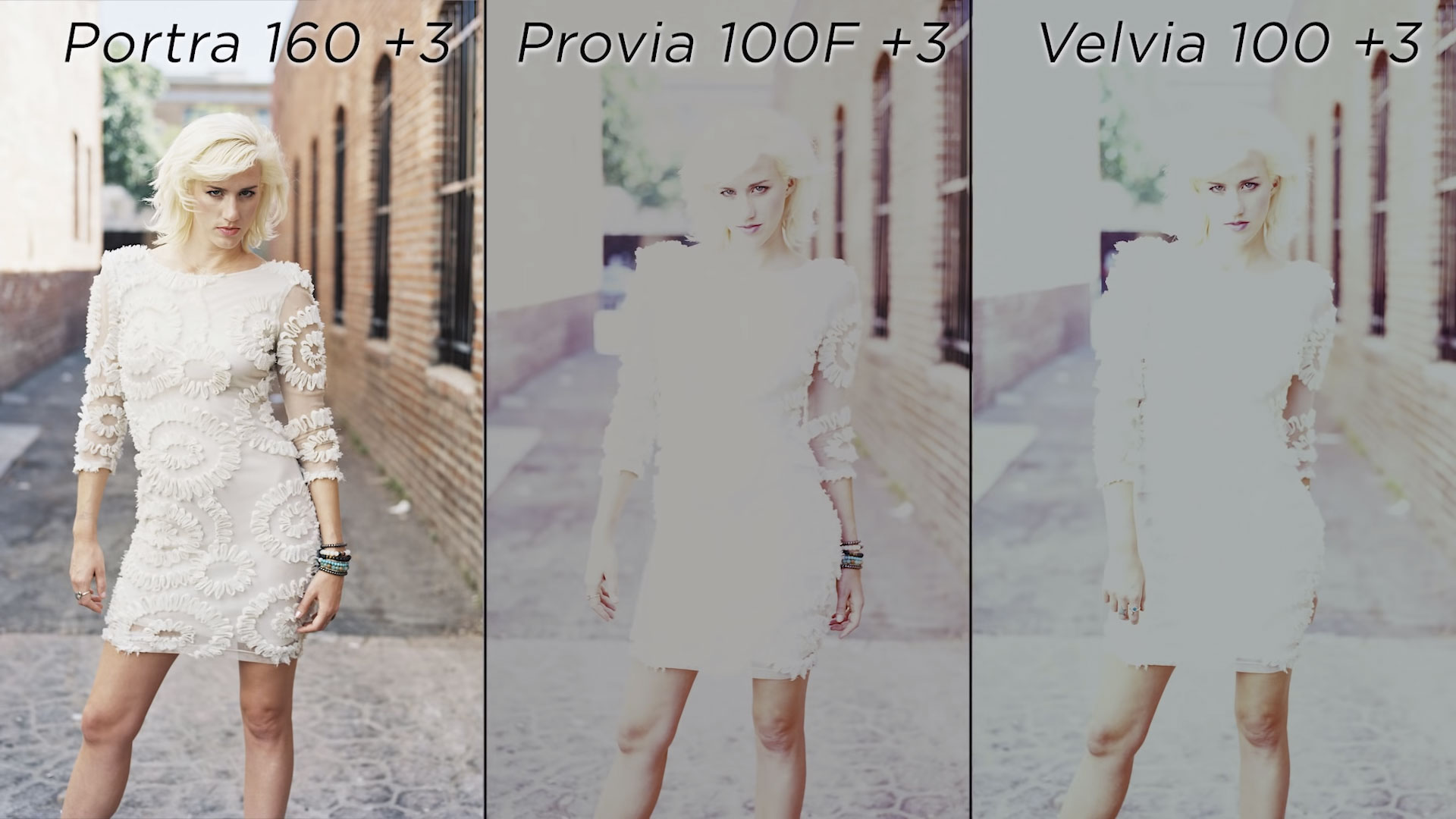 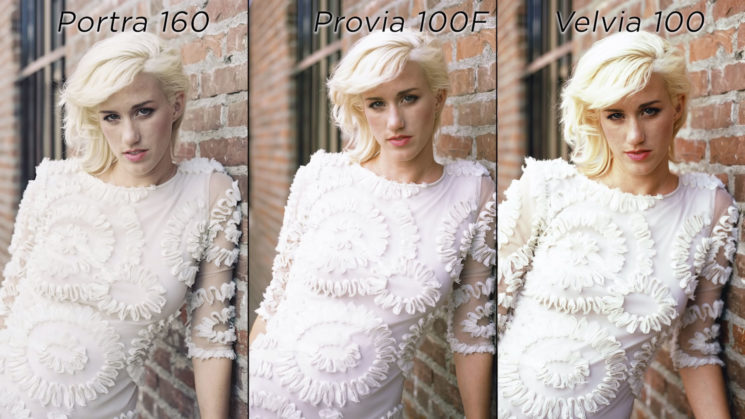 When the shots are well exposed, and you get highlight and shadow detail, you can really start to see the differences in their colour. The Portra has that kind of look that many Instagram filters and Lightroom presets try to emulate as “the film look”. As you can see here, though, there is no “the film look”. All three of the images above were shot on film and they all look quite different.

When it comes to transparency film, Jay prefers Provia for portraits. He feels the Velvia is a bit too strong, and I can’t say that I disagree. Velvia’s a favourite of landscape photographers and for good reason. I’d probably leave it at home if you’re shooting portraits, though. 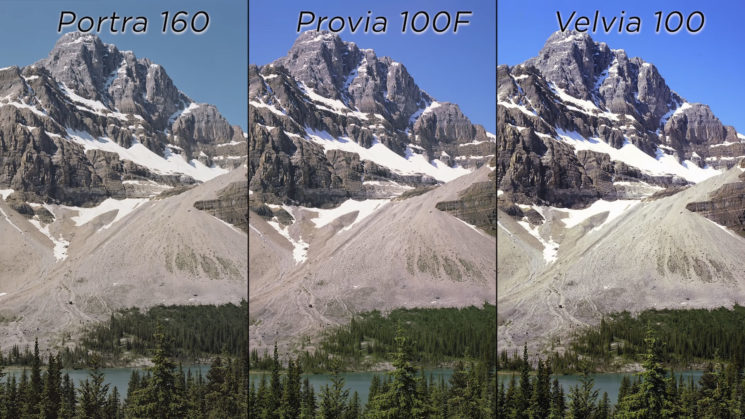 You can really see why Velvia is the choice of many landscape film shooters when you look at the images above.  The colour saturation and contrast just look amazing. That punchy look that Velvia offers just works for landscapes, and offers a very natural and realistic result. But you can see in other shots that you have to be very careful with your exposure, or might blow out important details like snow and clouds. 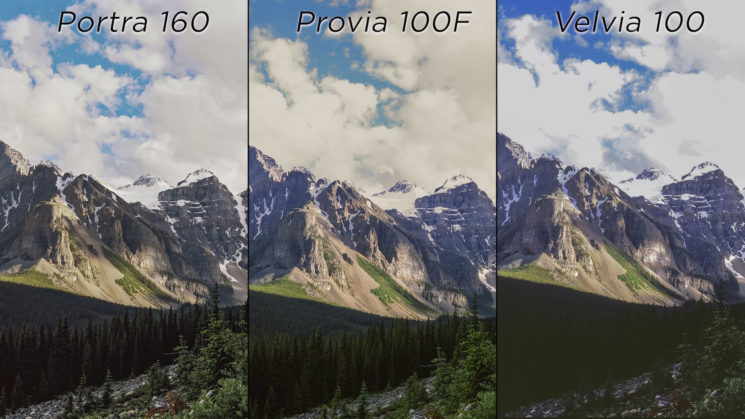 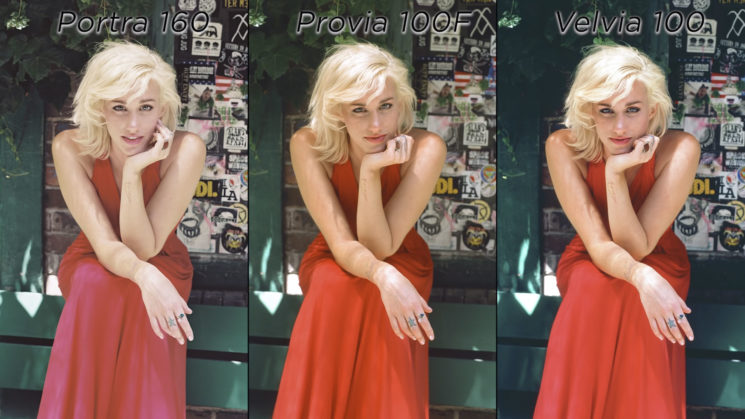 There are exceptions to the “don’t use Velvia for portraits” thing. Like when you’re shooting in shade, for example. The light in the shade is generally much cooler than strobes or sunlight. So, that warmth and saturation of Velvia can really help to produce a fantastic skintone.

A few more tests and comparisons are shown in the video, and it’s interesting to see how each of the films reacts to different situations.

The key things to remember, though, are to know how the film will react to different light and colours, and also to meter religiously to make sure you don’t blow out those highlights.

A crash course in developing colour negative film at home