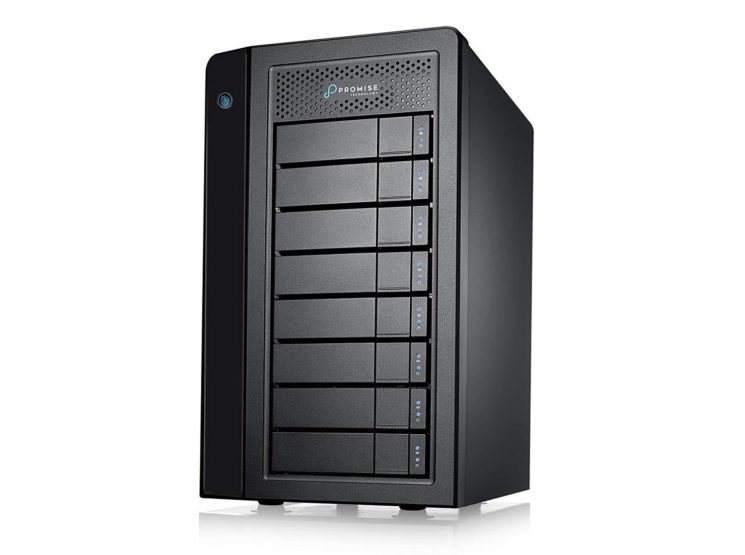 With more and more of us shooting 4K footage, fast, large storage is becoming a must-have for those of us editing this footage. For the last few years, I’ve been using the Promise Technology R2+. It’s a two-bay thunderbolt 2 RAID array with a cool feature that it has a third bay that you can swap out. I normally have a card reader in there as it allows me to copy footage from cards at the fastest speed.

The R2+ has served me well, but, as is the way with tech, it’s starting to show its age. To begin with, the 6TB of storage it provides me is starting to be just a bit too small for my needs. I normally have anywhere from four to six editing projects on at the same time and each of those could be anywhere from 1TB to 3TB. So 6TB isn’t enough space anymore.

Even if it was enough space, I am starting to get beach balls on my Mac when trying to edit footage of the R2+ and so I think it’s also getting too slow for what I am demanding from it. I’m pretty sure it’s not the Thunderbolt 2 connection. I know it’s not Thunderbolt 3, but Thunderbolt 2 is still plenty fast for most of what we do.

For a while, I was looking at maybe getting two SSD drives to replace the two 3TB drives in the R2+ which I figured would speed things up. Of course, the problem here is that SSDs that are about 1TB or 2TB are not cheap and then I’d have even less space than I have now… 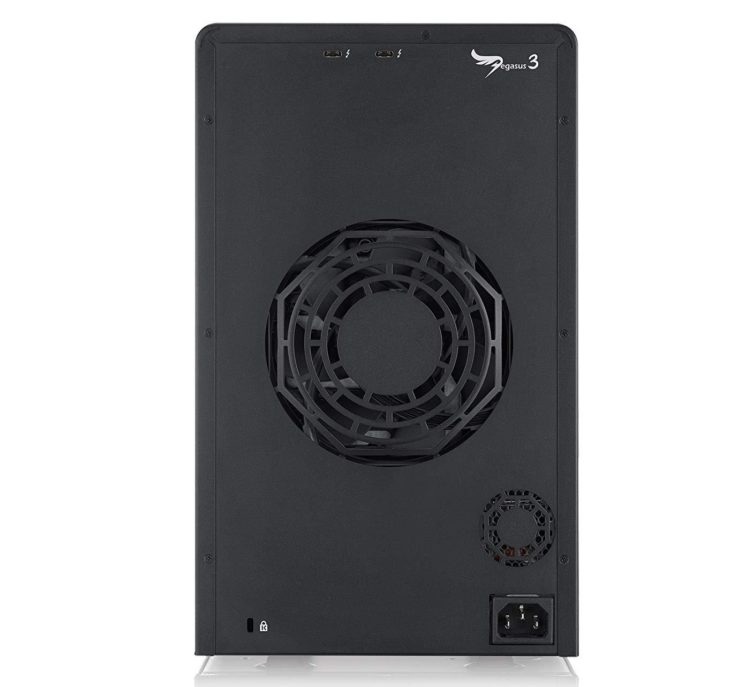 I then had a very interesting conversation with an engineer from Seagate at SMPTE. He suggested that if I got a RAID with five drives or more, being able to use RAID 0 with that many drives would give me the speed I need. It wouldn’t be as fast as using SSDs but it would be fast enough, it would give me far more storage and it would be noticeably cheaper.

So when Promise agreed to loan me one of their Pegasus3 R8 units. I jumped at the chance.

The Pegasus3 R8 (Amazon), as the name would suggest, is an eight-bay RAID array that has Thunderbolt 3 connections. It has two Thunderbolt connections, which is good as it means you can daisy chain it to more Thunderbolt devices.

I got the unit with the smallest storage amount which is 48TB, it also comes in a 60TB and 80TB configuration. There are also other models in the thunderbolt range. There is also the R6 and R4, the numbers, of course, denoting how many bays each unit has.

My review unit arrived setup in a RAID 5 configuration which means that one of the drives is used for redundant backup. This means that one entire drive can fail and you won’t lose any data. I was going to re-configure it into RAID 0 which is the fastest type of RAID, but also the most dangerous as, in that setup, if even one drive fails you then lose everything. But I thought before I did that, I should at least test the speed of the unit in RAID 5. I am super glad I did, because even with using the safer, slower RAID 5 setup I was getting speeds of 1090.6 MB/s write and 583.1 MB/s read. This is more than enough to be editing multiple streams of 4K footage at the same time.

Just before I sent it back I did reformat it into RAID 0 just to see what kind of speeds I could get and the tests showed 1189.2 MB/s write and 1304.5MB/s read.

Another thing I really liked is that the drives are really easy to replace. They sit in little caddies in the unit so replacing them is as easy as pulling the caddy out, changing the drive and putting the caddy back in. Of course, you want to turn off the unit before you do all this. Also, keep in mind that, when replacing drives, they need to be the same size or larger than the drive you are replacing. This is for when/if a drive fails.

You can install a really handy utility app onto your computer from Promise that allows you to manage and maintain the device. It should also warn you if there are any potential issues with your drives, so that you can hopefully fix or replace things before they fail.

These bad boys are not cheap. From what I can tell, you can’t just buy the bays on their own and I can see the logic behind this. Promise are offering you a high-end device that is going to give you high-end results. If they allowed people to start installing whatever drive they wanted, people would most likely use slower, cheaper drives that wouldn’t give them the kind of performance that Promise is, well, promising.

As I’ve said in previous articles about gear, this is a not a toy; it’s a tool that you’re going to be using for your work. So, even though they start at $3,782 for the 32TB model, trust me when I tell you, the time this saves you in moving files around and being able to edit without any bottlenecks, makes it totally worth it, at least to me.

The Glyph Atom Raid is not an SSD, it’s a Rocket!

« All YouTube videos look the same, but here’s how you can be different
Sometimes, maybe, you should just put your camera away »