The names under which Godox gear is rebranded around the world can get a little confusing at times. Here in the UK, this is the Pixapro CITI600 Pro. In the USA it’s the Flashpoint Xplor600 Pro and the Godox AD600Pro depending on where you buy it. In various other countries, it’s sold under other names, too. From here, I’ll just call it the “600Pro”. But wherever you buy it, no matter what it’s called, this is an outstanding portable strobe. I’ve had one myself for a few weeks now (review coming soon), and it never fails to impress me with its speed and power.

As with the AD600 TTL, the 600 Pro is a 600Ws strobe with support for both high speed sync and TTL. But this isn’t a successor to the AD600 TTL. It’s simply a higher-end model in the Godox lineup. The AD600 TTL (and AD600 manual versions) will still be made and sold alongside the new 600Pro. But what are the big differences?

Well, we’ve been through the whole list before, but the short version is that it offers a much faster recycle time with more consistent colour accuracy throughout the power range and a more powerful modelling. So you don’t need to worry about colour shifts when you drop from full power to 1/32nd power, nor whether it can keep up with photographing fast action at 10fps. 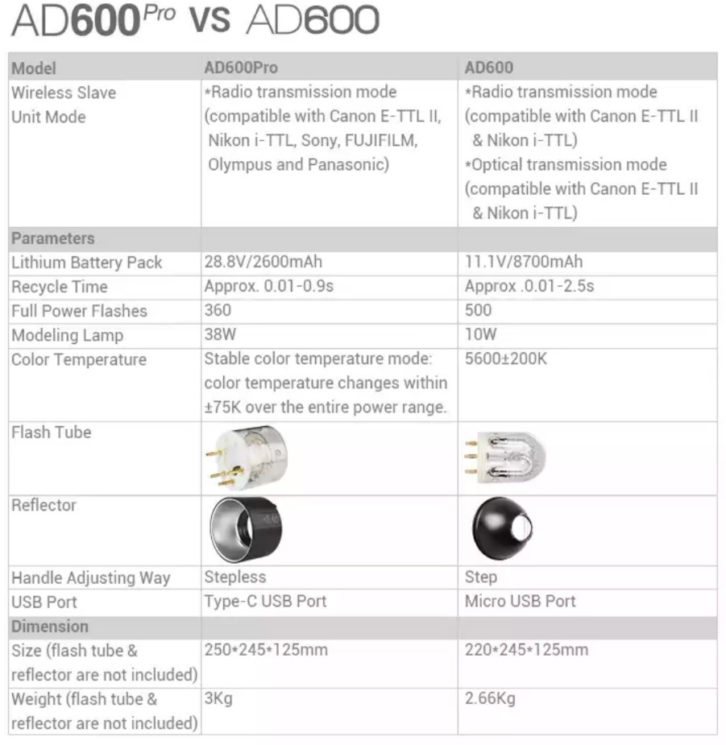 The 600 Pro is compatible with all of the existing Godox (and rebranded) kit. It performs well with the X1T, XT32 and XPro triggers across all compatible brands (Nikon, Canon, Sony, Fuji, Olympus and Panasonic). I’ve been using mine alongside a pair of AD360II with XPro triggers, and it hasn’t missed a beat. I’m quite looking forward to trying it out when the sun decides to return to the UK for a few days.

Although the official specs suggest that the battery is much smaller in overall capacity, personally I’ve not found the overall difference to be that different for my own needs. It’s rare that I’d drain a 600Pro, AD600 or AD360II battery in a single day’s shoot. Your own needs might be different, so be sure to invest in a spare battery or two if you think you’ll need them.

For many existing AD600 or AD600 TTL shooters, whether or not it’s worth switching to the 600Pro will depend on you and your needs. For some, the faster recycle time may not be much of an advantage, and the potential colour issues might not be too much of a problem depending on what you shoot. Especially given the cost of the new units vs how much you’ll get in the used market for your old ones. But if you don’t have any of the more powerful Godox strobes yet, it’s definitely worth taking a good look at the 600Pro to see if it’ll suit you better. The price difference between the AD600 TTL and the 600Pro isn’t really that much at all.

In the video, I mention that this is the last of our The Photography Show content, but it’s not quite. There are still a couple of more videos to come. For now, though, if your flash cravings aren’t satisfied, have a watch of these.