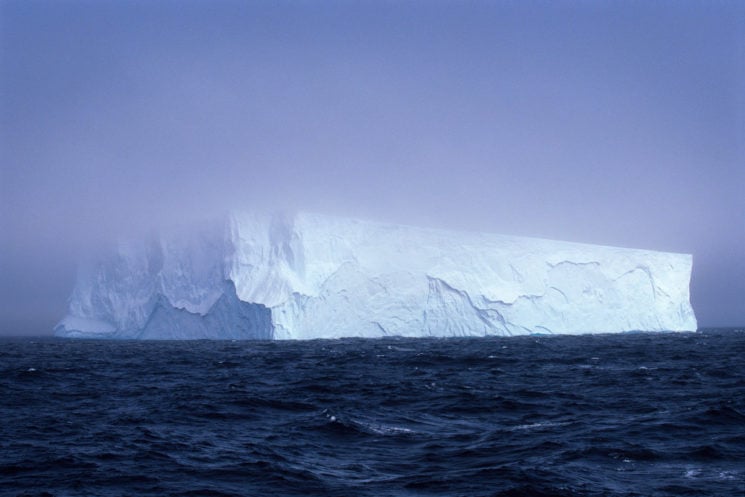 To those who follow my work closely, you may know that I consider myself a large format photographer. I will photograph with a medium format camera, particularly when I’m trying to save weight on a backpacking trip or save time when I’m teaching a photography workshop, but 35mm has been somewhat shunned in my arsenal, being a format I deemed too small to be used effectively for my work.

In late 2017, Kodak Alaris announced they were going to rerelease a redesigned version of their old Ektachrome film stock as E100 in 35mm. When I heard this news, I was absolutely thrilled. Lately, film stocks are being discontinued left and right, from particular sizes, to the entire stock altogether. With Kodak releasing a NEW film stock, I feel like there was a bit of light at the end of the tunnel – especially for transparency film. While I was disappointed it would not be announced in medium or large format film, I decided to give it a shot in 35mm.

My first pack of rolls finally came in during the fourth quarter of 2018, and I decided that what better opportunity to try out this new film than at the bottom of the world? I had my second trip planned to the Antarctic peninsula where I was teaching with Muench Workshops in December of 2018, and figured I’d toss in a few rolls with my Nikon F5 and give it a whirl. 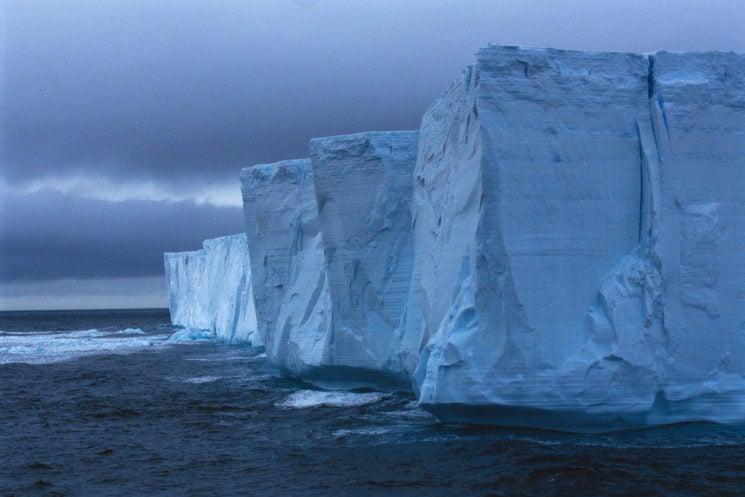 After shooting about 6 rolls, I selected about 20 frames for drum scanning. The scenes varied, and lenses used were a Voigtlander 40mm Ultron, a Nikon 70-200 f/4, and a Sigma 160-600. My favorite shots tended to be closer to the telephoto and super telephoto range with a shallow depth of field. With high resolution drum scans, you’re able to truly analyze grain unlike any other scans and with E100, and I was impressed. When compared to a film such a Provia 100F, the grain seemed smaller, more even, and produced slightly sharper images.

Overall, I was very impressed with the film. It metered easily, and performed as expected for a transparency film. Fortunately, in Antarctica, my dynamic range was relatively limited (it was all pretty much white), but even on bright, sunny days, I don’t feel like I had any problems blowing my highlights. Generally, I would say that I would keep this film within the 5-7 stops of dynamic range, as you would with any other transparency film stock.

The color seemed very accurate, neutral, and even. There did not seem to be any overall color cast (which I will discuss below a bit further) and, especially in the deep shadows, there was not any unnatural color casting, as typical with most transparency films.

The most notable benefit for E100 for me was its overall sharpness. When using proper technique and with limited diffraction, the film does seem to be incredibly sharp. Particularly with images with a shallow depth of field, where your subject is in focus and you have a clear out of focus area, the prints resolve amazingly at 24×36”. While pouring through images, pixel peeping each drum scan at 100%, I couldn’t help but be wowed by the sharpness I was seeing with 35mm. Below is an example of a 100% crop from a drum scan of a 35mm E100 frame. 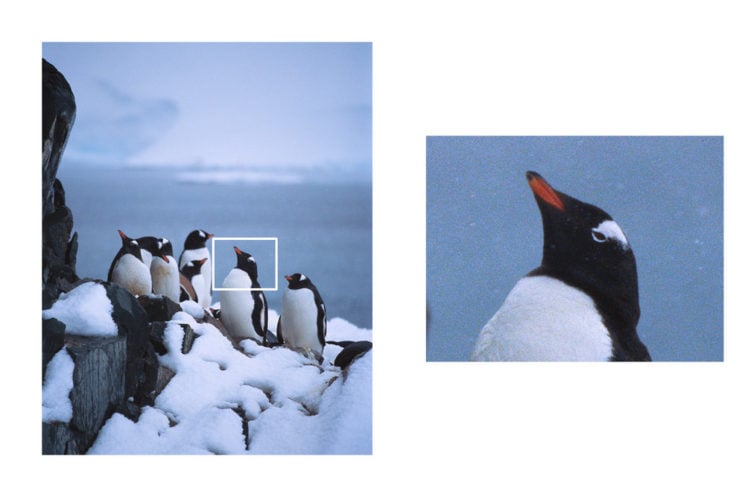 The film also seemed to have a very strong ability to recovery shadows. On my first roll of film through the Nikon F5, I had accidentally set my exposure compensation to under expose by 1.3 stops, rather than over expose by 1.3 stops, compensating for the white snow/ice I was metering. So, as you can fully imagine, everything was drastically under exposed. I decided to go ahead and drum scan a frame from that roll to see what I could pull out, and the results surprised me. The image below is one that I pulled from the darkness, so to speak. Fortunately, the light was very flat, the tones were very even, and everything came out very clean. That being said, I think my results could be challenged with an underexposed image with more dynamic light, but I was still impressed with the information the film stored in the shadows. 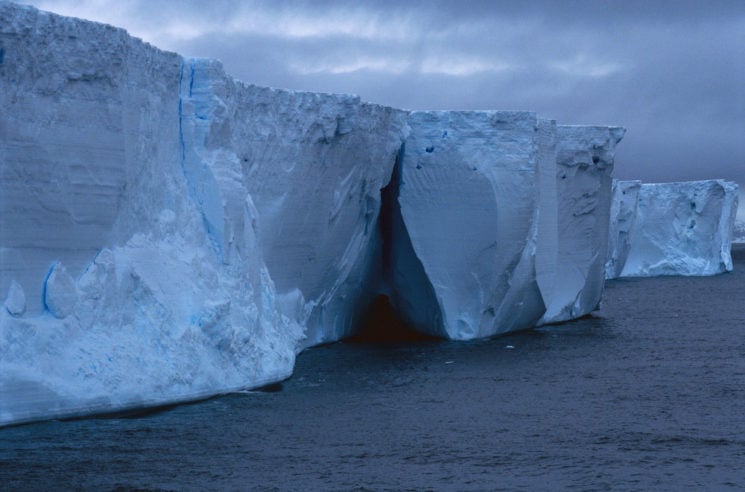 Firstly, most of my frustrations isn’t the actual film stock itself, but more in the size of the film. I think that given what a drum scanned 35mm can provide, E100 will provide some of the best results you can get. 35mm is, in my opinion, somewhat inherently flawed in its size. It’s just too limited. Diffraction is must more noticeable on landscape shots, when your compositions require a substantial depth of field and your aperture is small, and the resolving power of 35mm just isn’t quite there for most traditional landscape photographers who are printing larger prints. 35mm is based around a fast shooting style, which requires fast lenses, higher ISO speeds, and being light and nimble, and all of those seem to be each others Devil’s advocate.

With that being said, I think my biggest issue (and I wouldn’t even really call it an issue) with E100, is its color cast – it’s nonexistent! While some might love this, I somewhat enjoy getting results from transparency film that have a bit of a color cast – that is one of the reasons why I choose a particular film stock. Having a neutral color palette definitely has its advantages, and a bit of white balance can be adjusted for taste after the scan, but sometimes I like to see that in the actual film itself – the film’s character, so to speak. While this is ‘issue’ is definitely a nitpick, it does have its drawbacks. I feel that with some images, they quickly became bland without a bit of a color cast. 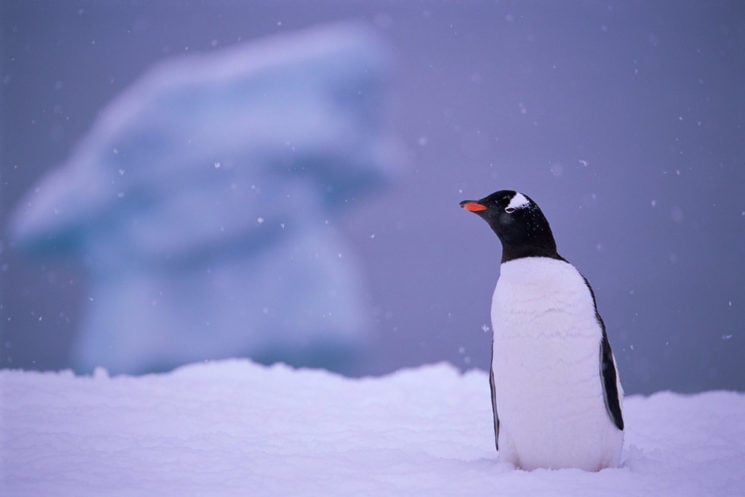 The example above was photographed on Fuji Provia 100F and has a very noticeable blue / magenta cast, which that film is known to have. In my opinion, the slight blue cast absolutely benefits this scene. On a snowy, overcast day, the grays can be a bit overwhelming, and a bit of blue can add interest and emotion to a photograph. Whether or not you want to add this in post processing is your choice.

You must ask yourself what you intend to do with your results, and thusly choose a film based on these results. I’m in the business of making detailed, sometimes very large prints which has always held me back from 35mm because of the dreaded word: grain. Whether you’re shooting 35mm or 16×20 sheet film, grain remains the same size, so as you begin enlarging film, whether it’s scanned and printed larger, or optically enlarged, the grain becomes larger. So it is up to the discretion of the artist who is printing the final image to decide just how much grain you want to be able the viewer to see in the final image.

To me, this is the beauty of film – with digital, you’re just going to eventually see pixels, but with film, you see grain! And grain is beautiful. For me, I have a limit to this. I naturally gravitate towards fine grain film, such as E100, but my limit to printing 35mm will most likely be 24×36 for most prints, which is actually still quite large. These prints I’ve chosen to print at 24×36 are images that might not have as many fine details as a “big landscape” shot.

Check out my prints from Antarctica here. 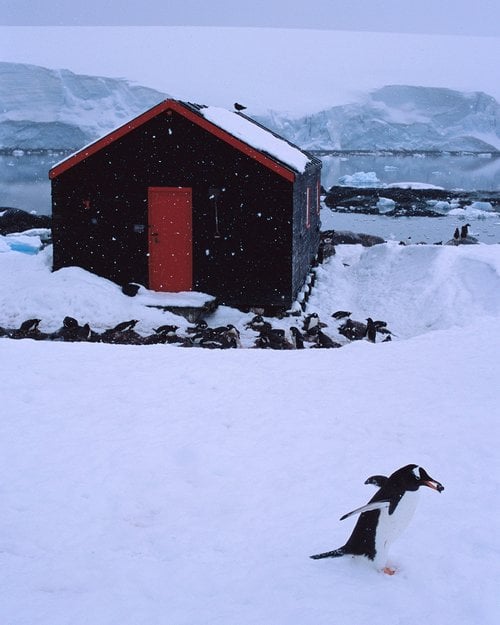 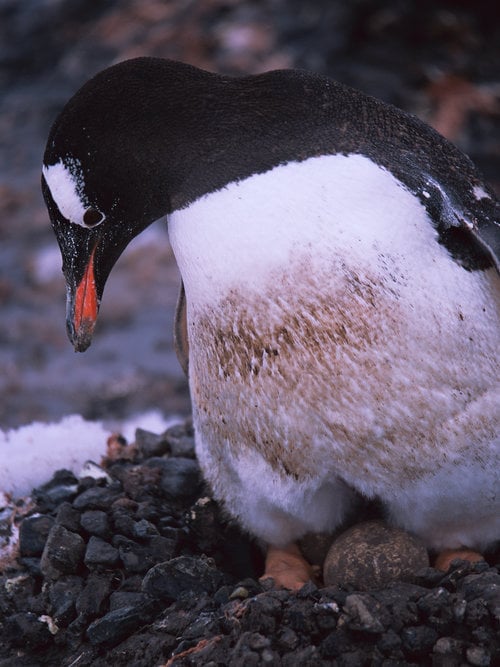 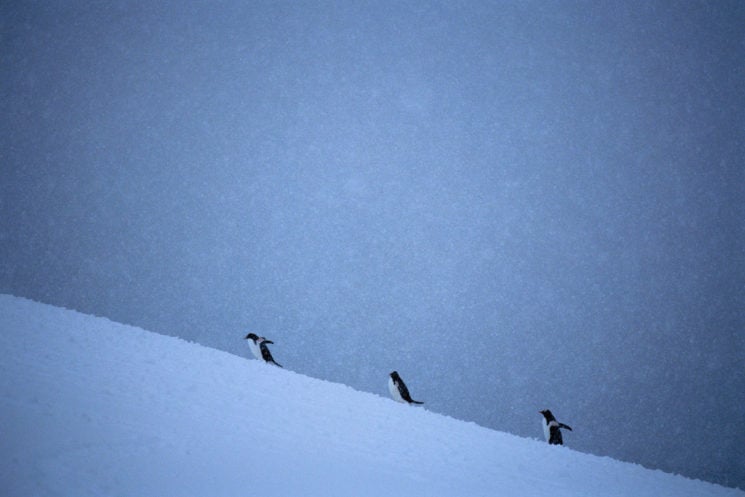 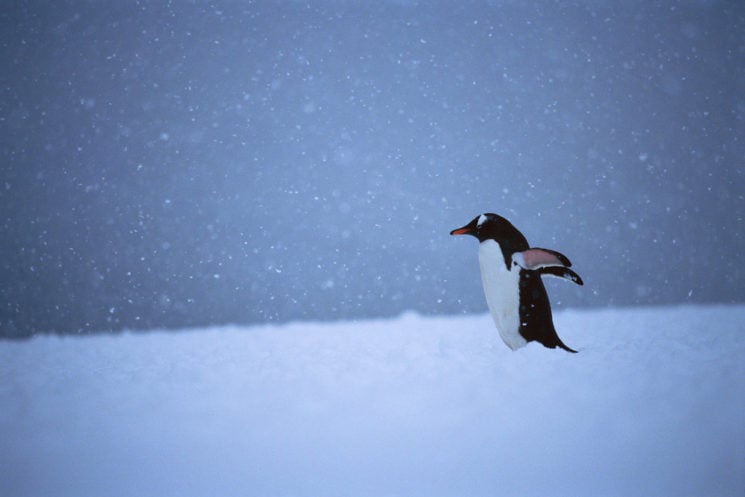 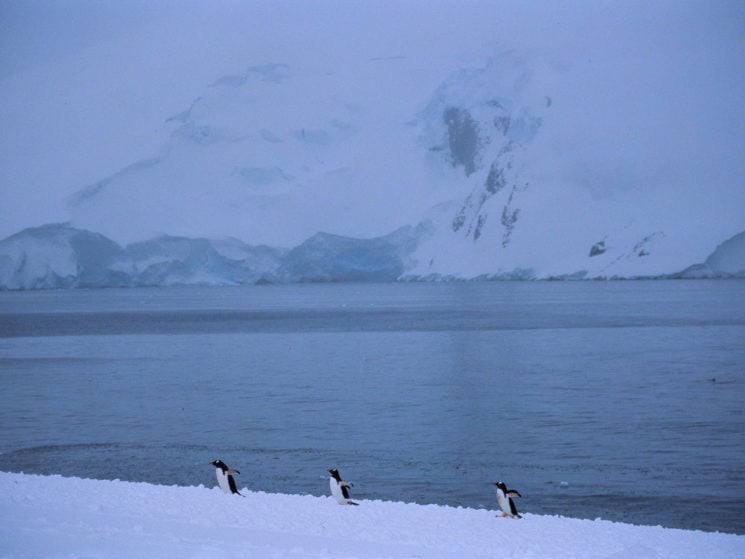 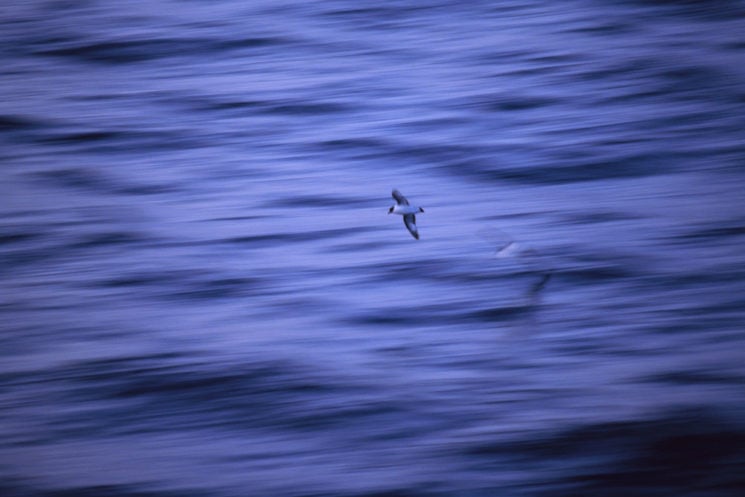 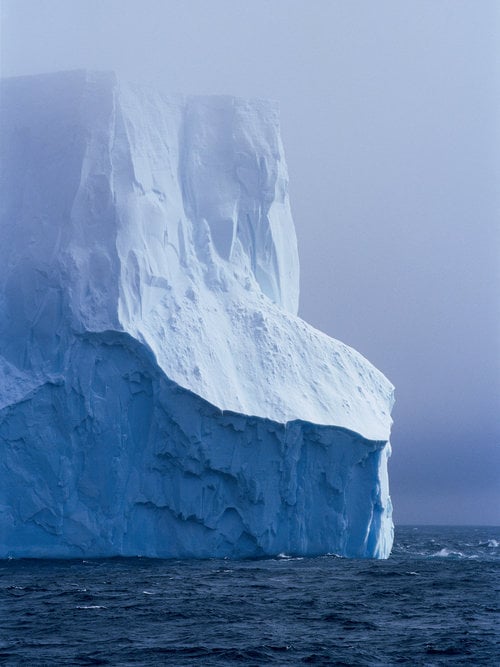 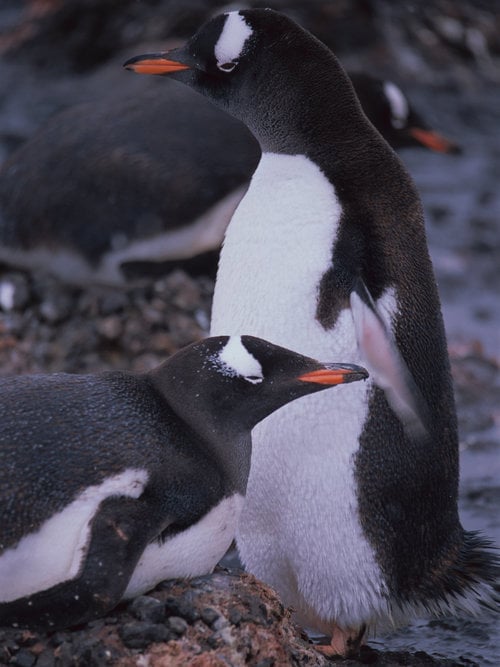 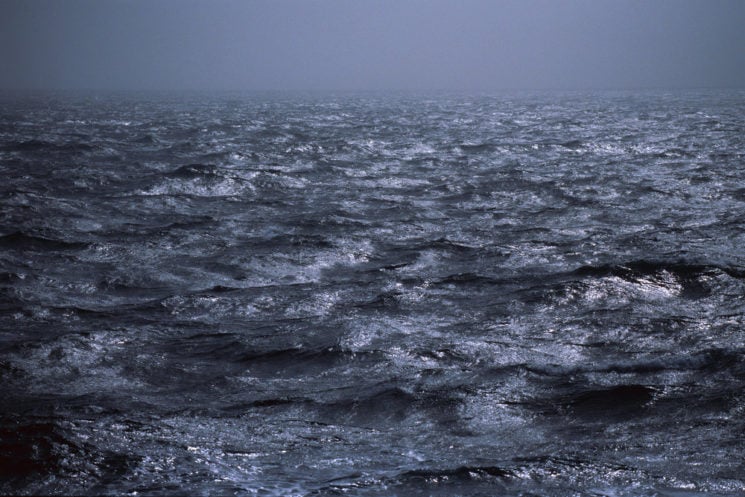 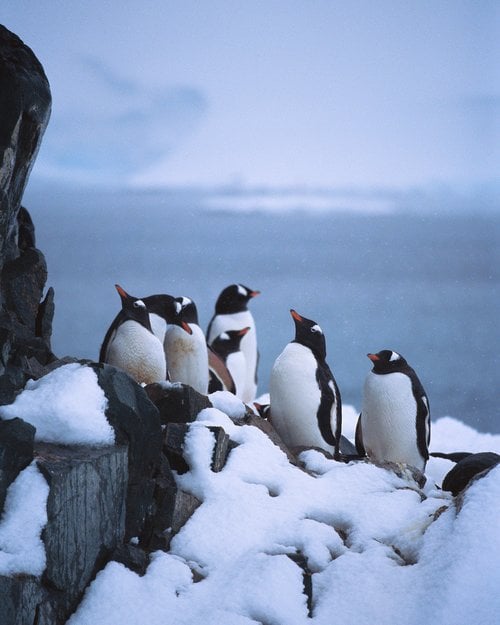 While I’m not exactly a wildlife photographer, I did enjoy photographing portraits of wildlife with 35mm, which probably how I would tend to shoot this film in the future. While I would be comfortable printing some of my images up to 24×36″, most of those images are from a telephoto lens with a shallow depth of field, which doesn’t require a ton of resolving power. For textured, detailed scenes, such as big landscapes, I will stick to at least medium format film moving forward. I don’t feel like I will be using 35mm film for big landscapes, where I have to use small apertures. For those types of scenes, I intend on having a medium format camera alongside, such as my Mamiya 7ii.

Overall, I’m incredibly happy with my results from Kodak’s 35mm Ektachrome E100, and I’m extremely excited to see a company reinvesting manpower into a new transparency film stock. So, will I have room for 35mm in my kit now? Perhaps on certain trips, particularly where I might be photographing more wildlife. I see myself pairing my Nikon F5 with a 500mm lens for my next trip to Antarctica this coming December, and to Svalbard in 2020. We’ll see where it takes me! Now I think it’s time to see it in 120 and large format sheets! Are you listening, Kodak?

Michael Strickland is a Kansas-based landscape photographer with a degree in mechanical engineering. A few years into his career as a landscape photographer, he fully immersed himself in the analog world. He now exclusively works with an 8×10 large format camera, a medium format 6×7, and 6×17 panoramic camera. You can see more of Michael’s work on his website, Instagram and Facebook page, and follow him on Twitter. This article was also published here and shared with permission.

How I “scanned” old negatives with $0 budget, a DSLR and stuff I had at home