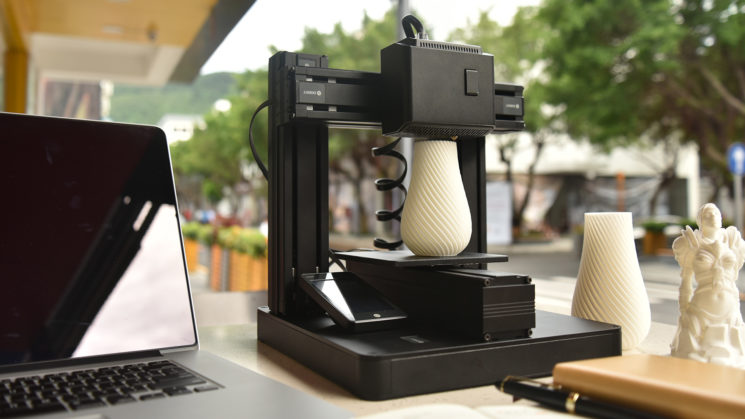 Recently, I’ve been researching 3D printers while considering how one might make my photographic & video life easier. In my search, I discovered that our friends at Dobot were just about to release a new 3D printer, the Dobot Mooz. What intrigued me about it was that it’s not just a 3D printer, but also a laser engraver and CNC milling machine, thanks to interchangeable heads. It’s also modular so you can configure it several different ways.

When I found out that Dobot were going to be attending the BETT Show in London recently and bringing the Mooz with them, I had to go and see it for myself. So, I went to go have a chat with the folks from Dobot, and then tell you guys a bit more about it.

While not strictly photography related, 3D printers have become valuable tools for a number photographers and filmmakers. We’ve written here on DIYP a number of times about 3D printing projects for photographers. There are accessories to help get a little more organised, how to print your photos as 3D lithophanes. tilt-shift adapters, and even entire 3D printed cameras. It’s not much of a surprise that they’ve become popular with as useful as they can be.

Although, officially, this is Dobot’s first dedicated 3D printer, they’re no stranger to the process. Their robot arms, the Dobot M1 and Magician, are capable of 3D printing, too. I actually have a Dobot Magician myself and as a 3D printer it does a rather nice job. I have a couple of photography related projects I plan to do with it in the coming months, and I’ll be documenting the process on YouTube.

That being said, 3D printing is not the Magician’s primary designed function, so it’s not perfect, like a real 3D printer. The biggest issue is that there’s no heated bed, which makes it difficult to work with higher temperature filaments like ABS and PETG. This is one of the things I intend to correct with mine in the coming weeks.

The Mooz, on the other hand, is designed to be a 3D printer first. But it’s not just one 3D printer, it’s three. With a modular design, the Mooz can be constructed in three different ways. But 3D printing is not all it does.

Each of the three configurations offers different advantages depending on the task you want the Mooz to perform. First, the Mooz-1z has a single Z-axis motor for quick setup and prints and is also perfect for use with the laser engraving head. The Mooz-2z has a pair of Z-axis motors & supports for a little more vertical precision, control and power when using the CNC milling head. The third is a Delta configuration, which offers certain advantages over the more traditional Cartesian design for some types of print, particularly those printed in vase mode. 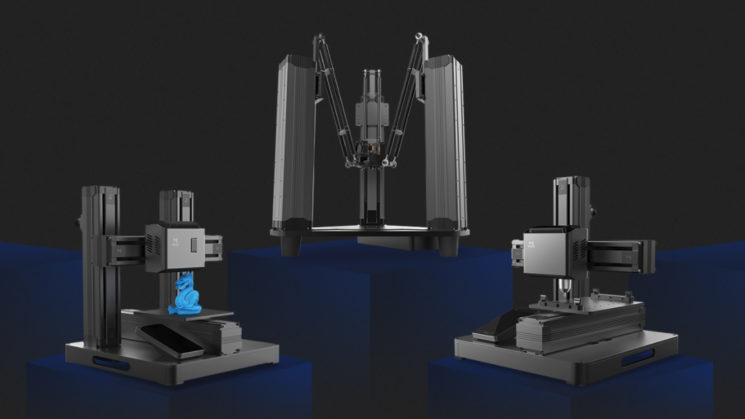 Like most commercially available 3D printers available today, the Dobot Mooz comes with a heated bed and supports a variety of materials. There’s PLA for your basic prints, as well as ABS and PETG for more heat resistant application. It’ll also work with the many more exotic materials out there including various metal, wood and even flexible filaments. Of course, the same caveats will apply to such filaments as they do to any 3D printer.

The Mooz is built from machined aircraft-grade aluminium. In my encounter with it during BETT, I got to see it 3D printing and laser engraving with decent accuracy and there was no discernable wobble at all. Everything felt very sturdy and solid, yet ran very smoothly. While laser engraving, the Mooz at the show was surrounded by a protective shroud. This comes included with the printer, and is a lot easier to deal with than the uncomfortable protective glasses that come supplied with the Dobot Magician. 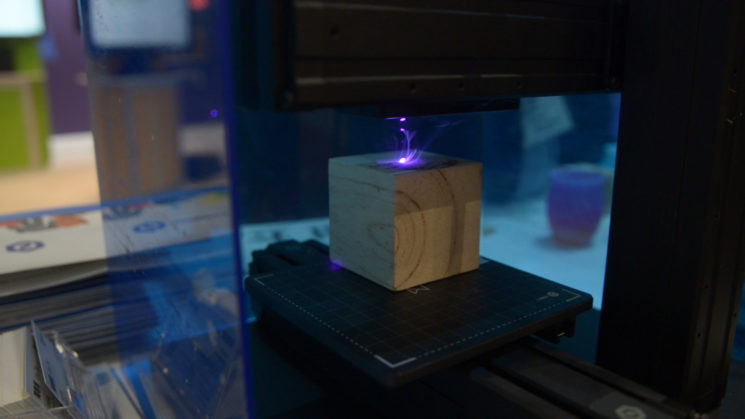 The build plate, though, while heated, is still quite small. You’re looking at a 130 x 130 x 130mm build volume, so you’re not going to be printing a life-size Jabba the Hutt on this thing. Instead, it’s more for smaller, more precision parts. It comes with a fairly standard 0.4mm diameter nozzle, but this can be swapped out if needed, with layer heights as low as 0.05mm. The Delta configuration of the printer also allows you to load up to seven filaments simultaneously for multicoloured prints. 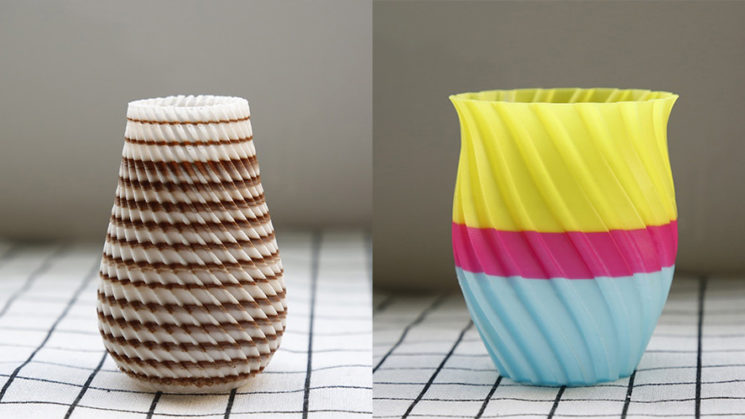 One feature I haven’t mentioned so far is how you actually get files onto the Mooz and how you control it. Like many 3D printers today, you have the choice of either a microSD card or USB connectivity straight to a computer. Control for the mooz is then provided either via a 3.5″ touchscreen LCD, or through software on your computer. The touchscreen LCD is much more advanced than those found on many 3D printers, though, resembling something more like a phone UI. It does make me wonder why they didn’t just give it Bluetooth capability and create an actual phone app, though. 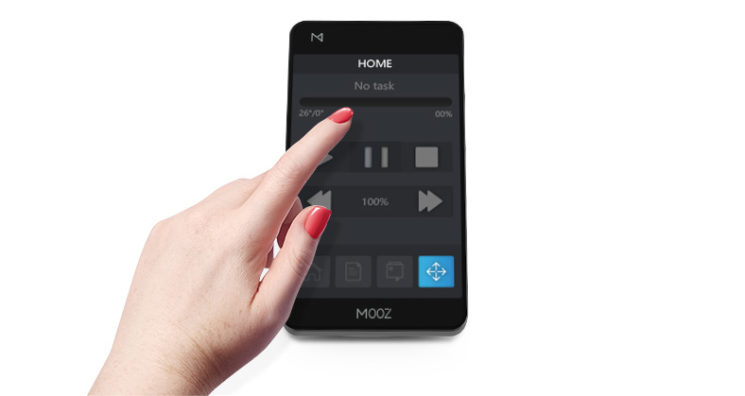 As this is a multifunction unit, the Mooz comes with its own Dobot Mooz Studio software. It’s a specially designed slicer software for laser engraving and CNC carving. For 3D printing, it is supplied with Cura and Slic3r. Firmware updates for the Mooz are also available to download through the Dobot website. And the firmware is regularly being updated in response to user feedback, so make sure to check back every now and then. 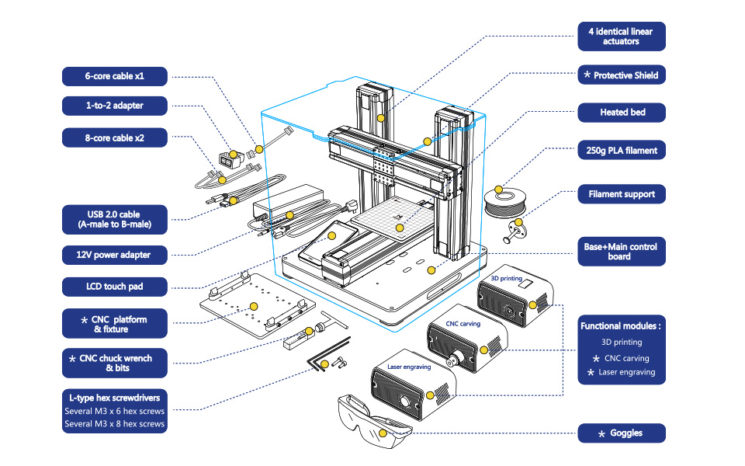 The modular design of the Dobot Mooz is an interesting move. It’s probably the first printer of its kind in this respect, at least it’s not something I’ve seen before – and no, DIY build kits don’t count. But this modular design does allow for the three different configurations. The Delta configuration is only really suited for 3D printing, particularly in vase mode. The single Z-axis Cartesian Mooz-2 mode will be good for either 3D printing or laser engraving. The dual Z-axis Mooz 3 mode is for when you want to use the CNC milling head or just want to take fewer chances with accuracy when 3D printing.

While the laser engraving and CNC milling facilities are definitely going to be a bonus for some users, I’m not sure they’d help me. I can already laser engrave with my Dobot magician, and CNC milling isn’t something I really need. For others, though, they’ll be big selling points for the Mooz. So, those aren’t so much a problem, as simply not of benefit to me. If you need those abilities, though, the Mooz does seem to perform rather well. All of the items I saw made by the Mooz at the BETT show looked great.

As far as 3D printing goes, yes, the build volume is a little on the small side. It would be nice if it was a touch bigger, say 200 x 200 x 200mm, but for many uses, the small volume isn’t going to be much of a problem. It hasn’t been one for me so far with the Dobot Magician which has a similar build volume. Sure, it’s nice to be able to print huge sometimes with something like a Creality CR-10, but unless you’re a 3D printing addict, you’re not usually going to need many items that large. Most items are quite small or are made up of smaller components that you glue together afterwards anyway.

With a footprint of only 285 x 285 x 318mm, the Dobot Mooz is small enough to fit on most desktops right next to a computer without getting in the way. But, it’s also large enough to still be able to give you some useful prints. So, if you’re looking for something to make battery holders, tethering cable clips, flash brackets, action camera mounts, or lens cap holders, the Mooz could be a great option for you.

For me, if I didn’t already have the Magician, I’d possibly consider this, it’s a small but versatile machine. But as I do, I think my needs are a little larger now. I do still need a 3D printer, even though the Magician does a good enough job for my requirements. But I also want something I can customise a little.

What can I say? I’m a tinkerer.

The Dobot Mooz is available to buy now in three varieties. For 3D printing alone, there’s the Mooz-1z, which contains the single Z-axis support for $559. The Mooz-2z contains dual Z-axis supports and is $699. The full Mooz system allows you to build the 1z, 2z and Delta configurations along with the laser engraving and CNC milling heads and costs $799.

The Dobot M1 is the maker’s best friend