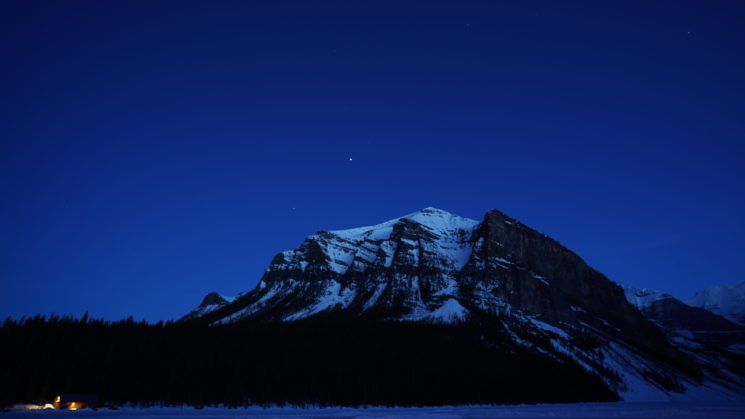 Last year I scored a really amazing gig. I had a two-week shoot for a tour company in the Canadian Rockies creating promotional content for their boutique medical conference. One of the best things about that gig was the chance to shoot some stunning sites out in the Banff National Park.

I wanted to try out my skills at nightscapes in some of the most stunning parts of the world to shoot them. The challenge though was that I had to be shooting the whole day from about 7am till 10pm or 11pm most nights.Then I would get back to my hotel room and have to back up cards, charge batteries and get everything ready for the next day. Needless to say, I didn’t have that much energy left to stay up all night shooting the stars most nights. But I wasn’t going to be deterred by a little thing like no energy! Instead, I tried to shoot out of the window of my hotel room.

This of course lead to some technical challenges and, if I do say so myself, some McGyver-like solutions.

Step two was to pick a lens. The two options I had with me were the Sony 10-18 f4 and the Zeiss Batis 18mm f2.8 (very kindly loaned to me by the local Zeiss distributor in Australia for the trip).

I actually tried both. I found that, on the few nights that I went outside to shoot, I preferred the faster Zeiss, but when I was shooting from my bedroom window, I preferred the Sony, simply because it gave me more options to go a bit wider or not. I was limited by where the window was and I couldn’t really walk around to change my composition so having more options with my lens helped massively.

I had tried this kind of shoot before so I knew that one of the biggest challenges for me was going to be reflections off of the window. You’ve got the light of the room bouncing off the window and then, as it gets brighter, if you’re waiting for the sunrise, you are going to get the light from outside too. There are a few ways you can try and cut down on the reflections.

To start with, you can get the camera lens as close as possible to the window and when I say close, you want them touching if you can. That’s where having a very “adaptable” tripod comes in handy. So my much loved and long abused 3Legged thing tripod got the chance to shine to get the camera and lens as close as possible. With the tripod doing some handy gymnastics bending to get there. Unfortunately, this wasn’t close enough and I was still getting lots of reflections from the room lights. So ,of course, the next step is to turn off the lights but there are still going to be some reflections even once you’ve turned off all the lights in your room.

If you have come prepared, you’ll also have a circular polarising filter. This is a filter designed to help you reduce glare and reflections when shooting into or through windows. I’ve found that I have mixed success with these. It could be that I am not using it correctly, but I’ve found that it kind of works, but not for really, really hard reflections.

So, when you’ve tried all these methods and you’re still getting reflections, what can you do?

You want to keep as much light that is behind the lens away from the lens. This is where I started to impersonate Richard Dean Anderson. I had to McGyver my way to a better image – no paperclips necessary. I took a black t-shirt that I had with me and I taped it around the lens and then onto the window, the idea being that it would block out as much reflective light as possible from the lens. It semi-worked. Because the lens was so wide I kept getting bits of the shirt in the image and I couldn’t shoot at 10mm but not the end of the world.

Also, no matter how much tape you think you’re going to need, put more on and then double up on that. I found that due to temperature differences between inside and outside the window, very often the tape would lose its “grip”

The first night I tried it and left a timelapse going overnight I woke up to find that the tape hadn’t held and so the T-shirt had fallen down. That never happened again as I just used loads more tape.

As for the results, it was mostly successful. There are still one of two small reflections that I can see if I look really closely, but most people would either not notice them or, if it’s a night sky you’re shooting, they would think it’s a light in the sky.

Once I got back from the shoot, I did some research and found out that someone has done a much better job of creating something that does what I need it. It’s called a lens skirt. It’s kind of like a little black skirt with suction cups on the bottom to attach it to a window and the narrow end goes over your lens. It comes in two sizes, I went for the large one (while my McGyver t-shirt worked, I was running out of tape).

It’s great for night shoots, but I have found that sometimes even on day shoots I can still get a reflection of the lens in the window if the day is really bright. Also you want to try and get the suction cups on the outside of them as the first time I used it and did some test shots I found I struggled to not get them in the shot too. Having said that it still the best solution that I’ve found so far for this “challenge”.

It’s still a great investment and means you don’t have to sacrifice one of your darker shirts for your photography habit. Have any of you tried shooting through windows and what solutions have you tried? Any other McGyvers out there?

A quick selection of the some the timelapses that came from this project. Some good and some, not so good.? 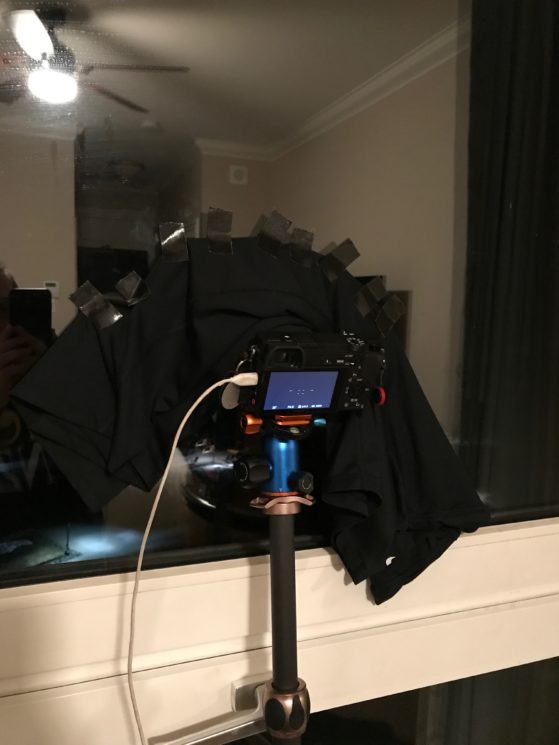 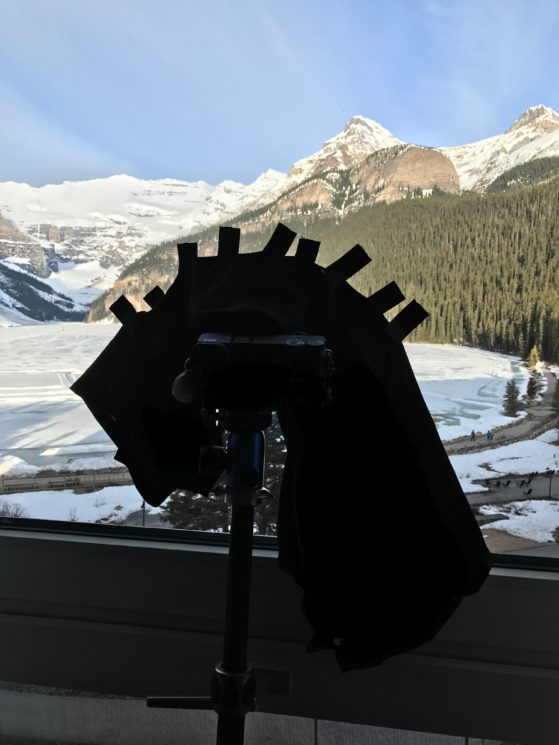 Quick Tip: Stay Dry While Shooting In The Rain

Tip: Shooting Fewer Frames Will Make You A Better Photographer

Here is my learning curve shooting the aurora; my tip: persistence pays

« The Dobot Mooz is a 3D printer, laser engraver and CNC milling machine
Elinchrom launches the ELB 500 TTL – Their most powerful portable TTL strobe ever »