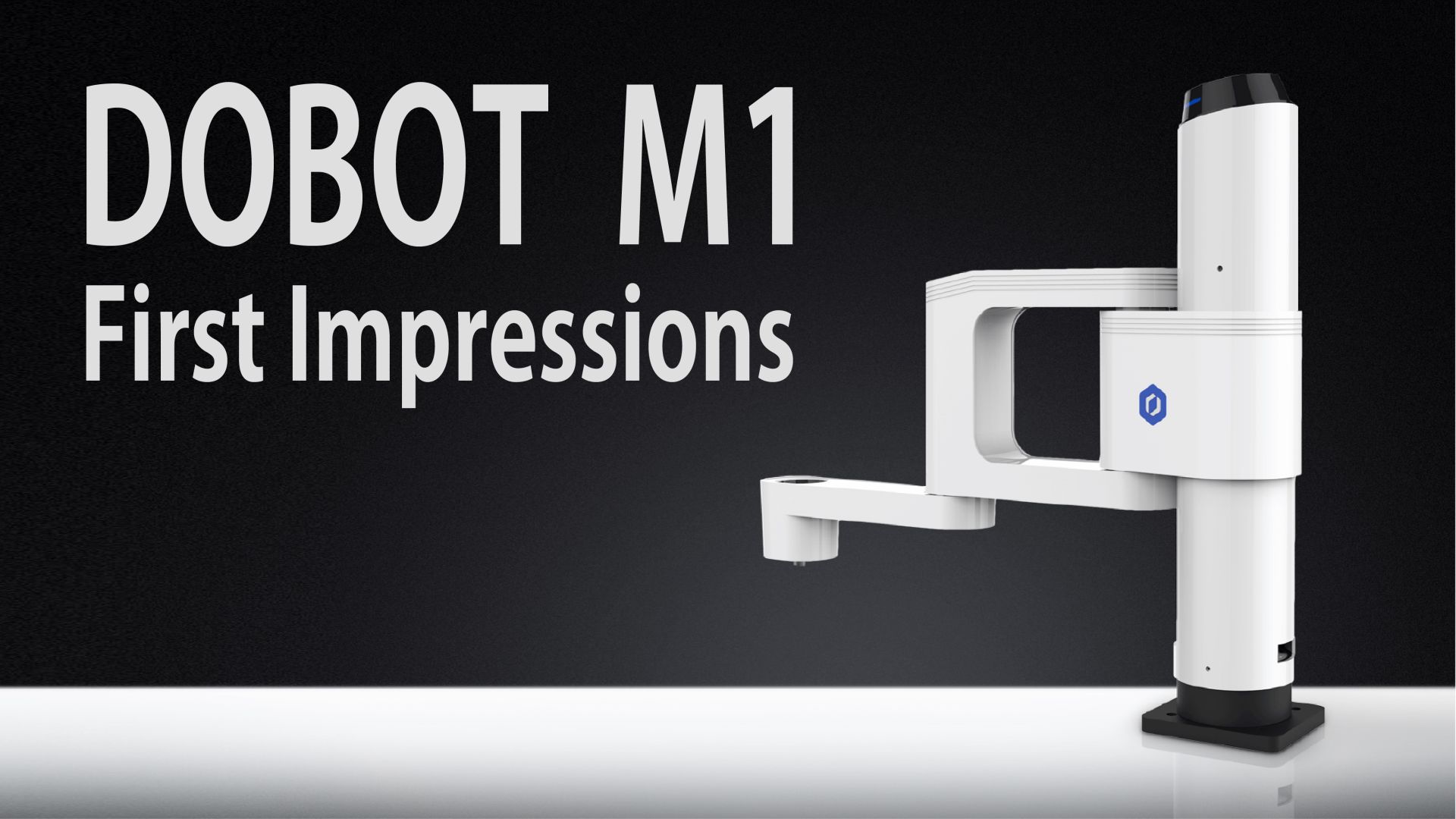 The arm is called the Dobot M1 and is curently a tad short of 300% funding on kickstarter. I would not necessarily call this a review. Think of it more as a hybrid between first impressions and a peek into the future.

What is the Dobot M1?

The M1 is a robotic arm, the kind you would see in huge car factories, only on a smaller scale. The next obvious question would be, what is a robotic arm. And the answer is quite simple. A Robotic arm is a set of connected bars that you control with a computer. You can place various heads on such an arm, like a 3d printing extruder, a suction cup, a gripper and just about anything that you can control.

The M1 is not a small toy that you would buy on Toys R US though. It’s 37 centimeters tall and has a reach of 40 centimeters. It’s big. Bigger than an average toddler. It’s kinda heavy too.

Specifically, the M1 can do quite a bit of tasks: 3D printing, soldering, drawing, act on visual cues, Laser engrave, and the team is checking SLA printing and light-weight CNC as well.

I spent two days at Dobots facilities and ran the robot through its paces. You can read the full report below, but in a nutshell, I was mightily impressed.

The M1 can do FDM 3D printing with PLA. It can print with one or two heads (which means either 2 colors, or one color and dissolvable support). The office is filled with impressive models, but I wanted to test this on my own. I tested this by making a cookie stamp. Sadly, the team did not let me bake, so I settled for play-doh stamping.

The M1 has no enclosure, so it is limited in the materials it can print. I am not sure, but it seems that PLA is the only workable material (maybe HIPS too). The flip side of this no-enclosure “problem” is that you can add another rail and ruin the M1 for as long as you want, to print truly huge models. (yea, that boat).

Also, unlike most printers, the robot is controlled by a computer, and is not independent. That means that you need a working computer to run and operate the robot. Our computer went into power saving and the result was an ugly bump on the top of my cookie cutting stamp.

Other than that though, the print quality was spot on and did not fall from the prints I make with my Flashforge printer.

For Slicing / G code generation we used simplify3d, which is quite standard, so if you are familiar with 3D printing, you should have no issues adapting.

I saw some of the more impressive engraving on the kickstarter page and wanted to test one for myself. While I 3D print quite a lot, laser engraving is new to me. It was far easier than I thought. All I needed is to plug the laser head in the M1 and place a photo inside the software.

I know that the M1 is capable of doing very fine details, but on our test, we missed the power and slightly overburned the leather. While this is not a good thing for my wallet (which is gorgeous now), it’s probably good to know that the head can throw a more powerful punch. I did ask if the Laser head can do aluminum and sadly it was not.

For a more customized operation you would probably not want to use a photo or gcode, you would want to tell the arm exactly where to go. There are several way of doing this. There are wrappers for just about any programming languages you can think of (C,C++,C#, python, Java, iOS, even a graphical language called blockify…). But where is the fun in that? There are two more exciting features for controlling the M1, hand-held teaching and using a 3D mouse.

Of course if you need something super precise, you can still do that boring programming thing (which I did not get a chance to try on this round). I did try to teach the M1 how to light paint a Pentagram. I failed poorly.

One thing to note, is that at least the version that I was looking at could only be taught on the X and Y Axis. I was not able to move it up or down.

This, I think is one of the more impressive features of the M1, and sadly I did not have any time to build a system myself. What I did have time to was to check one of the pre-made systems the Dobot team planned. It’s a simple test that can sort M&Ms into jars by color. This alone is a practical thing to have, but I can see many, many uses for the vision system combined with the arm. It uses the OpenCV SDK so if you have ever done image analysis with it, it should be a breeze.

As I mention in the video, the M! can do quite a bit. But does this plethora of capabilities comes at the expense of ease of use? I think that the balance is there. Swapping heads requires a bit of fiddling, but nothing a maker would blink about. Swapping heads (say from the suction cup to the Laser engraver), was fairly easy.

The software interface is ok. There is quite a lot to take in.

All and all, I think very highly of the M1. But there are a few things to note. The first thing, is probably, that there are only two M1 robotics arms in the world – the prototypes in Dobot offices. Between the fact that the robots are pretty rare, and my scheduling limits, there was only much I could do. I got the team’s for many of the time consuming tasks. This is why I am not really calling it a review. When I get a unit to play with for a few weeks, I can be more detailed, so things may be easier to accomplish with the arm, or harder, I can’t tell. That said, it was never took too long to comply with my weird requests.

The Dobot M1 can replace your 3D printer if you only print PLA, if you need to print ABS, you would still need a higher-ended 3D printed.

The M1 needs an attached computer to run. There is no set and forget. If you plan to use in an industrial environment, you would probably need a dedicated computer.

I think that if I had more time with the unit, I’d have more to say, I am quite picky. But from those hectic two days, there was really not many things I found on the bad side.

The basic dobot M1 kit can be pledged for $1,399 ($1,699 if you miss the early bird), for that price it’s a no-brainer. If you had to get all the different machines to perform what the arm is capable of, you would spend much-much more (and have half as much fun).

Testing the M1 kinda felt like being a kid in a candy store. I can see it as a great educational tool, especially combined with Blockify and the 3D printer. I know I’d like my kid’s school to have a couple of those.

The Dobot Mooz is a 3D printer, laser engraver and CNC milling machine

« Photographer tells off tourists who block his view while photographing an active volcano
Watch: A recording GoPro goes into a freezing liquid nitrogen tank »