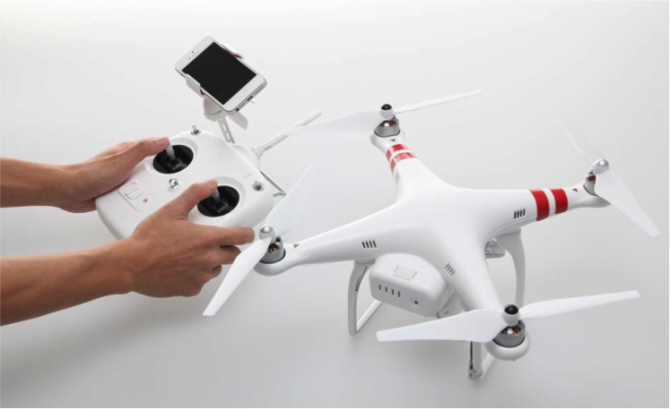 If you don’t know about devices like the DJI Phantom, then keep reading, because you may find yourself seriously considering investing in one afterwards.

DJI Phantom quadcopters are drones that take videos and photos from up in the air, like any basic helicopter shot you’ll see in movies. They’re effective, durable, and stay where they need to stay even if the wind is against them. And now the company is announcing their newest addition to the line: the Phantom Vision 2+.

Like the previous DJI Phantom 2, this drone will feature a 14 megapixel camera that can film 1080p at 30 fps. Where the Phantom Vision 2+ really improves is in how well it works: it’s claimed to be able to keep its position in the air at wind speeds of up to 25mph. Along with the stabilization it gets from that department, it’ll also have integrated in it a 3 axis stabilizer, which we’re guessing makes the experience all the better.

Another cool (or completely uncool) aspect that you’ll find of this model is the improvements in its GPS capabilities. Apparently, new safety features are installed into the drone that help ensure you don’t fly into restricted areas, where a flying drone may come off as a bit hostile to the people over there. Now we haven’t heard of a DJI Phantom having any run-ins with Area 51 just yet, but this takes us a bit closer to making sure events like Harlem don’t happen with other photographers. Maybe one day technology can be integrated that even warns of an accident in the vicinity, similar to how Google Maps handles traffic.

The video you record is video you’ll be able to see in real time: The Phantom Vision 2+ comes with an app on both iOS and Android that enables you to shoot and watch at the same time, and you can do that with the drone up to as much as 2,300 feet away from you. So what about when it’s that far away and the battery’s dying? Or what if you lose signal with it? You’re covered. The Phantom automatically enables a “Return to Home” feature where it returns to the home GPS spot that you establish for it beforehand.

Aside from that, the battery still comes in at 5200 mAh, which will give you 25 minutes of flying time already on a full charge.

The DJI Phantom Vision 2+ will come at just $100 over its predecessor, which makes sense. At $1299, you’re buying the ‘iPhone xS’ upgrade to the DJI Phantom Vision 2. We don’t know how well this device will perform on its promises, but we can see what the company’s already done through videos users upload all the time now. I posted one of my favorites earlier a while back.  And all of them make me think about going for it and buying one of these. The only caveat I did find is that I can not swap the built in camera with a go pro. What about you guys?