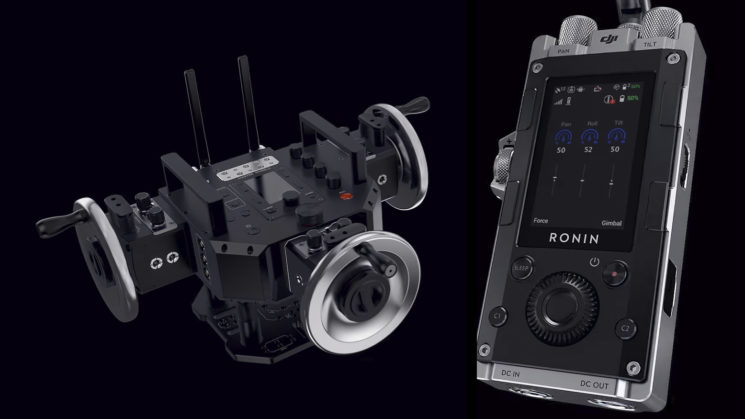 With NAB often comes new announcements from DJI. This year, there are two big ones for serious filmmakers. There’s the DJI Force Pro, offering full remote control and manoeuvrability over the Ronin 2, Ronin-S and other gimbals. Also announced today are the new DJI Master Wheels also offering remote gimbal control with high precision in a more traditional style cinema tool.

DJI have also confirmed that not only is there a new Apple ProRes RAW codec on the way, but that they’ll be the first to implement it, too. Coming to the DJI Zenmuse X7 camera, announced last October, ProRes RAW seems to be Apple’s new standard for RAW video adding to the current mix of RED, ARRI and CinemaDNG options. Of course, ProRes has a long lineage as an industry standard, so it may win out in the long term.

The idea of the DJI Force Pro isn’t new. Zhiyun, MOZA and others have remotes for their gimbals. But this one offers some pretty interesting options. Using something akin to magic (an embedded compass and high-precision IMU), the Force Pro senses the user’s movement and transfers it to the gimbal. With a latency delay as low as 10 milliseconds, this all happens at near real-time, too.

As for communication options, there are three. 2.4Ghz and 5.8Ghz wireless, capable of delivering your signals to a gimbal up to 3KM away, as well as wired. Having wireless control is very handy when you need to move around a large location on a long take, especially if the gimbal is mounted to a vehicle, for example. When in the studio, though, interference can often make 2.4Ghz and even 5.8Ghz signals unusable, so having the wired option as a backup is very useful (and the fastest way to go, as far as communication speed).

Control wheels for cameras have long been a staple of cinema. They’re the easiest way for a skilled camera operator to move a camera smoothly and precisely. And now you can control your Ronin 2, Ronin-S, or any other compatible gimbal this way, too. And, like the Force Pro, you can do it over 2.4Ghz or 5.8Ghz wifi, or through a cable.

It uses TB50 batteries, compatible with the Ronin 2 and Inspire 2, which offer up to 18 hours of operating time. These batteries also feature a built in self-heating function to allow them to work normally in temperatures as low as -20°C (-4°F). The main control console contains a bunch of 1/4-20 and 3/8-16 screw sockets for mounting monitors, video transmitters, etc, and those devices can be powered or charged from a CAN BUS port on the Master Wheels, too. It also features a Mitchell mount for attaching the base plate to tripods, cars, or whatever you need.

This one was actually announced a couple of days ago, but it was the weekend, and I was moving house, so wasn’t able to mention it. This seems like as good a place as any, though. Yes, that’s right, Apple has a new ProRes RAW codec on the way, and DJI will be the first hardware manufacturer to utilise it.

It’s coming in May to the Zenmuse X7 camera through a free firmware update. An update is also on the way offering 14Bit CinemaDNG in April. But, to get either ProRes RAW or 14Bit CinemaDNG support, you need to have purchased the CinemaDNG license. An update will also add exFAT filesystem support to allow for larger (up to 32GB) file sizes.

It’s quite incredible how far DJI have come in just a few short years. The company was only founded 12 years ago. Even as recently as five years ago, when the first Phantom was released, very few people outside of China had heard their name. I’m looking forward to see where they stand 5 years from now.

« Leica goes wide with SL zoom lenses: Super-Vario-Elmar-SL 16-35 f/3.5–4.5 ASPH officially announced
This video lets you see inside Kodak factory and learn how film is made »