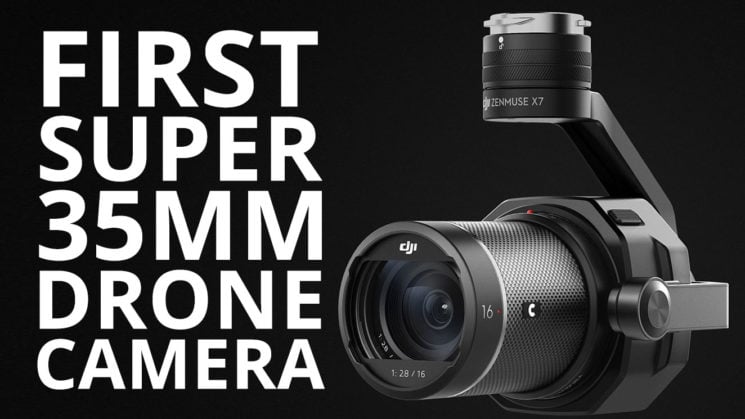 For aerial photographers, it’s also capable of capturing 24 megapixel RAW stills. Super 35mm means it’s an APS-C sized sensor. Currently, it’s only compatible with the DJI Inspire 2 drone, although future compatibility with other products is expected in the future. I wouldn’t get your hopes up about bolting this thing to a Mavic, though.

When DJI released the DJI Inspire 2, we were also brought the Xenmuse X5S camera. DJI were stepping up their game with a rather quality micro four thirds sensor that produced 5.2K video. Now, they’re raising the bar again with the X7 and a Super 35mm (APS-C) sized sensor, and 6K 30fps CinemaDNG Raw video and 24MP stills. It’s also capable of producing 3.9K footage at up to 60fps.

The much larger sensor has an ISO range of 100-25,600 and 14 stops of dynamic range. Four new DL mount lenses are available to go along with the camera in 16mm, 24mm, 35mm and 50mm focal lengths. Nobody likes to see more proprietary lens mounts, but it’s not like you’d want to Canon mount cinema lenses on this thing anyway, even if you could. 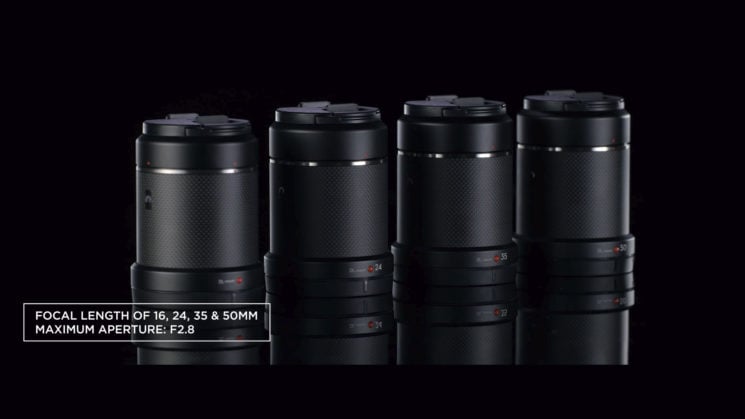 The new mount, DJI say, allows them to shorten the flange distance, resulting in much smaller and lighter lenses for drone use. They’re also made of carbon fibre to further decrease the weight. The 16mm lens comes with a built in ND filter. The 24mm, 35mm and 50mm lenses are equipped with leaf shutters supporting shutter speeds up to 1/1000th of a second. 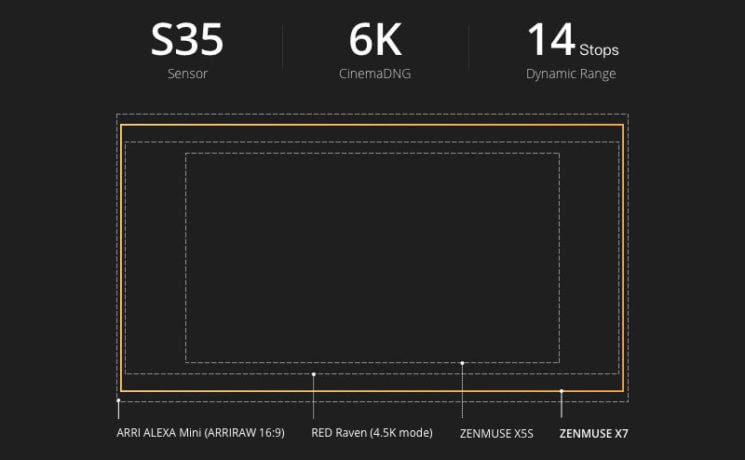 The new DJI Cinema Color System being introduced with the X7 is also compatible with the X5S camera. So, existing owners will get a nice little present in a future firmware upgrade. The improved D-Log gamma curve and D-Gamut colour space should help to maximise the dynamic range and sensor capabilities of the camera you already have.

The pricing is a little interesting.

Total price, $7,795. But, you can buy the camera and all four lenses as a single bundle for a mere $4,299. The Zenmuse X7 will start to ship in November 2017 from the DJI store and authorised dealers around the world.

There’s no word yet on whether there will be an Inspire 2 & Zenmuse X7 bundle.

It’s quite exciting just how far the world of aerial cinematography has gotten in just a few years. A decade ago, this kind of thing wouldn’t even be considered possible. Now, it’s almost demanded.

« An alphabet photography challenge changed the way I shoot
Nokia cancels Ozo VR camera, will lay off up to 30% of staff »