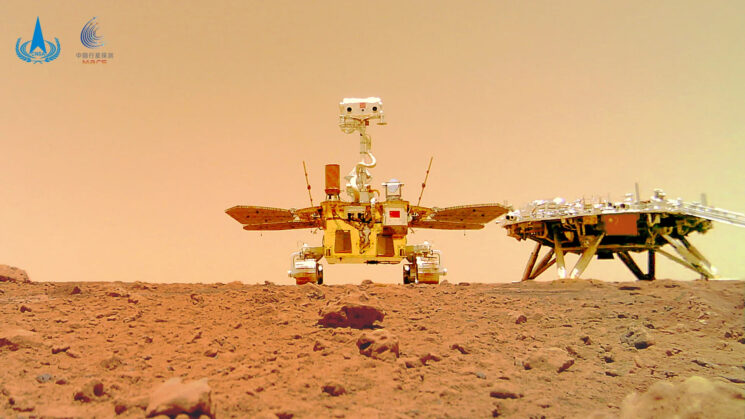 China’s Mars rover Zhurong arrived at the Red Planet last month. It has already sent some photos back to Earth, but we all know that selfies are a must when you visit a new place. So, the rover recently also sent back its very first selfie.

The China National Space Administration (CNSA) launched Zhurong on 23 July 2020. It made a successful landing on 15 May 2021 and it should stay up and running for at least 90 Martian days, according to CGTN.

The lander carrying China's first Mars rover #Zhurong has touched down on the Red Planet, the China National Space Administration confirmed on Saturday morning. Zhurong has been designed to operate in the Red Planet for at least 90 Martian days.

In the photo above, you can see Zhurong posing next to its landing platform. Unlike Perseverance and Curiosity, the Chinese rover didn’t use its own arm to take the shot. Instead, it relied on a small wireless camera that it placed on the surface before lining up for the shot with the platform.

In addition to the selfie, there are a few more photos that Zhurong took on Mars. They are all shown in this blog post that CNSA recently published. But since I can’t open most of them for some reason, I leave you with a Twitter thread that also contains them in case you experience the same problem.

So, Zhurong went and placed a remote camera on the ground and then went back towards the lander for this group photo in Utopia Planitia, Chinese flags lined up and all. Quite the effort. [CNSA/PEC] pic.twitter.com/tvx2mnaLNh

Of course, Zhurong’s primary goal is to study the climate and geology of Mars. But why not snap some selfies while it’s there, right? I mean, if Perseverance and Curiosity can do it, why wouldn’t Zhurong brag about its historic trip to its robot friends on robot Instagram? :)