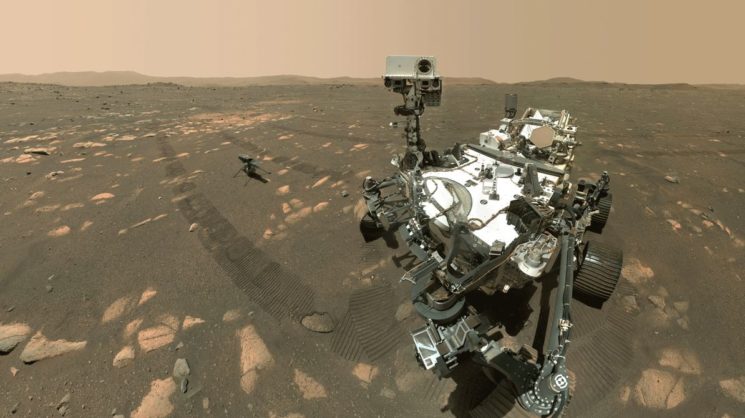 A month and a half after sending its first-ever photo of Mars, NASA’s Perseverance rover has just sent in its very first selfie. It shows the rover in the Jezero crater, but there’s also his little buddy Ingenuity helicopter posing for a snap.

The photo was taken about 13 feet (3.9 meters) from the rover by the WATSON camera on the SHERLOC instrument, located at the end of the rover’s long robotic arm. If you’re curious, “WATSON” stands for Wide Angle Topographic Sensor for Operations and eNgineering, and “SHERLOC” is short for Scanning Habitable Environments with Raman and Luminescence for Organics and Chemicals. Quite clever.

The photo was taken on 6 April, and we see two images that NASA joined in a GIF. However, they were made up of 62 individual images stitched together. NASA explains that the Curiosity rover takes selfies the same way by using a camera on its robotic arm. Speaking of Curiosity, check out this “tourist selfie” it took the other day.

Of course, Perseverance, Curiosity, and Ingenuity are all so much more than selfie-taking robots, we all know that. They send us valuable data about Mars that help scientists explore and understand this planet better. In fact, Perseverance should even pave the way for human explorations of the planet.

I don’t know what it is about rover selfies that I find so darn interesting. It could be because they remind me of WALL-E. Whatever it is, I love seeing these selfies and imagining that the robots are having fun exploring, and taking selfies as humans do. Of course, it’s just my imagination, but I’m glad I still have that childish side of me who can think this way.

If you’d like to learn more about Perseverance, Ingenuity, and their selfie, make sure to visit NASA’s website. And check out the video below to learn how rovers take selfies.