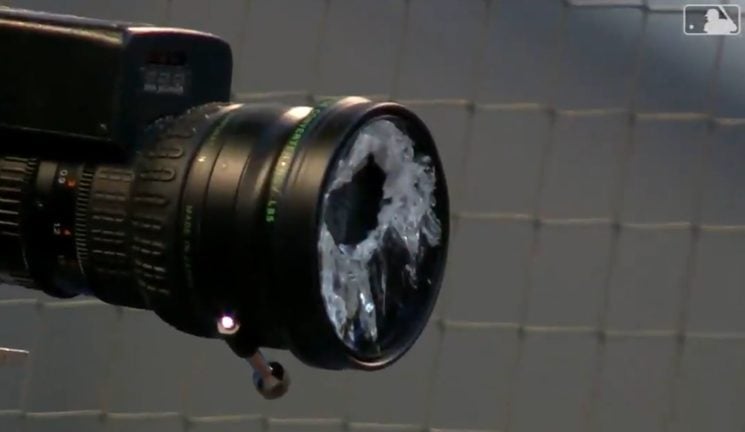 Incidents happen in sport in a blink of an eye. And it took precisely that long to leave this photographer with a lens smashed into pieces. Professional baseball player Tyler O’Neill sent a foul ball straight into his lens, and it was caught on the very camera that got hit.

O’Neill of the St. Louis Cardinals hit the ball against Miami Marlins pitcher Sandy Alcantara. The ball traveled 90mph (145kph) straight into the lens of the cameraman behind Alcantara. The incident was captured with a few cameras, including the one that got broken.

DPReview writes that the smashed front element is a Fujinon WCV-L85 0.8x Wide Angle Converter lens, attached to the front of a Fujinon UA18x7.6BERD broadcast zoom lens. Thankfully, it wasn’t the lens itself that got broken, because it would cost nearly $22,500 to buy a new one. Still, I said “ouch!” out loud when I saw this video.

Sports photographers sometimes have their gear hit, they get knocked over, or even knocked unconscious while doing their job. I guess they could still take photos with a scratched lens if it’s not completely shattered, but this is still the only good way to smash a lens. After all, I believe that everything is alright if only the gear is damaged, as long as people stay unharmed.