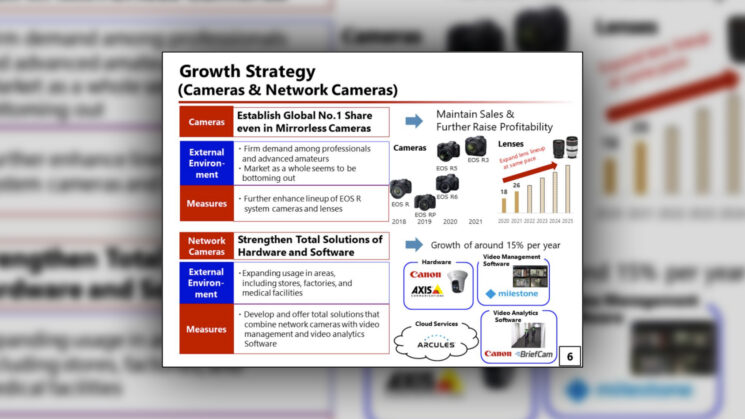 Canon recently published its annual financial results and presentation for 2022. In it, Canon Chairman & CEO, Fujio Mitarai talks about the effect of the pandemic on sales and how they’ve been dealing with them. Despite the pandemic still putting pressure on sales, as a result of shutting down production facilities, parts shortages and logistical constraints, they managed to “significantly exceed” Canon’s pre-pandemic profit level in 2019.

He also talks about last year’s reorganisation that aided in this profit boost as well as where things go from here, including the potential release of 32 new lenses by 2016. This is extrapolated out based on the fact that Canon wants to “expand lens lineup at same pace” as previous years. In 2020, there were 18 RF lenses and in 2021 there were 26. 8 lenses per year for four years, is 32 lenses.

Interestingly, while the camera market is continuing to shrink, Canon says this seems to be primarily at the lower end with entry-level bodies. In contrast, they say, the demand for higher-end cameras aimed at professionals and advanced amateurs who want higher quality results and more control over their images remains pretty strong.

Canon also remains committed to getting that number one sales spot, and as well as expanding their market share, they plan to continue expanding their lineup “in response to user feedback”. Whether they’re just talking about the lens lineup, that the slide at the top of this page suggests, or they’re talking about camera bodies, too, isn’t mentioned, but one would hope that they’re including cameras in that statement. After all, we’re still waiting for that Canon EOS R1 mirrorless flagship, not to mention a true mirrorless alternative to the Canon EOS 7D Mark II (which was released eight years ago and has long since been discontinued).

But, what is quite clear is that 8 new lenses were released in 2021 and Canon plans to keep growing their lens offerings at the same rate until at least 2025. With 8 lenses per year, that means 32 over the next four years. And we’ve already seen two of those knocked off the list this year with the new 800mm f/5.6 and 1200mm f/8 L IS USM lenses (even if they can’t deliver them yet). I wouldn’t take 32 as a hard solid number but it’s a decent goal. And there are still a few holes in the lineup – and will be even more if Canon makes good on the rumours and brings APS-C to RF mount.

Despite the lower end entry-level cameras taking a bit of a dip in sales, Canon hasn’t given up on the general consumer market and cites the Canon PowerShot Pick along with the impending mass-production of its SPAD sensors by the end of this year, “which can take color images with excellent color reproducibility even in the dark” to be used in “various applications” – I wouldn’t expect them to come to mirrorless cameras any time soon, though. Canon says they’ll also be working on its in-vehicle camera systems.

It will be interesting to see how well Canon’s plan plays out over the next four years to see if they manage to keep up with their goals. Given the profit growth that Canon’s claimed over the last year while still in the middle of a global pandemic, though, it does give some hope and confidence that they might just be able to do it.