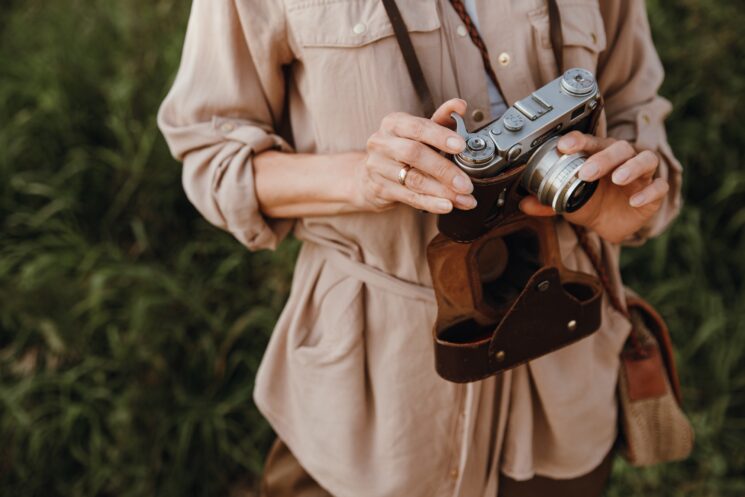 Ever since Anna Atkins‘ first experiments in botanical cyanotypes in the late 1700s, women have been involved in photography. It’s easy to name several influential women who unarguably had a big impact on the photography industry, Annie Liebovitz, Dorothea Lange, Sally Mann, and Tina Modotti, amongst others.

Gertrud was a student of the German Bauhaus school where she was initially exposed to photography. She married an architect and became a mother to two children. To help stave off the boredom of being a stay at home mother, she created her own darkroom in the family bathroom and experimented with self-portraiture. The majority of these images were taken between 1926 and 1932 and form part of a series that she titled “Maskenportraits”. This series was never publicly exhibited until 1979, however, Gertrud is considered to be a major pioneer of the self-portrait.

Winifred was born in Jamaica but moved to New York City when she was 18 where she attended the New York Institute of Photography. Her work explored the role of African Americans within professional and social realms and her identity enabled her to photograph and document the communities of Harlem during the Great Depression and subsequent ‘Harlem Renaissance’. Allen made a living from photography in the 1930s and 1940s working as a portrait photographer. Her documentation of birthday parties, weddings, club celebrations, as well as a variety of other social occasions brought further attention to the realities of Harlem society.

The American photographer Renée Jacobs is perhaps most well known for her images of the female nude. She began as a photo-journalist working for publications such as The New York Times and the Philadelphia Enquirer but gave that up in favour of studying law. She rapidly became disillusioned and took up photography again as a means of escape, and found herself photographing the female form. In 2006 she won the International Photography Award for fine art nude. Her work is important because it embodies a different perspective on female nudity and sexuality, allowing the viewer to witness something different from the centuries-old male gaze that we are so familiar with across the Western history of art.

You may have heard about the American photographer Vivian Maier already. Her work wasn’t discovered until after her death when the contents of her storage facility were auctioned and found to be full of her prints and undeveloped film. She spent most of her life working as a nanny in Chicago, and her work is largely street photography documenting the everyday life around her. She developed very few rolls of film, although photographed prodigiously, the process of photographing being significantly more important to her than the outcome.

Hungarian-born photographer Kati Horna is probably most renowned for her work covering the Spanish civil war in the late 1930s. At that time she was incredibly influential and developed a way of depicting the civil war as seen through the impact on women and children. This ‘gendered witnessing’ was perhaps the first time that war was depicted in this way, and her behind the scenes depictions of women and children living through war changed the way the world reacted.

Horna later moved to Mexico where she spent the rest of her life, working for prestigious publications, lecturing at the university and exploring other avenues of photography and exhibiting work.

Now we can’t have a list of amazing photographers without including at least one contemporary woman photographer who is doing extraordinary work. So here’s a bonus:

Newsha is an Iranian photojournalist and art photographer and has published in magazines such as Time, The New York Times, and National Geographic. Newsha Tavakolian is known for her powerful work covering wars in Iraq and social issues in her native Iran. Tavakolian has photographed female guerilla fighters in Iraqi Kurdistan, Syria and Colombia, prohibited Iranian female singers and the lives of people living under sanctions.

Of course, these are but a handful of many talented and dedicated women photographers. Which female photographers would you celebrate on International Women’s Day?