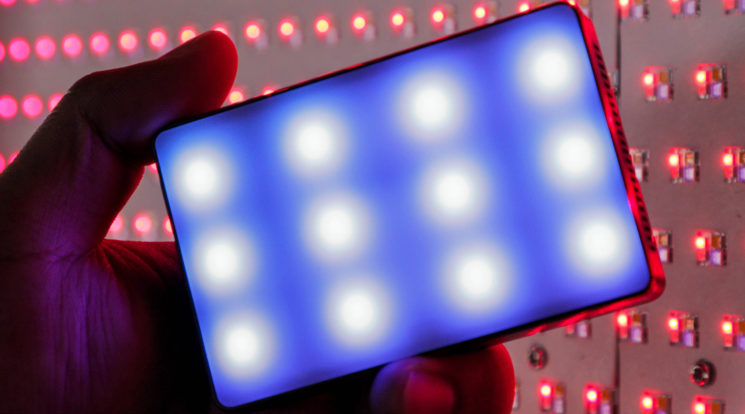 Aputure has announced the release of the new Aputure MC RGBWW LED light. It’s the first RGB light to be released by Aputure, first shown off at NAB 2019 earlier this year. It offers full control over hue, saturation and intensity, but it also features white LED lights, too, offering a bicolour range from 3200K to 6500K with a CRI/TLCI of 96+.

The Aputure MC is a small light, as you can see from the video thumbnail above, fitting into the palm of your hand with ease. It offers tungsten and daylight balanced LEDs as well as full hue control over RGB LEDs providing up to 95% of the BT 2020 colour gamut. The light has a 1/4-20″ threaded socket for mounting, or you can attach it to metal objects through the use of built-in magnets.

One interesting feature of the app is that it allows you to point your phone’s camera at a colour, capture it, and then it’ll tell the Aputure MC to replicate that colour. Of course, this will depend on how good the light sources are illuminating that colour and the accuracy of your phone’s camera.

You’re able to control up to 100 lights in the Sidius Mesh network from a single Sidius Link mobile app. You can control them all at once or address them individually and can extend up to 1,300ft (400 metres) with a max range of 262ft (80 metres) between compatible lights. We’ve seen similar mesh technology mentioned recently in the Lightcore LED light, too. It looks to be a great option for controlling many devices from a single smartphone, working on a sort of peer-to-peer network type of principle.

I would not expect the two brands to be interchangeable with each other, though. Likely each brand’s own mesh network uses a proprietary communication protocol. It would be nice if there were an open mesh protocol for LED lights, though, if this starts to become more common. Sort of a mesh version of DMX.

The Aputure MC RGBWW LED light is available to buy now for $90. You can find out more about it on the Aputure website.

The LitraStudio is a powerful, rugged RGBWW LED light you can take underwater

« Photographer photoshops bride without her knowledge to make her look skinnier, claims that he deleted original photos
Blackmagic update for the Pocket 4K adds anamorphic lens support and USB control »