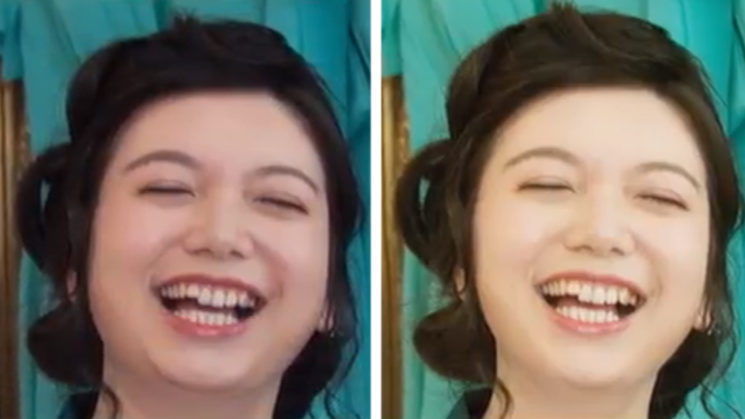 I think that choosing to get married is one of the most important decisions in your life. And choosing the right photographer to document this day is certainly a big decision, too. Sadly, there are many unprofessional photographers out there who can ruin your big day. This happened to a New Zealand couple, who got unpleasantly surprised after seeing their wedding photos. The bride was photoshopped to look skinnier, and when they asked for the original files – the photographer claimed that he deleted them.

Andrew and Irene Leathwick got married last November. They hired photographer Mike Sheng to shoot their wedding and they say they paid him $4,000 NZD ($2,500 USD) for his work. In an interview with TVNZ’s Fair Go, the couple said that they chose Sheng after viewing the gorgeous photos on his website. Irene said that, on the wedding day, everything went as planned. “He was really, really professional. He knew exactly what shots he wanted,” she told TVNZ. “He knew exactly how to talk to us into acting natural — everything a photographer should do.”

However, the unpleasant surprise came after the photographer delivered the final selection of photos. While he left Andrew largely untouched, Irene was heavily photoshopped.  Her face and arms were made slimmer, her chest was made smaller and sunken in, and her waist was pulled in. The problem is that they’d never discussed this with the photographer. Either of them hadn’t wanted to have their physical appearance changed in the wedding photos, yet Shang did it without consulting them.

The couple contacted the photographer, asking for the original images from the wedding. They say that it was even a part of the contrast. However, the photographer reportedly said that he had deleted the original files, so he couldn’t send them to the couple. They then requested him to “un-retouch” the images.

The couple claims that he wasn’t happy about it, as it would “take a long time” to do it and “he had a lot of other clients.” The couple then asked him to undo just two of the photos, which he did. But later, he reportedly blocked them from contacting him further. TVNZ’s Fair Go says that they contacted him for a comment, but they also never heard back.

The Leathwicks say that they’re considering court action against Shang. They want to at least get their money back and try and get new photos taken.

On the one hand, I think this is a major misunderstanding and a serious lack of communication. In the world where photoshopped and fake photos are pretty much a standard, it’s important to remember that not everyone wants them. As a photographer, you should discuss this matter with your clients. And as a client, you should note it to the photographer if you don’t want your photos heavily retouched, just in case. I think you should even add this clause to the contract. But on the other hand, what kind of photographer deletes original files? Especially if they’re included in the contract?

Anyways, if you photograph people (at weddings or any other occasions), remember that communication is key. Discuss everything with your clients and make clear arrangements. If you’re not sure about something, feel free to ask them. And while you’re retouching images, have the “ten-second rule” in mind and remember: “you should make people look as beautiful in the photo as they were while you were looking at them.”