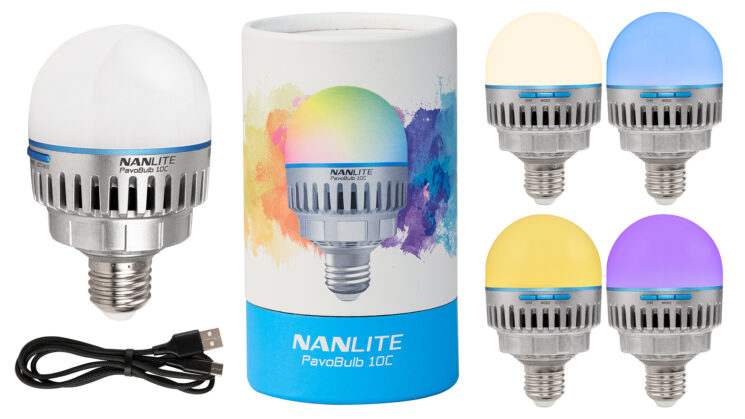 Nanlite has released their new PavoBulb 10C. It’s an RGBWW colour-mixing LED light designed to replace practical bulbs on-set when you need to get a little more control over how they look to camera. With the plethora of dodgy cheap consumer CCFL and LED bulbs on the market these days that people often use in their homes and businesses, these will be a welcome tool in the arsenal of filmmakers.

It is essentially Nanlite’s answer to the Aputure Accent B7C, released in September 2020, but for the Nanlite ecosystem, offering remote control through the NanLink app and a variety of other methods. It offers a CRI of 95, a TLCI of 97, over 36,000 colours with 15 customisable preset modes and a slew of other features.

As well as smartphone app control, they can also be controlled over DMX, 2.4Ghz, wire control or buttons on the unit itself. Like the Aputure Accent B7C, it’s an E27 screw-type socket – there’s no mention of a bayonet mount version, but as I’ve said before, adapters are easy enough to find if you need them – and can be powered either using that screw socket, although there’s no mention of voltage in any of the specs I’ve found. Hopefully, it’ll run 110-240v so that it can be used everywhere. Unlike the Aputure Accent B7c, however, it has no built-in battery. But it can also be powered over USB from a power bank or other USB power source.

The Nanlite PavoBulb 10C RGBWW bulb provides a bi-colour range of 2700K to 7500K with claimed CRI and TLCI of 95 and 97 respectively. The RGB side of things gives you the choice of 36,000 colours and you also get 15 customisable built-in effect modes. A number of accessories have been released along with the light, including a splitter cable to add DMX male and female connectors, as well as a USB passthrough so that you can power it over USB while controlling it remotely. 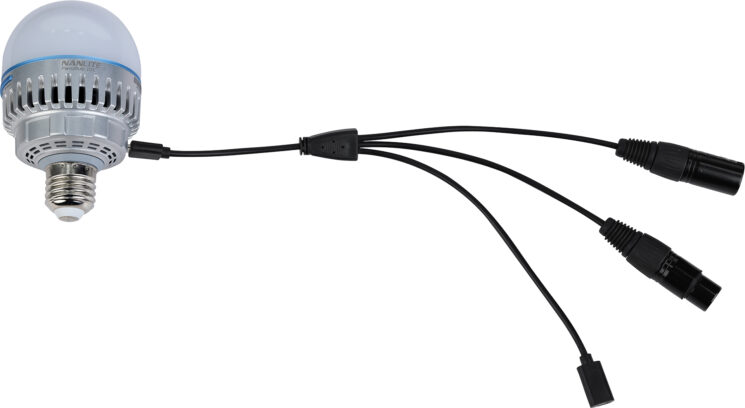 Other accessories include a suction cup bouncer to help direct the light it puts out, a magnetic mount & AC adapter and an NP-F battery adapter. The PavoBulb 10C is also available in several different packages. You can buy just a single light on its own, that comes with a USB cable or you can buy it in packs of four or twelve lights as a kit that each come with their own hard case and a bunch of the accessories that would otherwise be optional if you get the single light on its own. Selling in kits is logical, and something Aputure does with the Accent B7C, too, but Nanlite has a couple of extra options.

It’ll be interesting to see how these two lights compare with each other once they start getting in the hands of users.

The LitraStudio is a powerful, rugged RGBWW LED light you can take underwater