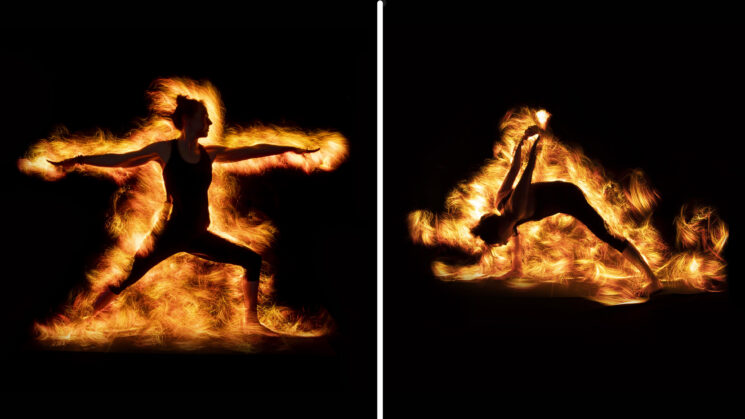 When you see photos of people doing yoga, they usually radiate peace and calmness… Or at least try to. But light painter and photographer Jason D. Page has decided to do something different – and I absolutely love it! So, I reached out to Jason to hear more about this project.

Jason teamed up with yoga instructor Gina Buse and the duo created a set of yoga photos that are completely out of the box. They’re fierce and powerful, and it’s exactly what you need to be to pull off many of the yoga poses. And in Jason’s recognizable fashion – he shot them as single, in-camera photos.

If you’re into light painting, I’m pretty sure you’ve heard of Jason, his creative work, and his Light Painting Brushes. So, when Gina approached him for collaboration, this is the approach he had in mind. Gina needed some new images to use for her marketing materials so Jason light-painted fiery silhouettes of the Warrior yoga poses.

Jason shared with me why they chose the Warrior poses, and the project made even more sense.

“The Warrior Yoga Poses are named after the legendary warrior Virbhadra,” Jason explains, “and this set of poses is yoga’s most popular, and perhaps most useful, group of postures.” It’s worth noting that it takes some serious strength and balance to hold these poses. Now imagine doing it for about a minute. Multiple times. In the dark. While someone is waving lights all around you. In other words, I think Gina is a serious bad**s and the resulting photos show her as such. 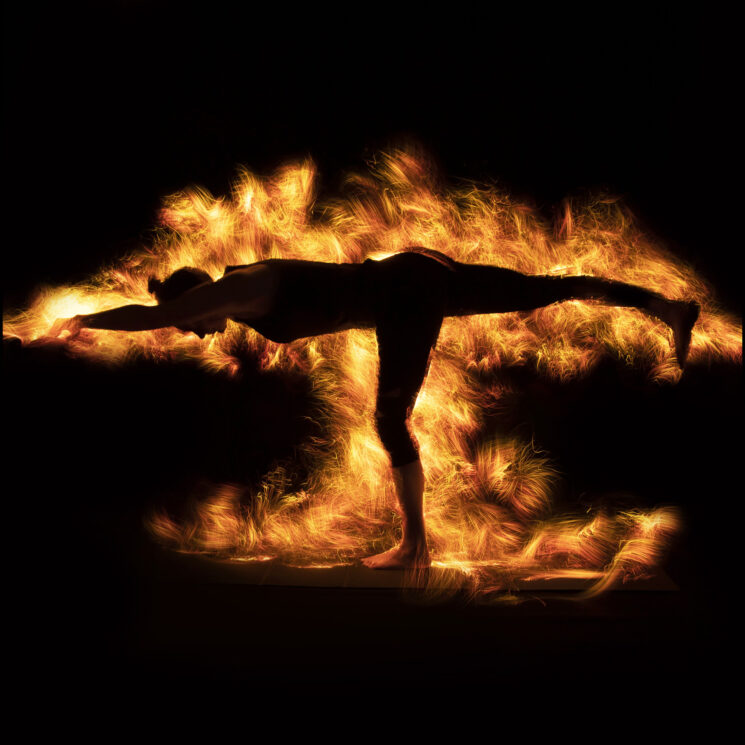 If you’re wondering about the gear, it was a pretty simple setup: a Canon 6D Mark II with a Sigma 24-105mm lens sitting on a tripod. As for the light painting tools, Jason used the Black Fiber Optic with a DIY Screw-on Color Filter From Light Painting Brushes. He put some red, orange, and yellow gels inside the screw-on filter to create the color for the fire. To illuminate the Black Fiber Optic, he used the Soonfire MX66 flashlight attached via the Light Painting Brushes Universal Connector.

As for the camera settings, all these photos were taken at ISO 200, f/7.1 in bulb mode, with the exposure time ranging between 40 and 60 seconds. Imagine holding at least one of these poses for that long.

“The process to create these images was relatively simple,” Jason tells DIYP.

“To focus, I had a mark on the ground where Gina placed her yoga mat and I manually focused on her. After I pulled focus I left the lens on manual focus. Because the lens was left on manual focus I knew the focus would be good to go when the lights went out as long as Gina was in the same spot. We went over a few of the poses with the lights on and I showed Gina the process of how I would be Light Painting her once we turned off the lights. We decided it would be best to Light Paint the more difficult poses first and work our way to the easier poses to hold as her muscles got fatigued.”

Jason even explains what the light painting process looked like, in case you want to try it yourself:

“I turned the lights out and started the exposure. To create the fiery effect, I waved the Black Fiber Optic around behind Gina to create a silhouette of her body in the warrior pose. I also selectively brought the Fiber Optic in front of her, especially around the ground, to give the illusion of her rising up out of the flames.  I Light Painted Gina in each of the poses several different times to get the look that we were after.”

As I mentioned, it’s hard for me to imagine holding any of these poses for longer than 10 seconds. And Jason confirms that it was a wise decision to start the shoot with the more difficult poses. “I tried to hold some of these poses myself while we were shooting and failed miserably,” he says. “After this shoot, I have an even greater respect for the strength and balance that it takes to hold these poses.” I sure do as well!

If you’ve ever done yoga, you know that it’s not just about breathing and relaxing. In fact, it takes some serious balance and strength for some of the exercises. So, I’m quite thrilled to see a set of photos that puts an emphasis. I love finally seeing fiery and badass yoga photos not just because it’s different – but to me, it makes so much sense.

Make sure to check out more of Jason’s fantastic work on Facebook, Instagram, and his YouTube channel, and check out the Light Painting Brushes if you want to give light painting a shot yourself. 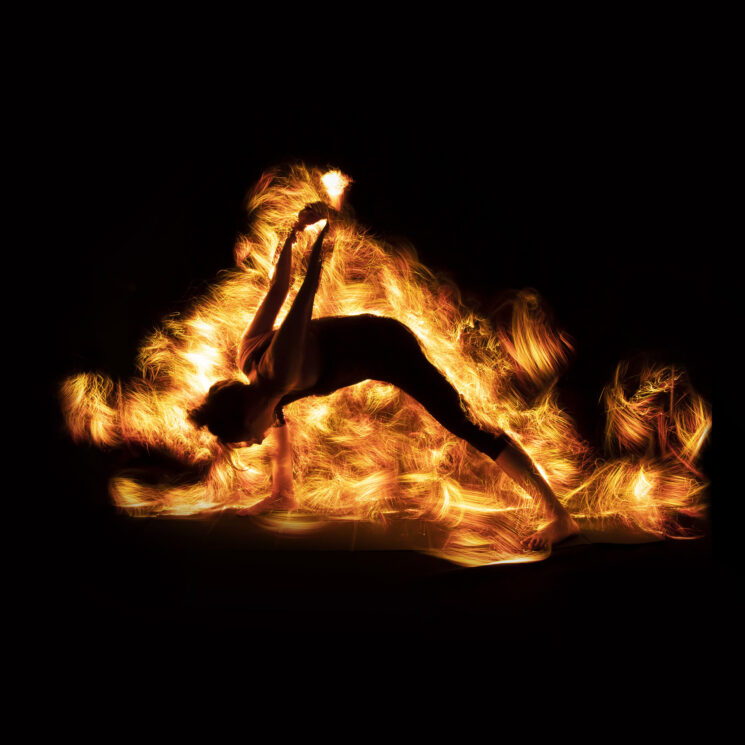 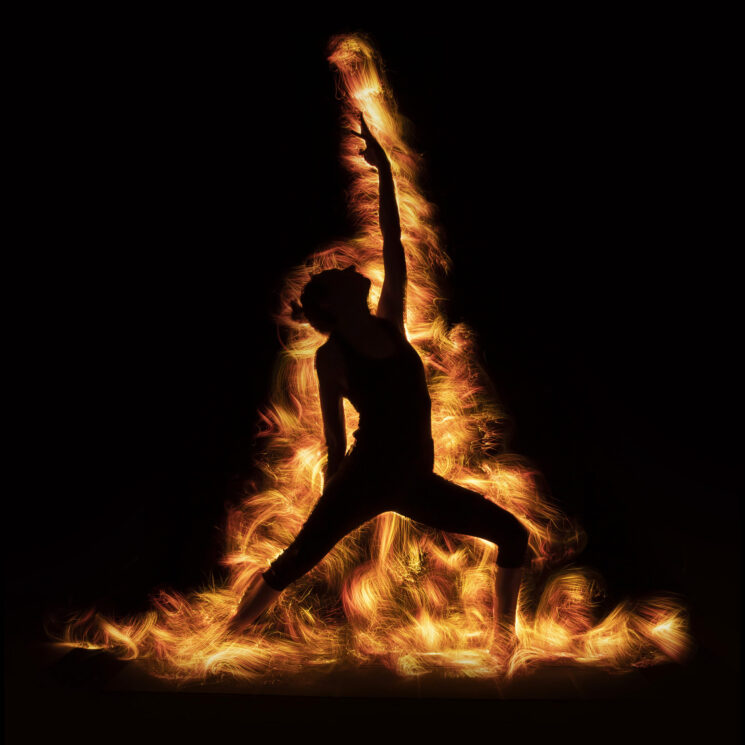 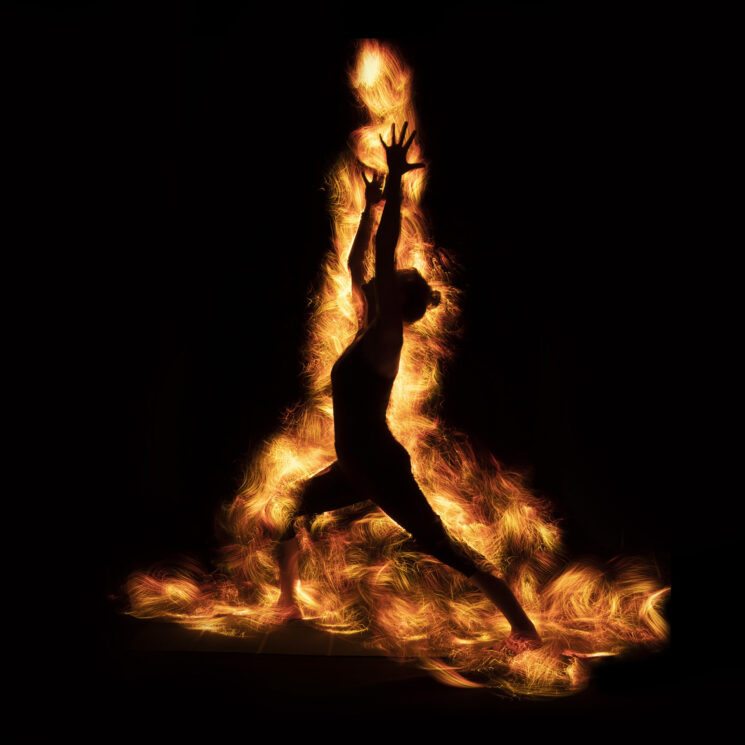 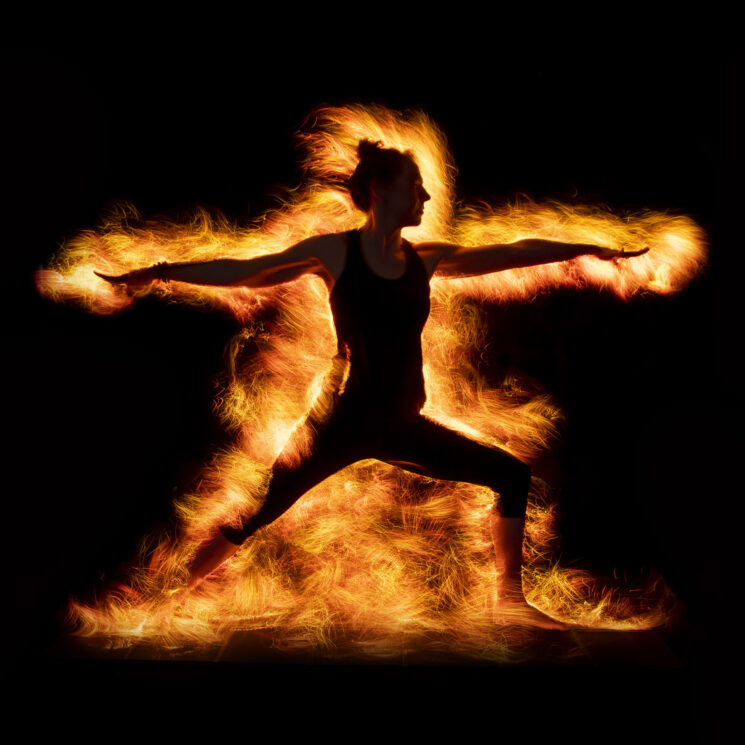