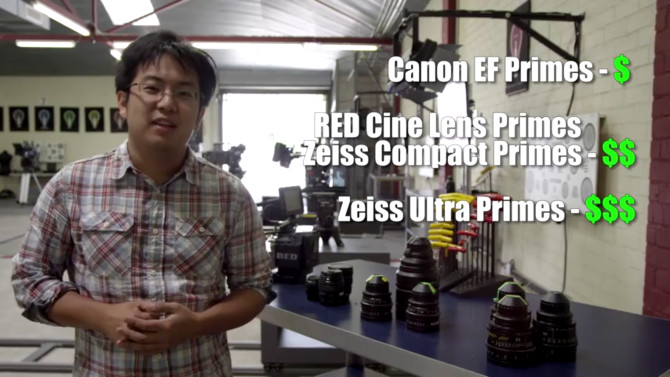 Got any projects on hold until you get that dream lens? Convinced your current gear isn’t good enough for the task?

As can be seen in the lens test created by Freddie and the gang over at RocketJump Film School, you may be wasting your time – and money.

Don’t expect to see focus charts (not as they were intended to be used, anyway), as this real-world lens test isn’t about lab results, but rather about perception.

Obviously a $15,000 Zeiss lens will score better than a $150 Canon Nifty Fifty in the lab, but will you be able to notice the difference where it actually counts?

Making the review more exciting, and harder to guess, a set of mid-range Zeiss Compact Prime cinema lenses was thrown into the mix and compared against cheap Canon EF lenses and anything-but-cheap Zeiss Ultra Primes costing upwards of $15,000.

Since this is a real-world test that was filmed outdoors, rather than using focus charts in the studio, the video clips are compared after the same post and color correction they’d normally receive.

Shot on a Red EPIC at 5K, the comparison videos were played back on a 1080p TV to their DP team and a complete novice.

Take a look at the comparison and see how the pros did:

Below you can watch longer shots of the examples above, minus the talking, and at the end of the video you can check the answers to see how well you did.

If you failed to spot the Canon lens, does that mean it’s as good as the high-end Zeiss? The answer is a definite “depends”. In good lighting conditions and closed down to f/5.6 or f/8, you’re not as likely to notice any major differences.

But as they say, ‘when the going gets tough, the Zeiss lens shines’… or something like that…

Compare these lenses wide open, shoot lights into the lens, flare them – and that’s where the big bucks come into play. Perfect image quality under these conditions is the reason to shell out piles of cash. You don’t need a Zeiss to shoot in good lighting at f/8.

Another advantage of the expensive lenses has nothing to do with image quality, and that’s ease of use. The guys over at JRFS give focus pulling as an example, and how dedicated lenses can increase your chances to pull off the shot you’re aiming for.

This test was video oriented, but the point is just as true for stills photography. If you’re debating between the 70-200mm f/2.8 and the 70-200mm f/4, don’t be tempted by the larger aperture if you never plan on shooting wider that f/8. You’re not likely to see a difference between the lenses at such an aperture, but you will feel the difference in your wallet, and more importantly – on your back.

Same goes for the 24-70mm f/2.8 and the 24-105mm f/4. I’ve lost track of how many people I’ve seen considering both lenses – the first for the wide aperture and the second for its smaller size, lighter weight and cheaper price – just to find out that their cameras are always set using the sunny f/16 rule.

By no means am I saying that higher-end lenses aren’t better than cheaper lenses, but their advantages might not be relevant to your needs.

« Getting Married at New York’s City Hall? Joe McNally Will Take Your Portrait for Free
Photographer Sam Abell Talks about “Cheeky” Richard Prince After Prince Sold His Photo for Millions »