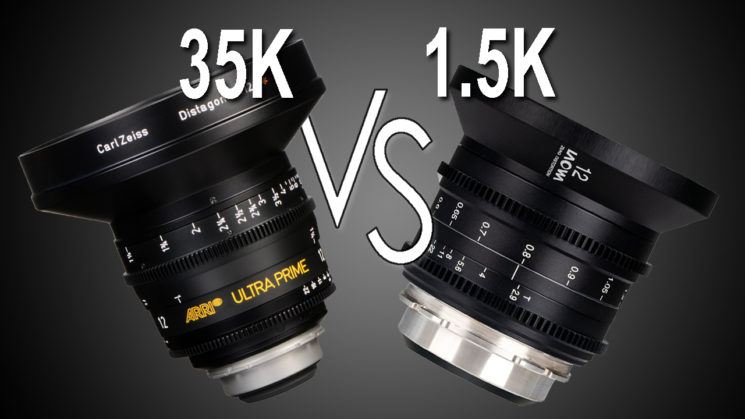 In the last few years, cine-grade gear is becoming more affordable. When I started shooting video, Cine PL lenses were basically a dream to rent. Let alone own. Laowa has been a key player in bridging that gap as they bring their new line of cinema lenses. They really knocked it out the park with their new Laowa 12mm t/2.9 Zero-D Cine. This video shows exactly just how well the $1500 dollar cine lens stacks up against an ARRI Ultra Prime 12mm T2.0 F Lens $35,000 lens.

The video isn’t exactly a deep dive into all aspects of the lens. However, it shows a couple of features a professional would look for when buying a lens of this caliber. The video shows a quick comparison between the two lenses in focus breathing and distortion. The first half of the video shows the test without the lens name. Can you guess which one is which?

The lenses aren’t compared in the field and there are a million more things to look at when buying a lens like this. The reason I’m so blown away by the video, though, is that there isn’t “much” of a difference at all. Remember, the price difference between these lenses is some people’s yearly salary. And yet, it kind of feels like the Laowa has the upper hand here.

It would definitely be nice to see a more in-depth video with these lenses going into battle with real-world scenarios. I would love to see how flare is being controlled in the Laowa. The wider a lens gets, the more distorted glass needs to go in to correct it. All this glass can sometimes create some pretty funky flares (not that it bothers me, I’m on team flare). Other considerations include focus throw, built quality, color, and contrast, to name a few. Every professional has a set that they like. Laowa took the initiative and answered a problem though. When it comes to full-frame/LF ultra-wide, your options are very limited. To add insult to injury to lens manufacturers who didn’t take on the challenge, the lens is what most of the market could agree is; “fairly priced”.

In fact, the widest PL lens that I currently work with is the Zeiss 15mm T2.9mm Compact Prime, a $7,500 lens. A lens I’m not sure I have ever considered buying because of its steep price point. Other than the Zeiss CPs there are other options, but the jump in price can be a factor for renting vs. owning. As a big believer in: “own what you can as long as it makes you money”, $1,500 dollars seems like a hell of an investment. I mean, I spent more on a 70-200… and I did that THREE TIMES! (upgrades! not replacements)

Laowa has been an industry leader in innovation. Pioneering new lens designs in both macro and ultra-wide photography. A few of their lenses have really given photography and videography a new perspective. Lenses like the 24mm f/14 Probe Lens or the entire Zero-D line of ultrawide zero distortion lenses have brought new possibilities with outstanding quality. But most importantly at very affordable prices.

My first lens when I started shooting video was a 24-70, and it cost me about $1,600. So I’m confident that an established videographer would be able to take the plunge on a lens like the Laowa 12mm t/2.9 Zero-D Cine. For only $1,500 you can start to grow your cine-lens kit starting with confidence.

What lenses do you think Laowa should make next to support their Cine-Line of lenses?