A leaked e-mail from Xiaomi CEO Lei Jun reveals that the company is creating its own camera department to compete with other major manufacturers. The CEO apparently considers photography one of the most important features of modern smartphones, and building a better camera will help the company elevate the quality of their phones even more.

Right now, Xiaomi’s latest dual-camera phone Mi Mix 2S is one of the best in its class. In fact, DxOMark gave the device a final score of 97 points and a photo score of 101. Of course, there’s also the newly released Mi 6x which is set to compete with the iPhone X Mi 6x with a better portrait mode and low-light performance. On top of that, there’s the rumored Mi 7  which is poised to eclipse the Mix 2S’s camera. Although it hasn’t been announced yet, the Mi 7 is speculated to have a dual 16MP f/1.7 camera with phase detection autofocus and a dual-tone flash. 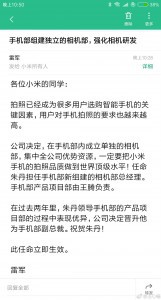 With the leaked e-mail, it appears that Xiaomi isn’t satisfied with what they have accomplished so far and wants to keep improving. From a business perspective, it certainly makes a lot of sense. Despite their achievements, the company still remains under the shadow of Samsung and Apple. At one point, they need to evolve and develop their own personality. Now that they’re apparently investing in a team to develop cameras, I can say they’ve certainly found a good place to start.

Samsung is building its own 1,000fps camera to fight back at Sony

« The beginners guide to creating hyperlapse – the easy way
Looking for a good place to shoot? Try these 9 photography location ideas »