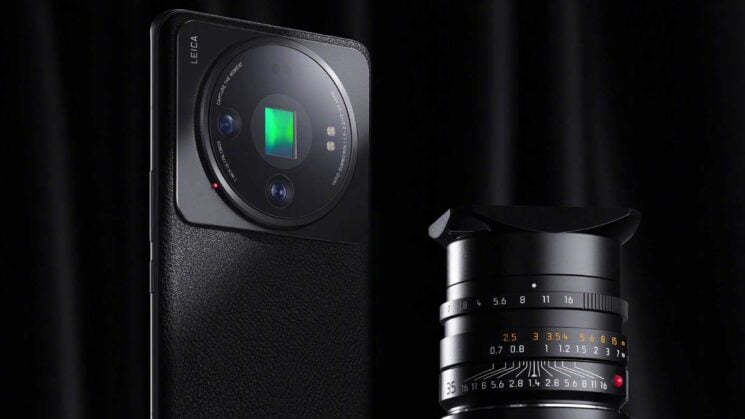 The idea of using a lens from a “real camera” on a smartphone is not new. There have been a number of adapters announced over the years with some as far back as 2014 and older. Most of them haven’t really had an amazing reception, which is why they’re not really all that mainstream today. But mobile photography has come a long way since those early devices. Now, there are a number of 3D printable adapters and other options out there to do this.

Xiaomi, though, is doing away with adapters completely and building an interchangeable lens mount right into the phone itself. Their newest 12S Ultra concept phone sports a Leica M mount with a 1-inch 50.3-megapixel sensor.

It’s a very interesting design and you’re not forced to use it with an M mount lens if you don’t want to. As with most smartphones today, the 12S Ultra concept has an array of lenses and cameras built-in, but the 12S Ultra Concept Phone features two 1-inch sensors. One of these is placed directly in the centre of the array and has had its lens assembly completely removed. The device has had to sacrifice its periscope array to account for this but given that you’ll be able to use pretty much any Leica M lens with it (and a lot of things can be adapted easily to Leica M) that’s not much of a sacrifice if you care about telephoto.

Unlike in a traditional camera where the sensor is exposed when the lens is removed, this sensor does sit behind a protective cover. That way, it doesn’t get damaged in your pocket and you can still use the other cameras as normal when you just want to grab a quick phone shot. But, it gives you more options when you want them.

Phone📱? Camera📷? BOTH!
What would you classify this as? #Xiaomi12SUltraConcept pic.twitter.com/uzJVzifou4

From looking at the promo video and photos above, a protective ring typically covers the built-in Leica M mount on the back of the phone itself when not in use and removing it allows you to attach your lenses. You still need to add a kind of extension tube, though, in order to get the correct flange distance between the back of the lens and the 1-inch sensor contained on the phone.

It’s a pretty awesome concept indeed, although right now it is still exactly that. A concept. There’s been no word from Xiaomi if the idea will ever go into production or not, although Digital Trends reports that Xiaomi says that the 12S Ultra Concept as it stands will not be mass-produced. They also say that had it become a production smartphone, it would’ve cost around $41,000 to make. I’m not sure where DT gets that figure, but hopefully, if such a design does come to a smartphone at some point, the price will be a little more reasonable than that.

Would you buy a smartphone that had a built-in mount to use your DSLR/Mirrorless lenses?