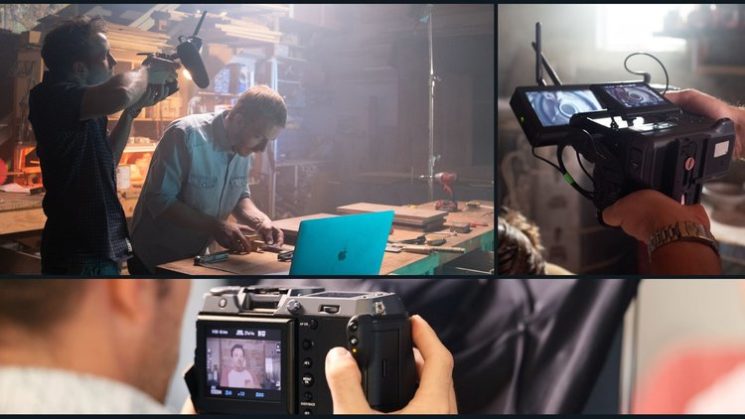 Getting to play with a prototype camera is a little like Christmas morning mixed with Texas Hold’em. There is a childlike excitement in getting to be one of the first in the world to try something totally new, yet it’s also a gamble, and even the best strategy can change with the flip of a card.

You can spend hours preparing for a certain shot, setting up the lights, setting the scene, and then in a flash some odd warning can pop up on the screen and you can’t consult Google or call customer service as, chances are, nobody else has had this problem yet.

Challenging the limits of what’s possible comes with a healthy dose of risk.

The Fujifilm GFX 100 is the world’s first medium format camera that shoots 100-megapixel stills, 4k video, and has in-body stabilization.

Now, many of you are likely not all that interested in the stills, and 4k video with stabilization is cool, but not ground-breaking.

So what’s the big deal?

Well, it all starts with a medium format sensor that is one helluva feat of engineering.

You may recall when the industry went bananas for the Canon 5D, a full-frame sensor that could shoot video. It requires a handful of hacks to shoot — I remember actually shooting a wedding with my lens not fully mounted so I could get a better aperture — but it was a huge step forward, and worth the extra work.

Medium format is another huge step up from full-frame.

Now take that massive sensor and try to fit a contraption that can stabilize movement all inside a compact form factor. Larger sensors are amazing, but they also boast a ton of engineering issues. And what Fujifilm has achieved with their GFX 100 is truly special.

Being one of the first teams in the world to thoroughly test and shoot video with the GFX 100, we persuaded their team to let us write this review and share some early footage.

With that, we do need to share an ethics warning. We are working on a campaign with Fujifilm and as we entered production, that is where we got the chance to test the GFX 100. We advocated for using this prototype camera, asked to do this review, and quite frankly fell in love with the company in the process of developing our story. We weren’t paid for this review, nor is there any affiliate connection, and we had to jump through extra hoops just to bring it to you.

I’m writing this because this is one beast of a camera that I think you need to know about.

After several shoots with the upcoming medium format Fujifilm GFX 100, here is our first impression.

Moving to the GFX 100 was a bit of a return to my roots. I started in weddings with a DSLR in the Canon 5D/7D family, so this camera was both familiar yet also exhilarating.

The first thing you’ll notice when you hold the GFX 100 is just how solid it feels. Fujifilm’s cameras are made by hand, one by one, in a series of factories in and around Tokyo. The camera feels significant and powerful in your hands.

It boasts a myriad of buttons allowing you to access all your critical functions quickly, while also providing the option to program in your favorites.

The screen tilts and adjusts like a real champ, making it easy to shoot video from high or low. Add in multiple exposure and focus controls like peaking and zebra bars, and you’ve got a pretty deadly setup.

Here are the top three highlights of our GFX 100 experience.

That’s me and in body stabilization.

I have used IS lenses. I’ve long been a monopod proponent. And I know what a full Steadicam rig can do.

Yet I didn’t realize how much a stabilization unit in camera could do to open up your creative possibilities. Fujifilm claims a 4-5 stop reduction through their stabilization unit. In my formal testing, I can definitely verify that it’s damn awesome.

Shots that I thought had to have a slider or monopod can now be done fully handheld with proper technique.

And we aren’t talking 24mm wide lenses that are easier to shoot handheld with. I mean crazy shit like a 120mm macro lens HANDHELD. Like, whaaaa?

Having such a large sensor paired with in body stabilization is a special combo and one that has me rethinking what tools I really need on a shoot.

Check out this little video from an upcoming series of stories that are shot almost entirely handheld with the GFX 100.

I may be alone on this one, but I’m tired of the resolution race. I don’t want 6 or 8k. I want to tell a great story that I can edit on my laptop while traveling.

It’s somewhat ironic that our resolution races higher and higher while our viewership moves more online and social.

Your audience doesn’t care about your megapixel count nearly as much as they want to feel something. And that is why you can make a solid case for the compression being used in your camera. An overly compressed image lets you record far more, yet leaves far less room in post.

I am definitely a huge proponent for using elements like color and composition to push your story, and so I love that the GFX 100 gives you some real latitude to move your image in post.

We’ve been shooting a DCI 17:9 10-bit 4:2:0 4k image in camera at 400M/sec and have been very excited with the results. If you don’t know what all those numbers mean, the basics are that the in-camera codec retains a great deal of color and luminance data, and we all know how important light and color are.

Film simulations that are about far more than likes

Okay, I’ll be super real with you.

When we started working with Fujifilm I had thought that these film simulations were simply an Instagram filter with a clever marketing spin.

Then I got to meet Sam Minami, a man who is so obsessed with color that he often walks around with a color meter in his pocket. The man will take images with a series of film and digital cameras, along with his colorimeter reading, and then send notes back to the Fujifilm factory for improvement.

All of this and the dude has been retired for a solid 8 years. Yeah, that’s a passion for color.

Fujifilm’s film simulations are a multi-year project that Minami-San took on shortly after the digital revolution. The goal wasn’t to make something look cool or to get the most amount of likes, it was about creating a feeling within your image that didn’t need to be adjusted afterwards.

The team at Fujifilm coined the term ‘memory color’ which means how we remember the colors of a moment as opposed to how they actually were.

A birthday party, for example, would be rather vivid and warm, whereas a funeral would be remembered in a far more subdued palette.

Fujifilm’s film simulations are all based on real film stocks and are intended to help you communicate the emotion of a moment.

I was personally rather skeptical at first, and then we started testing out various simulations and found that it really did let us say so much more to truly convey a feeling.

Check out this short scene shot with Velvia Vivid stock, straight out of the camera with no processing.

What’s extra cool is that you can run an external recorder at 4:2:2 with or without the film simulation. So that means you can choose the feeling you want in-camera and then also run a feed to record with a wider color space and record in something like F-log for tons of latitude in post.

We tried this several times for our interviews and, more than anything, having the flat F-log backup makes you feel more comfortable to really push your image in camera.

As the Muse team moves forward, we’ll be using the GFX 100 on far more shoots over our Red Gemini. It’s smaller, quicker, and offers the ability for a stronger image in-camera.

That said, it’s also worth noting that your lens selection is somewhat limited. A sensor this large requires lenses that can handle that, and there aren’t as many of them.

If you also recall that the lens aperture is a ratio related to the size of the opening of the lens, it would follow that a larger sensor also requires larger lenses. You’ll find that many GFX lenses offer a 2 to 2.8 aperture which might be surprising until you consider the monster of a sensor.

Depth of field comes from a lovely concoction of sensor size, aperture, focal length, distance to your subject, and the subject’s distance to the background. The GFX won’t offer you the brightest lenses at 2-2.8, but you need to take that in relation to a sensor that is 1.3x full frame and 4x a Super 35mm sensor, so overall you’re getting a pretty massive boost in depth of field. 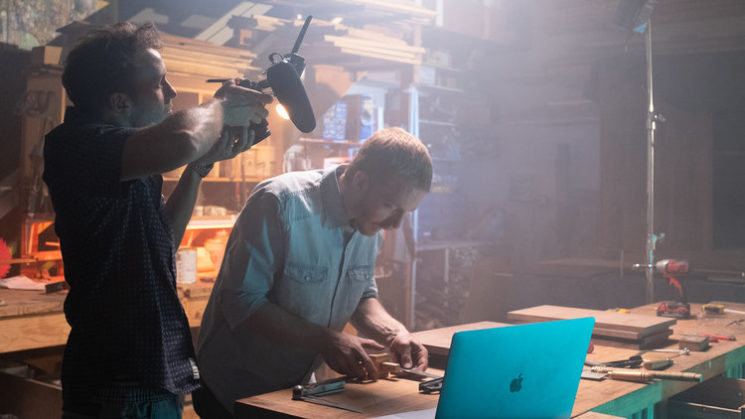 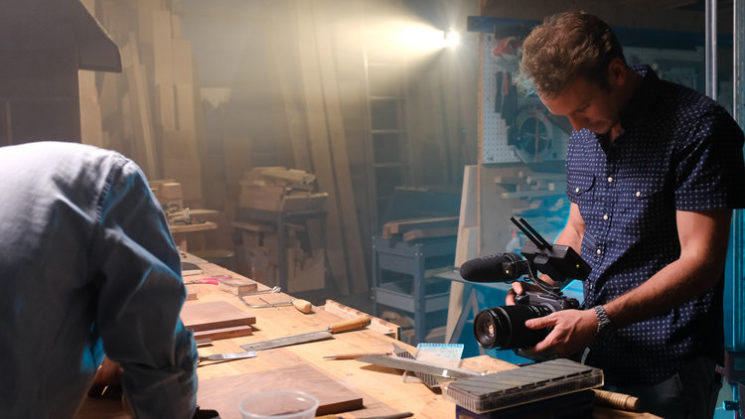 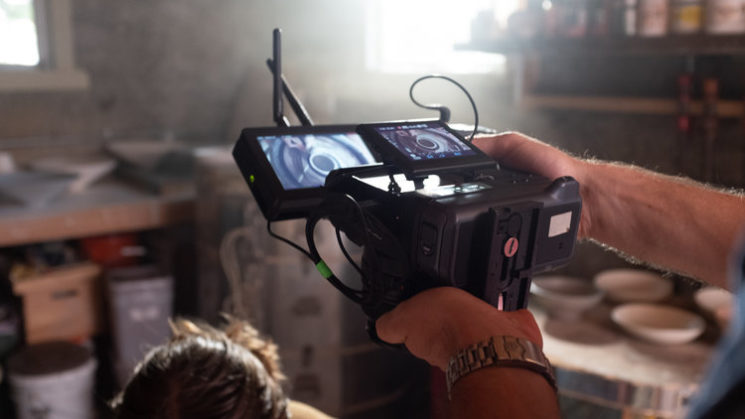 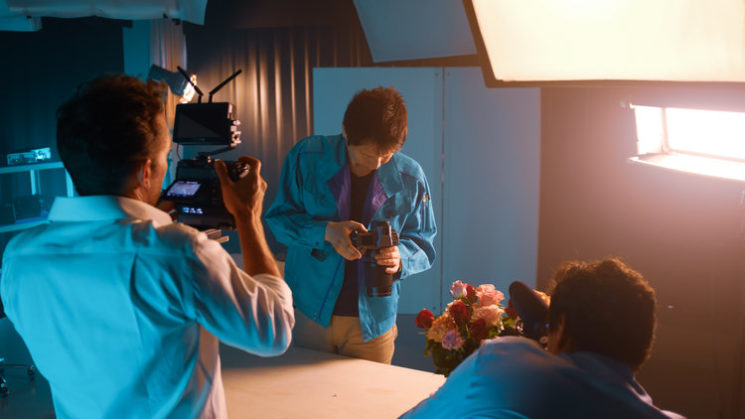 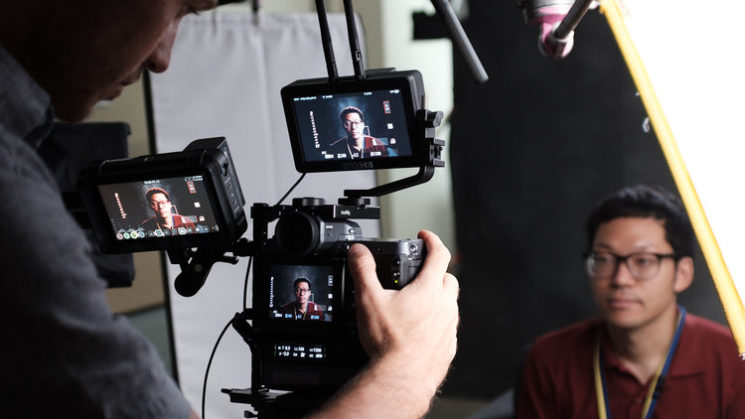 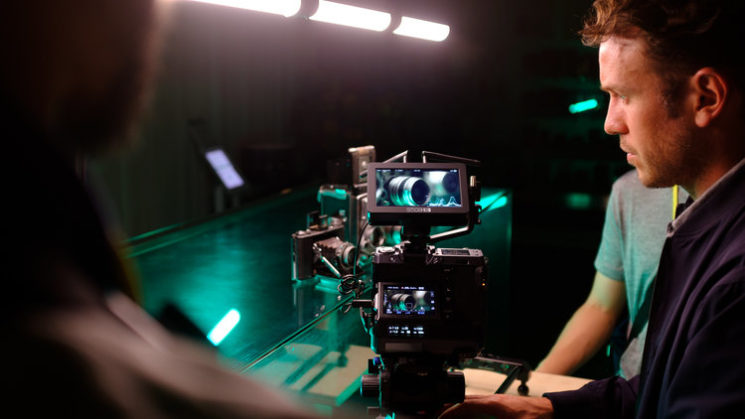 Patrick Moreau is the founder of Muse Storytelling. He’s obsessed with story and believes it is unparalleled in its ability to bring people together. He’s directed several documentaries, won a few Emmys and loves the craft of filmmaking. This article was also published here and shared with permission.

Fujifilm registers designs for the modular GFX-X Omega medium format mirrorless camera
« This is what the underwater world looks like when filmed by a turtle
No women were around for this group photo of Silicon Valley execs, so they Photoshopped some in »