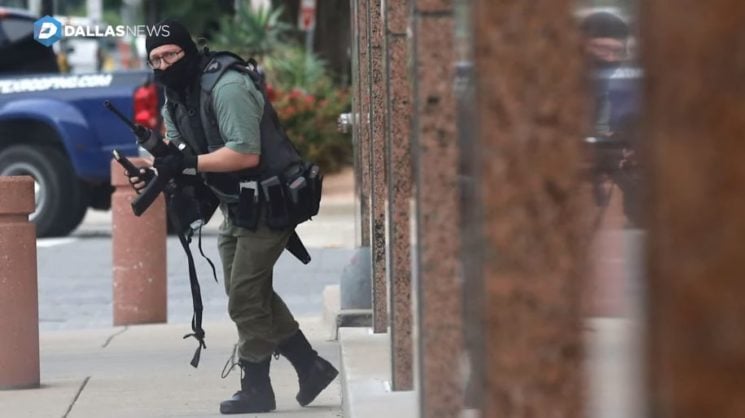 On Monday 17 June, a masked gunman opened fire at a federal courthouse in Dallas. Tom Fox, a Dallas Morning News photographer, was just a few feet away from him. He managed to capture a photo of the heavily armed staring straight into his lens, and it’s as impressive as it’s chilling. In the video below, Fox speaks out about his encounter with the gunman and his thoughts during the tense moments.

According to multiple resources, Fox was at the scene to get a photo of a defendant in a charter school fraud case. But the photographer recalls that he heard gunshots and then saw a figure. He couldn’t see the details, but he took his camera out.

“I pulled up my long lens and saw someone who I realized was the shooter,” he told the Dallas Morning News. “I squeezed off a few frames as he picked something up – a clip, I think – and then I turned and ran.”

The photo gave me chills, as the heavily armed man stares straight into Fox’s camera. But a witness named Tim Brown shared a video that shows the event from a different perspective. In this video, you can see just how close Fox was to the shooter, and it’s terrifying to watch. I can’t even imagine how terrifying it was to be there.

Fox added that he kept thinking that the gunman was going to see him around the corner and shoot. He thought he was “gone,” but he felt relief once he saw an officer approaching. The gunman was identified as Brian Isaack Clyde (22). It has been confirmed that he was shot dead by the police shortly after opening fire.

This situation immediately reminded me of Burhan Ozbilici who documented the assassination of Russian Ambassador to Turkey. He was also just a few feet away from the assassin and his chilling image won him the 2017 World Press Photo of the Year award. I find both these situations incredibly scary, and Fox’s image gave me chills due to eye contact. I’m glad that he’s alive to tell the story, and I believe this photo could be a candidate for the next World Press Photo of the Year.

« No women were around for this group photo of Silicon Valley execs, so they Photoshopped some in
Lensbaby’s new OMNI filter system isn’t like any kind of filter system you’ve seen before »