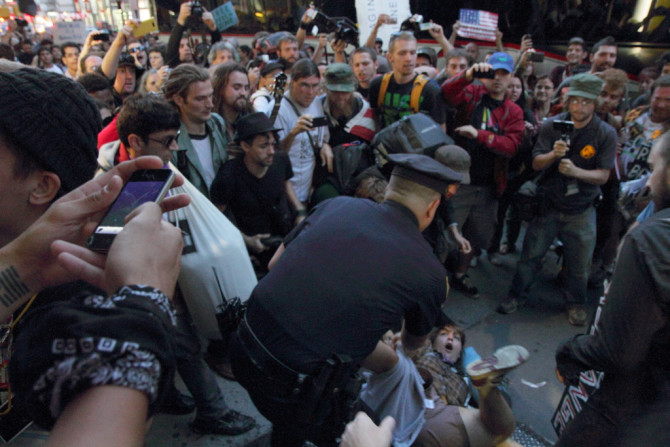 Texas representative Jason Villalba introduced a bill that will restrict the public’s right to record police activity, and turn photographing or recording the men (and women) in blue into a class B misdemeanor. The 25 feet limit jumps to 100 feet for armed photographers.

Villalba claims the sole purpose of the bill is to protect officers in the field, but free speech advocates are enraged.

Certain exceptions are made, allowing very specific media types to photograph police from any distance.

Texans take great pride in their freedom-loving state but House Bill 2918, filed in the Texas House of Representatives on Tuesday by Villalba (R-Dallas), threatens to change that.

The proposed law wishes to expand the current “INTERFERENCE WITH PUBLIC DUTIES” statute (Section 38.15 of the Texas Penal Code) which makes it a crime to interrupt, disrupt, impede otherwise interfere with an officer performing his official duties.

If the bill passes only news media meeting the following criteria will be exempt and allowed to record within 25 feet of police activity:

“(A)  a radio or television station that holds a license issued by the Federal Communications Commission;

(B)  a newspaper that is qualified under Section 2051.044, Government Code, to publish legal notices or is a free newspaper of general circulation and that is published at least once a week and available and of interest to the general public in connection with the dissemination of news or public affairs; or

(C)  a magazine that appears at a regular interval, that contains stories, articles, and essays by various writers, and that is available and of interest to the general public in connection with the dissemination of news or public affairs.”

Another section of the bill refers to the 100 feet limit, and also exempts a person working for an organization engaging in law enforcement activities:

“(1)  filming, recording, photographing, or documenting the officer within 25 feet of the officer; or

(2)  filming, recording, photographing, or documenting the officer within 100 feet of the officer while carrying a handgun under the authority of Subchapter H, Chapter 411, Government Code.

(g)  It is a defense to prosecution for an offense under Subsection (a)(1) based on conduct described by Subsection (f)(2) that the interruption, disruption, impediment, or interference was caused by a person who, at the time of the offense, was:

(1)  a news media employee acting in the course and scope of the person’s employment; or

(2)  employed by or working with an organization or entity engaged in law enforcement activities.”

So not only private citizens will be banned from recording the police; so will bloggers, independent journalists and online media. In other words: anybody who might actually be there when spontaneous shit hits the fan and the police might be overstepping its boundaries.

Don’t get me wrong, I don’t think people should be allowed to stick their smartphones in an officer’s face while he is trying to arrest someone. But if that officer is using excessive force or abusing his power, I want the evidence to be recorded from 3 feet away, not 25.

How was the arbitrary distance of 25 feet selected? How will this be measured and enforced? Can an officer come within 25 feet of a person who’s recording him simply to force that person to stop or step back?

This bill is not only controversial but also very difficult to uphold. It just doesn’t seem to hold water.

If a private citizen unobtrusively records police activity from a few feet away, how is he any more of an interference than a representative of the “approved” media?

You could say that the public’s right to know trumps a bit of an inconvenience for police officers, but then why not allow a certain amount of people to record police activity with set a hierarchy, with accompanying guidelines ensuring that any interruption is kept to a minimum?

Why not allow private citizens to document what’s going on until authorized media arrives?

This just doesn’t make any sense. The current statute already bans any activity that gets in the way of police work, so why not spend the time to educate police officers what constitutes an interruption, disruption, impediment or interference with their work? If it’s too ambiguous, why not set clear guidelines?

In a democratic society laws should be as least restrictive as possible while still achieving their goal, and allowing police to do its work is definitely a worthy goal.

That being said, defining any and all recording by private citizens or unauthorized media within 25 feet as interruptive is unfathomable and cannot be accepted.

Next thing you know 25 becomes 250, and an exemption to record police activity becomes a permit to sketch instead.

Villalba said that his bill “just asks filmers to stand back a little so as to not interfere with law enforcement”, but last I checked criminalizing a certain act is not the same as asking someone not to do it.

As mentioned, the current statute already bans interfering with an officer on duty, so police are free, even obliged, to arrest anybody who does so. No court will dismiss a case of legitimate interference with police work.

The problem is not that the police are not protected enough; it’s mainly that some members of the police too often allow themselves to do as they please and this bill will make it easier for them to continue doing so.

When asked how this bill came about, Villalba responded that “It came about because my brothers/sisters in blue asked for my help to protect them. I did what I could to help”.

A better way to help his “brothers and sister” would be to educate them, educate the public and probably educate himself as well.

Hopefully this bill will not pass, but the mere proposition will certainly add to the growing resentment against law enforcement.

After the courts have made it clear that it is legal to record policemen in the line of duty, and that these rights extend to private citizens as well, they may soon have to decide if setting an arbitrary, difficult to measure limit on these rights is not in violation of the Bill of Rights.

I’m not saying you should email, call or fax Villalba with your opinions on his bill, but you can get all his contact info right here if you wish to do so.

Just last week we reported that the U.S. Government paid the Blade newspaper $18,000 after unlawfully seizing cameras and deleting photos. I guess they should have simply banned photography altogether and saved the cash…

You can read the entire bill below: