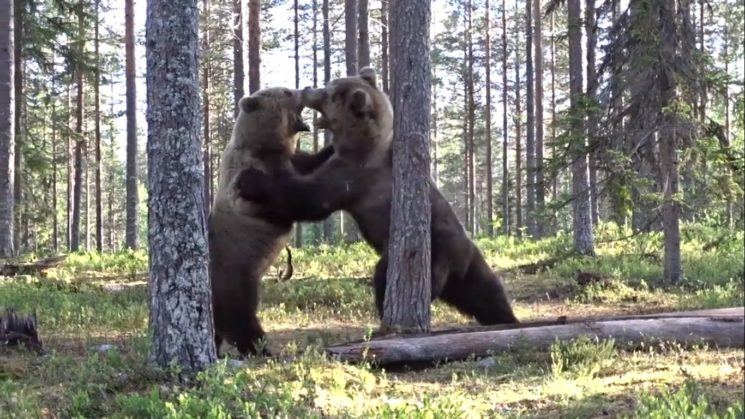 We’ve seen some pretty wacky, scary, and plain stupid encounters of photographers and bears. Finnish photographer Tero Pylkkänen was lucky enough to capture a video of two bears fighting in what he called “best bear fight ever.” Two large brown bears started testing each other’s strength just feet away from the photographer, and he caught their fight on camera.

Tero was on a vacation with his family in Kuhmo, Finland. As he told Iltalehti.fi, they were located next to the bear feeding place at Boreal Wildlife Center when the epic fight began. Although he’d previously seen bears fighting, this was the first time he saw it from such a small distance – just 33 feet (ten meters) away from him. “Everyone except me saw that night the bear for the first time,” he told Iltalehti.fi. “Even my heart began to pump and I felt the adrenaline, so I can only imagine how exciting it was for the others.”

The photographer explained that, although the fight looks pretty rough, the bears’ goal generally isn’t to hurt each other badly. He added that bears fight to determine “which one’s the boss,” even when the mating season is over.  Nevertheless, the fight does look epic, and these animals are truly impressive. Tero managed to capture three minutes of the fight and make sure to check it out in the video above.