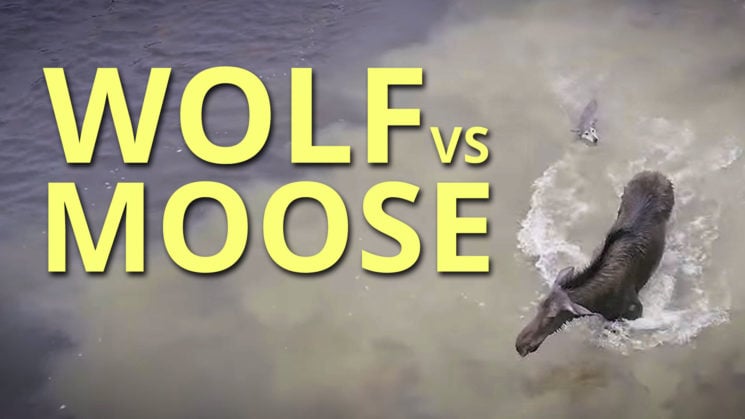 Nature holds so many amazing sights the world never gets to see. Thanks to the proliferation of digital cameras and drones in the last decade or so, though, now there’s the chance that we can. It’s not that there are more people going out and looking for these sorts of things. When they do happen, though, it’s more likely that somebody’s got a camera handy to film it.

In this particular instance, that somebody is Ontario resident, Dan Nystedt. While out filming with his Phantom 4 Pro recently at Achigan Lake, Dan came across a moose. This moose sighting already excited him. But he definitely wasn’t prepared for what happened next, as a wolf comes running out of the trees to attack.

The whole ordeal goes on for over 5 minutes, starting with the wolf running out 42 seconds into the video. It’s pretty intense to watch as battle ensues.

The wolf eventually bites and does get a good grip on the moose’s leg. It clings on for a whole minute, despite the moose attempting to kick him off. Eventually the moose gets smart (or just lucky) and moves toward deeper water, dragging the wolf under. The wolf has no choice but to let go.

For another three minutes, the wolf gives chase, swimming through the water after the moose. But he finally gives up to rejoin another pack member. So, the moose survives, and hopefully the wolves manage to find a meal elsewhere to tide them over.

It’s pretty crazy to think that a lone wolf will take on something like a big, strong, healthy moose. It most definitely could’ve gone a lot worse for the wolf.