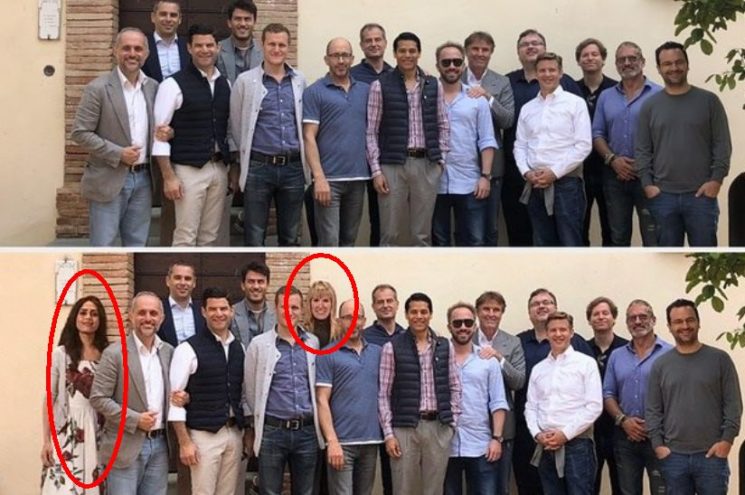 Earlier this month, GQ magazine published an article about a group of tech titans who visited Brunello Cucinelli’s Italian village. The photo following the article showed fifteen men and two women from Silicon Valley. But something about the photo looked off. And indeed, it was – there were actually no women in it, they were Photoshopped in before the photo was published.

The photo first appeared on Brunello Cucinelli’s Instagram, and it was later used as the lead image for GQ’s article. Honestly, it’s not difficult to notice that something looks strange, so it’s no wonder that people quickly started to dig deeper, trying to discover whether the image had been doctored.

BuzzFeed’s tech reporter Ryan Mac did some research, along with a couple of Twitter users. After running some checks, it turned out that both women were added digitally to the photo that originally depicted fifteen men. The woman on the far left is Peek CEO Ruzwana Bashir, and the woman in the middle is SunRun CEO, Lynn Jurich.

I got some questions about this story on "tech titans" in Italy, and uhhh I think this photo is photoshopped?https://t.co/xLrslOCcwh pic.twitter.com/n0gIShty4u

Not long after the image was busted for being (poorly) Photoshopped, a Cucinelli representative sent a statement to BuzzFeed:

“When we realized we didn’t have a shot where all attendees were represented, we added in photos of two female CEOs taken during the weekend. The photos were shared and approved with all the participants including the two women, Lynn Jurich and Ruzwana Bashir, before posting them on Instagram and they also shared the group photo on their own Instagram handles. We meant no harm or had any malicious intent in doing this and we are sorry.”

One of the attendees at the event was Amazon CEO, Jeff Bezos. Seeing as he wasn’t in the group photo either, BuzzFeed asked why he wasn’t photoshopped in along with Jurich and Bashir. According to the spokesperson, he declined to be included in the photo, so this is why he was left out.

As you might expect, this story has caused a significant public backlash. According to Recode, women typically make up about a fifth to a quarter of tech and leadership roles in tech companies. While the battle for diversity in the industry is ongoing, Recode notes that not much has changed. “This is a culture problem that’s keeping women out of tech — it’s sexism, racism, harassment, discrimination, bias. And this Photoshop story is the perfect illustration,” said Deborah Singer, chief marketing officer at Girls Who Code. “What’s so deeply ironic about this Photoshop scandal is that in the time it took them to Photoshop Lynn and Ruzwana into the photo, we could have recommended 100 women for them to actually invite and include,” she added.

Women’s Foundation tweeted a cheeky reaction to the incident: “Pro-tip for Silicon Valley boys club: hire more women into tech and you won’t have to photoshop them in.”

Pro-tip for Silicon Valley boys club: hire more women into tech and you won’t have to photoshop them in. 💁🏾💁
"This Picture Featuring 15 Tech Men And 2 Women Looked Doctored. The Women Were Photoshopped In." >> https://t.co/AfYktLyCMH pic.twitter.com/KNwDaxMayO

I am honestly surprised by this move and I have so many questions. First of all, why hadn’t they invited women to the event in the first place? And if they hadn’t invited them, why would they Photoshop them in? To appear diverse and prevent any possible backlash? And then, since they decided to Photoshop women into the scene – why did they only add two of them? My opinion on the last point is best articulated in a tweet by Elizabeth Spiers. In her response to Mac’s tweets, she wrote: “Also kind of amazing that they thought, ‘two women, fifteen men. Yeah, that’ll check the diversity box!’” All in all, I think that this is just wrong on so many levels.

This is what happens when men are Photoshopped like women